Trapped on the Alley Theatre's Tarmac 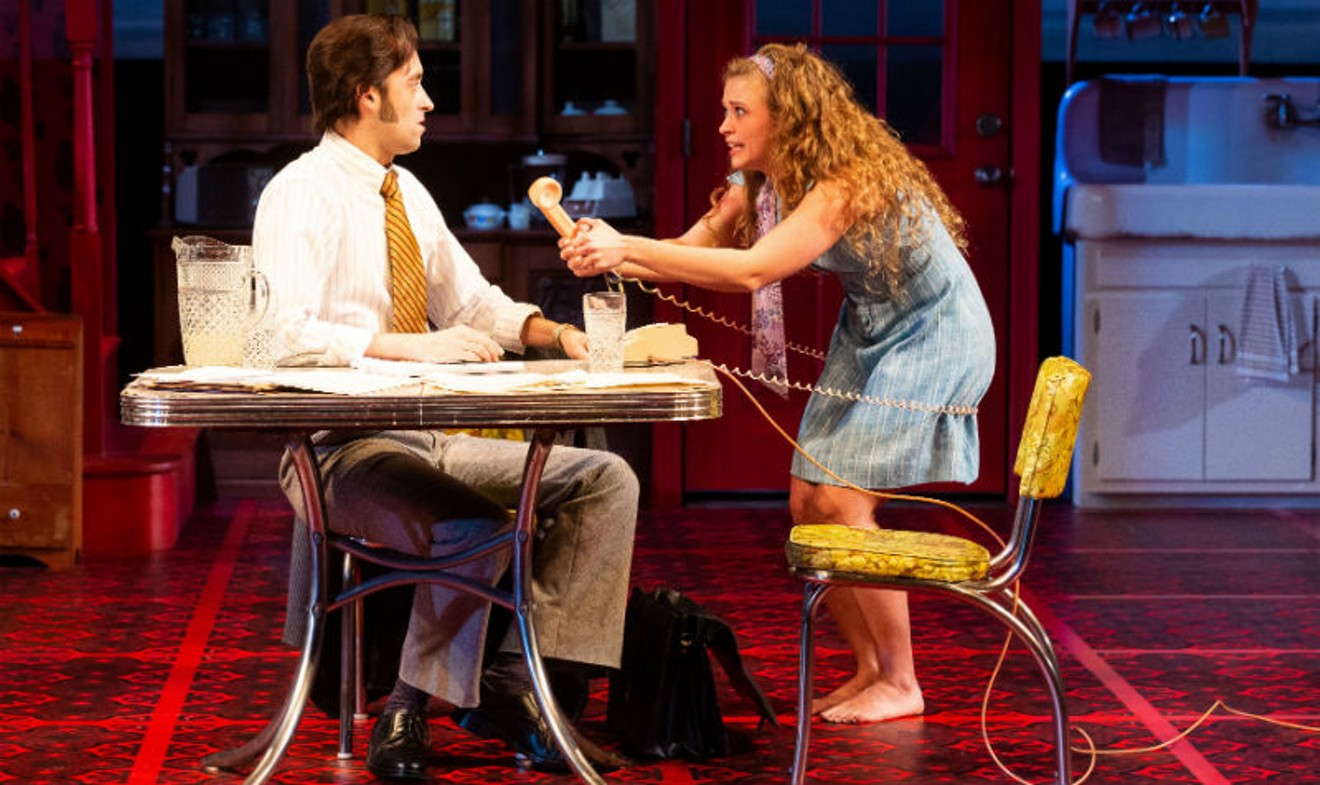 Dylan Godwin and Skyler Sinclair in Crimes of the Heart. "Is this play ever going to start?" Photo by Lynn Lane
Ever been trapped on the tarmac at an airport, sitting in regular seating, while the first-class passengers continue to get their drinks and no, you can’t use the bathrooms? Alley Theatre, sad to say, grounded a lot of its audience in the same way Wednesday night.

It’s not uncommon for a play or musical at the theater to start a few minutes late on opening night. Maybe there’s a last-minute costume or wig adjustment that needs to be made. Perhaps the set is missing a piece or the sound system isn’t quite right.

But last night, at the opener for Crimes of the Heart, none of those factors was in play and still the play started a whopping 30 minutes late. Had one of the cast members become suddenly ill and have to be replaced?

The reason: Alley Board members and donors had a pre-show dinner and it ran late. Presumably they were having such a good time.

The further reason delivered this morning: Valet issues with more people arriving to valet than expected that caused a backlog and delay of events. At least several of those valet users were probably attending that special dinner.

We know these reasons because we asked. But the audience was never told any of this last night. They were left in the proverbial dark about why they had to sit for so long. Stage announcements are not unusual. Couldn't someone have explained the situation and freed us from our moorings?

At 15, 20 and 25 minutes AFTER the play was supposed to start (with supposedly no late seating), throngs of people (big dinner) started filing in. They were all jovial and happy, well fed and clearly well-watered. Who wouldn’t be? They made their way to their seats at a leisurely pace and finally settled in. And at 8 the play started.

Gracious and beleaguered ushers made their apologies to any patron who asked what was going on and in response to a query from the Houston Press, the Alley press office issued two explanations and an apology for the inconvenience. Of course, none of these people were in charge of making the decision to delay the play.

Doors opened at 7:15 and the people who came in then ended up sitting for 45 minutes with no play. Many checked their tickets, Googled the Alley site on their smart phones and confirmed they hadn’t been mistaken, the play was supposed to start at 7:30. They couldn’t risk getting up to make an extra bathroom run or get a drink because the play was going to start any second.

Several years ago most theaters in Houston switched from an 8 p.m. to a 7:30 p.m. start on nights before a work day in recognition of the fact that most people didn’t want to stay up quite that late and drag themselves into the office or get the kids off at the crack of dawn the next day.

It’s one thing to attend a rap concert where everyone going in knows the artists are fairly certain to get on stage much later than the official start time and people can leave their seats and go to the bathroom, the concession stands and the merch tables.

If it had been a rap concert people could have started shouting “Start the show! Start the show!” But this was the theater and we were all too polite for that. Maybe we shouldn't have been.

This isn’t what these people were buying into when they purchased tickets to see a Beth Henley play at the Alley. They expected a show to start on time and time, as we all know, is important to everyone.

The Alley has a gifted company of actors and is a treasure for this city. And yes, the donors are an important part of that since ticket sales don’t come close to covering the cost of a production. Donor names are in the playbills and when prompted, audience members enthusiastically clap for their corporate and individual support.

And granted, sitting for an extra 30 to 45 minutes of nothing (except for music that started as a pleasant enough trip down memory lane and ended up being a grating reminder that the-play-was-not-starting) is not the worst of all fates. Nobody died. But the high-handedness of not even addressing the audience from the stage, to do all those people the basic courtesy of explaining what was going on — why did that not even occur to the Alley?

Last night was a misstep for a theater company that works so hard to spread the message that theater is for everyone – not just for the affluent. Everyone is welcome, come as you are, be captured by live theater.

Well a large part of the audience was clearly captured last night.
KEEP THE HOUSTON PRESS FREE... Since we started the Houston Press, it has been defined as the free, independent voice of Houston, and we'd like to keep it that way. With local media under siege, it's more important than ever for us to rally support behind funding our local journalism. You can help by participating in our "I Support" program, allowing us to keep offering readers access to our incisive coverage of local news, food and culture with no paywalls.
Make a one-time donation today for as little as $1.