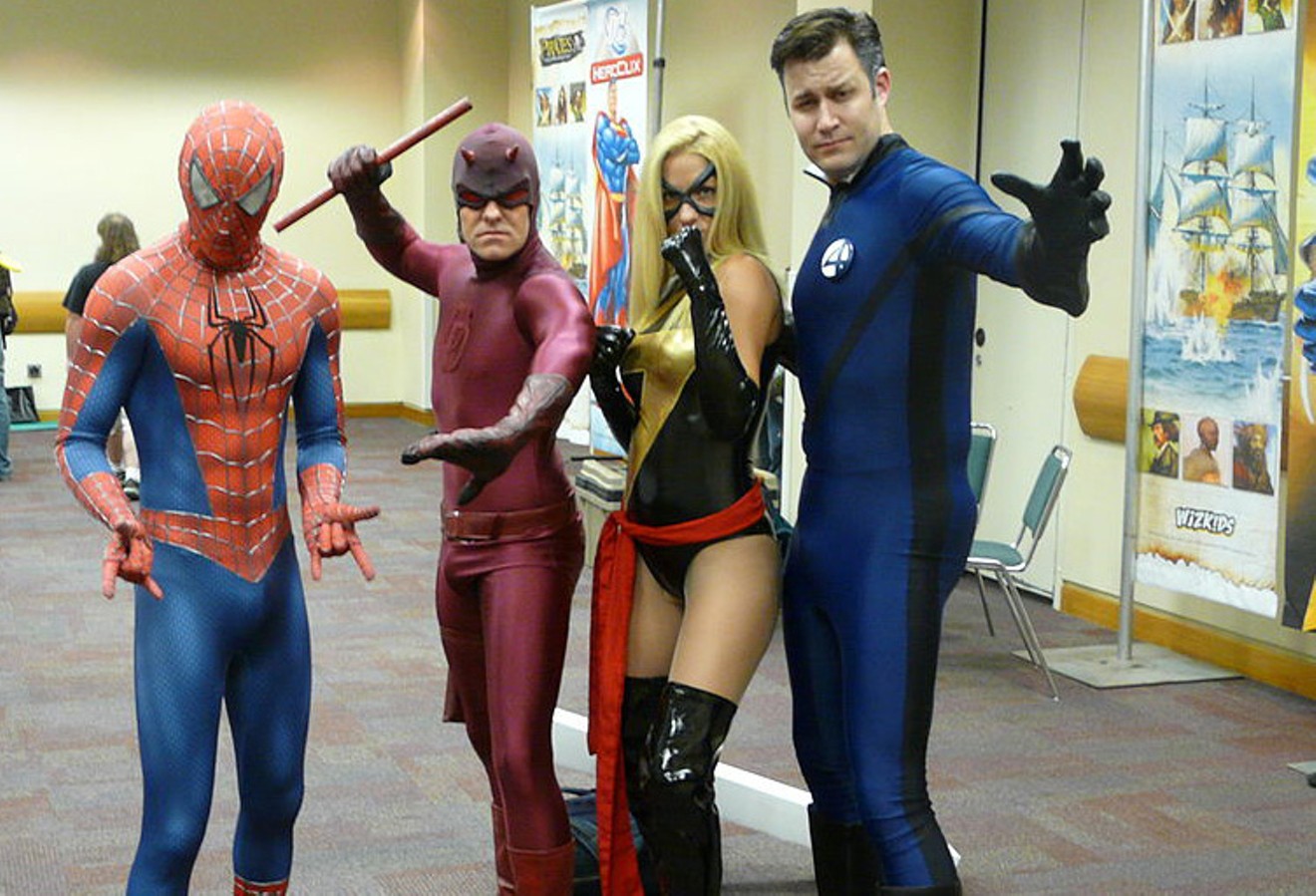 As comic book fandom and conventions have gone mainstream, it's no surprise that Cosplayers - likes these Marvel fans in Indianapolis at GenCon - often come as Marvel and DC characters. But the rival companies have waged their own half-century battle for dominance. Photo by Piotrus/Wiki Commons
Slugfest: Inside the Epic, 50-Year Battle Between Marvel and DC
By Reed Tucker
Da Capo Press, 304 pp., $27

Any kid or teenager in the mid-‘60s had to answer certain questions firmly, and stand on one side of: Beatles or Stones? Coke or Pepsi? First Darren or Second Darren from Bewitched?

But perhaps no question was more crucial or told more about a person than the immortal query “Marvel or DC?”

Sure, DC had the history, the iconic characters (Superman, Batman, Wonder Woman) and tradition, with the smug superiority of a company run more by business-executive than creative types. Its heroes were consistently square-jawed, morally incorruptible, always on the side of right, and neatly wrapped up any adventure in a single issue. 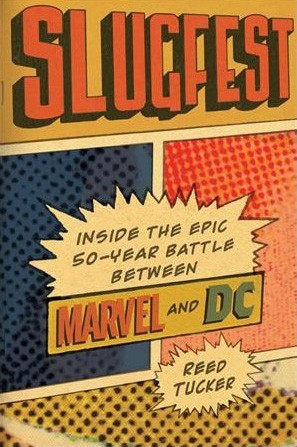 Book cover by Da Capo Press
Then along comes upstart Marvel with its hipper look, chummy staff, multi-issue stories, reader interaction and – gasp! – superheroes that fought among themselves and had real-world problems. Spider-Man could save New York City from destruction. But Peter Parker? He couldn’t get a girl to give him a second glance and was bullied. And two entire pages consisting solely of Peter talking to his aged and always-near-death Aunt May? Unheard of! Excelsior!

Reed Tucker’s insanely readable Slugfest is positively crammed with the kind of history, skulduggery, drama and conflict between the two mortal publishing enemies that has the makings of…well…an amazing comic-book story. Using both original and archival interviews with dozens of writers, artists, editors, executives and industry insiders over the decades, it’s utterly compelling reading for any current or former comic-book geek.

All the great legends are here: The Jack Kirby defection, the Captain Marvel vs. Shazam legal battle, character rip-offs, staff poaching and the checkered history of Marvel/DC crossovers. Houston even gets a shoutout with the mention of the 1969 opening of Roy’s Memory Shop off 59 and Shepherd, one of the first comic-book specialty stores in the country. I recall how excited I was on my first visit there as a pre-teen — I begged my father to take me, the distance between there and Spring seemingly staggering at the time. The location is now home to Nan’s Comics & Games Too.

Full disclosure: I have not purchased comic books since the late ‘80s. But over a decade prior I had amassed a 6,000-strong collection, attended all of the cons that came to Houston, held my weekly subscription to The Comics Buyer’s Guide and even worked for a local comics “dealer” who paid me in books. (Hi, Harold Starbuck!)

As the years progressed, each company began to take on some characteristics of the other. Marvel began flooding the market with product (i.e., books with “X” or “Spider” in the title), and DC went for edgier fare like Sandman, Swamp Thing and Frank Miller’s groundbreaking The Dark Knight Returns.

But as the comics industry reached new highs in the early ‘90s as specialty stores became epicenters for fans (and earning higher profit margins for Marvel and DC), both companies began to feel the influence of corporate, business-driven controlling interests. If fans would plunk down money for an important comic, why not put out five different covers of the same issue since the hardcore fanboys would eat it up?

Tucker writes how it reached ludicrous proportions with Marvel and DC offering books already sealed in plastic bags with cards, holograms, cover variants, even cheap plastic jewels embedded in the covers. The ‘90s were also the era of comic “investors” who would buy 100 copies of a book thinking they could resell quickly and fund their kid’s college career.

Comic book movies have become hot properties in recent years, easily eclipsing the actual comic books. Here are several of DC's Wonder Woman at the 2016 New York Comic Con.
Photo by Richie S/Wiki Commons
Unfortunately, they didn’t quite grasp the most important rules of what actually makes collectibles valuable: the desire for something that is scarce. If you’re still waiting for that box of “The Death of Superman” issue to turn to gold…forget it. And with the huge success of 1989’s Michael Keaton-starring Batman movie, it was merchandising and products that promoted and supported the character’s comic book, not vice versa.

Unfortunately, relations between Marvel and DC got even worse after the turn of the century, now with the new business-minded cock-swinging alpha-male executives openly insulting each other and encouraging their company’s fans to challenge and belittle the others’ at every turn, especially on social media.

By book’s end, the present day, Tucker posits the theory that publishing actual comic books has become secondary (or less) to Marvel and DC as companies since the greater emphasis now goes to building and maintaining film and TV offshoots (and the associated merchandise).

But his look at the greatest superhero battle of all is ultimately fun, fast-paced and filled with the kind of juice that will make any current or lapsed four-color fan salivate. Reading Slugfest instantly brought me back to those early days of fandom, well before comic-book nerds were considered in any way “cool.” And most of the cast of The Big Bang Theory were mere toddlers.