Ash vs. Evil Dead Is A Better Show Than The Walking Dead But None Of You Ingrates Watched It 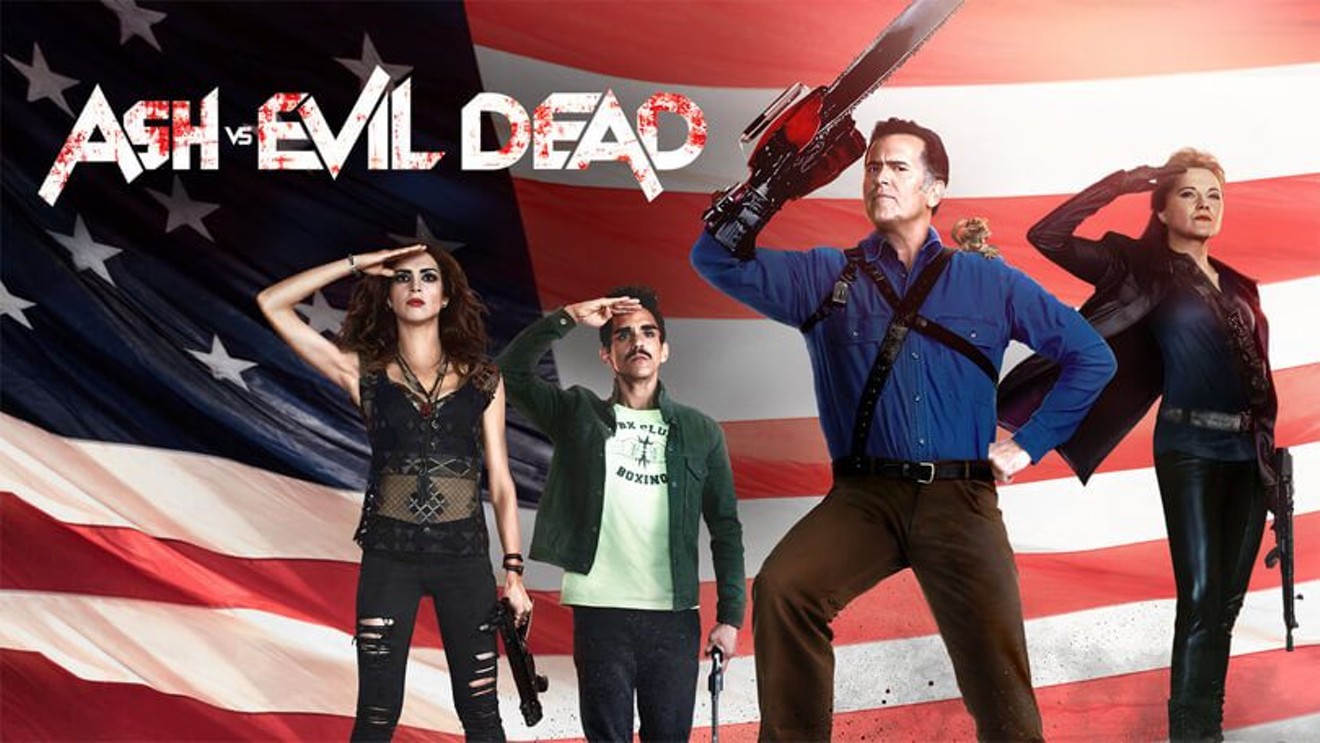 Starz
Starz has lowered the boom(stick) on the three-season running Ash vs. Evil Dead:

Starz has opted to cancel Ash vs. Evil Dead, its small-screen offshoot of the Evil Dead films. The Sam Raimi and Rob Tapert gore-filled comedy's April 29 season three finale will now serve as its series wrap-up.
[...]
Always renewed for an additional season before its premiere, the comedy launched in 2015 to 437,000 same-day viewers. Never a ratings breakout, Ash's ratings haul has dwindled over the years, with its April 15 installment slipping to 175,000 viewers (sans DVR).


175,000 viewers. By contrast, the April 15 episode of The Walking Dead scored 7.92 million, possibly because this was the only episode of Season 8 where something sort of happened.

The prospects for Ash vs. Evil Dead were always a long shot. The three films it's based on are perhaps the very definition of "cult success," earning their legacy largely on video and cable (I personally first saw the 1981 original on a well-worn Blockbuster VHS tape in the mid-80s). The lead character of Ashley Joanna Williams, played with utter perfection by Bruce Campbell, is a ridiculous blowhard and boor who also has a special knack for combating the legions of Deadites unleashed by the unholy Necronomicon Ex Mortis across space and time (thought mostly Elk Grove, Michigan or medieval Europe).

The Walking Dead, on the other hand, follows a band of survivors through a zombie apocalypse. Led by the increasingly erratic, morally ambiguous, and charismatically deficient Rick Grimes (Andrew Lincoln), they stumble from largely avoidable conflict to largely avoidable conflict when not beating the show's "HUMANS ARE THE REAL MONSTERS" message into the audience's delicious brains.

This leads to one big argument favoring AvED over TWD, and that's how enthusiastically the former embraces its absurdity. The Walking Dead is a grim deathmarch through the denouement of mankind, whereas Ash vs. Evil Dead is a nitrous-fueled amusement park ride. Both films leverage horrible body trauma, but while TWD's VFX are notable for their horrific realism, the gore in AvED is nothing short of inspired:


Is the concept of an ancient Tome of Evil (TM) bringing forth demons to possess the living and then be ritualistically slaughtered by chainsaw, shotgun, or Delta 88 realistic in the slightest? Of course not. And yet — and this one's for the weirdos on Doomsday Preppers — neither is a freaking zombie apocalypse, I don't care how authentically annoying the characters are (RIP, Carl).

Season 8 of TWD just wrapped up, and by all (charitable) accounts it's the second season in which pretty much nothing happens (see also: Herschel's farm). You've got to hand it to AMC: going over the same narrative ground for a full one-quarter of your show's run is perversely impressive. It's not "CBS procedural" repetitive, but still fairly remarkable.

And yet legions of you people let AMC get away with it: you watch both the show and the back-slapping Talking Dead wankfest that follows it on Sunday nights; you stand in mile-long lines outside Hall H in San Diego during Comic-Con waiting for an upcoming season's 45-second sizzle reel; you gorge yourselves on redundant recaps and speculative blogs. Meanwhile, the average audience for Ash vs. Evil Dead barely outstripped the combined population of the Channel Islands.

Or maybe you're one of the so-called "hate watchers," who must mostly loathe yourselves, seeing as you're letting precious hours of your life dwindle away while watching the stalker from Love Actually struggle with his humanity, or something. Meanwhile, over on Starz you had Lucy Lawless (as Ruby, the author of the Necronomicon), reuniting with her old Xena co-star (Campbell played Autolycus), and Lee freaking Majors, the Six Million Dollar Man himself, as Ash's father.

There's no point making the case for Ash vs. Evil Dead now. After 37 years, four movies (the original was remade with significantly less humor in 2013), and a TV show, the franchise is likely done for good. Bloody Disgusting encouraged fans to petition Netflix to pick the show up, but Campbell announced shortly after that Ash was retiring. There is no Evil Dead without Ash, so it appears this really is the end.

For its part, AMC is talking plans for the tenth season (and beyond) of The Walking Dead, in spite of the (relative) decline in ratings. Have a good time with that.