The Art of Travel Isn't the Only Art At Houston's Airports 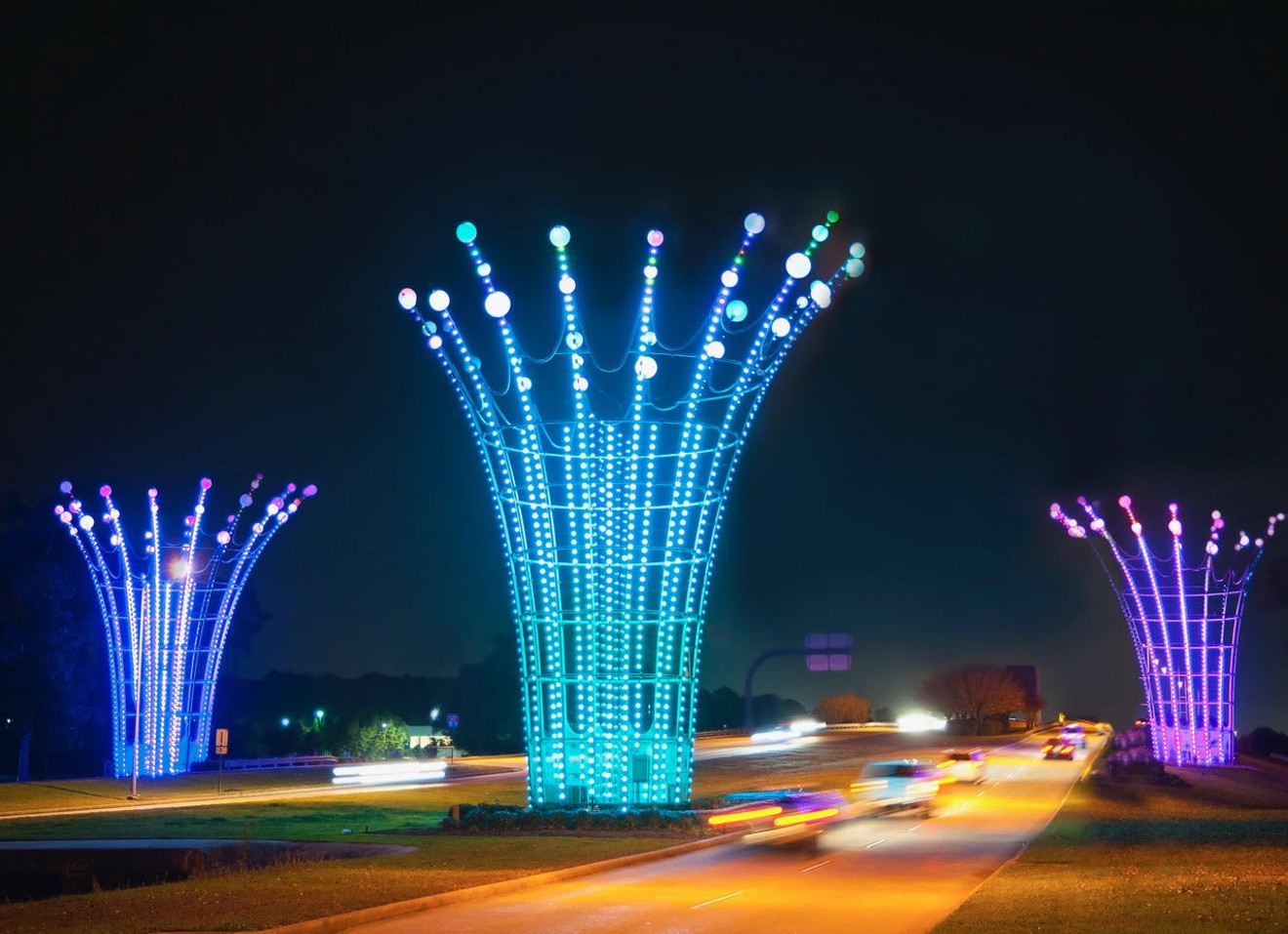 Radiant Fountains by Dennis Oppenheim Photo by Houston Airports
Houston’s airports are busy places with distractions galore – passengers rushing to make their flights, announcements blaring through speakers at every turn, a plethora of places to eat or drink, and shops with oodles things to buy.

There’s also art. Lots of it.

Huh, you might think. I didn’t know there was art at the airport. I’ve never seen it. Actually, you have, whether you realize it or not.

If you’ve driven down JFK Boulevard on the way into George Bush International Airport and seen the three huge stainless steel and LED light objects that look like water spraying. That’s Radiant Fountains, a sculpture by Dennis Oppenheim.

Look almost everywhere in either of Houston’s airports and there’s art to be found. About 350 works in total, varying in size comprising the largest public art collection in Texas. Jewelry, ceramics, painting, photography, textiles, sculpture, sound and light pieces, and large installation art, it’s all there. And presently it’s all overseen by one man:  Alton DuLaney, The Curator of Public Art for the Houston Airports.

“Some pieces at the airports date back to the '70s when there used to be a sporadic means of collecting,” says DuLaney. “We’d get donated a piece or someone would decide a wall needed some art, so someone would go and buy a painting.”

This all changed in 1999 when the City of Houston established a "percentage for art" program through a city ordinance that required all eligible vertical construction projects have 1.75 percent of their budget dedicated to art. Suddenly there was an ongoing revenue source for the airports to build a public art collection.

However, DuLaney is quick to point out that the money the airports use to buy art is not taxpayer money, but rather funds collected from passengers and airline fees.

Countree Music by Terry Allen
Photo by Houston Airports
One of the early works purchased was Terry Allen’s Countree Music located at Bush Airport’s Terminal A. The piece is a bronze cast of a 30-foot oak tree sprouting from a terrazzo floor depicting the map of the world (with Houston at its center as marked by the tree) and includes a sound element that serenades passengers as they walk by.

But is this money well spent? Well just imagine how sterile and unwelcoming the airports would be with nothing but institutional bare walls and spaces. And then picture what that would do to the moods of the many already tense passengers.

DuLaney lays it out more purposefully. Having art in the airport, he believes, is important to the airport/city the passengers, and the artists.

“A large percentage of our passengers are catching connecting flights and never leave the airport”, says DuLaney. “They spend a couple of hours and then fly off. Art showcases what the city of Houston has to offer, it reflects both the culture of the city and says that we are culturally aware and support our art community.

Art, he says, also provides a respite from the otherwise hectic travel experience. “It’s nice to offer a passenger time to slow down and contemplate a piece of art and spend some time with it before they go rushing to catch their flight.” Additionally, DuLaney points out that a lot of the traveling public might not go to galleries or museums, so this may be their only opportunity to see and appreciate art in person.

For the artists, it’s a huge win. Not only does the airport pay for the work, but being part of the permanent collection provides an unparalleled source of exposure. “In 2019 pre-pandemic, the Houston airport system served 60 million passengers for an average of 1 million people a week”, says DuLaney. “In comparison, The Museum of Fine Arts Houston, the largest art museum in the region, had just under 1 million visitors in a year. So, we provide exposure in one week what an artist would get in one year at the museum.”

DuLaney's belief in the importance of art was born long before he became curator for the airports three years ago. A fifth-generation Splendora, Texas native, DuLaney pursued an art career in New York, Los Angeles, and Europe before coming back to Houston via a full master's degree scholarship at the University of Houston  and a chance to work at the Blaffer Art Museum. There he worked with the museum's public art collection and ended up teaching a public art class at UH for a couple of years.

Once his studies were done, it just so happened that the previous airport curator was moving on, and so in 2019, DuLaney took on the job. "I came in at a really good time as the airport was just going into its international terminal expansion program so there were lots of opportunities,” says DuLaney.

Opportunities not just to purchase, but to strengthen the collection’s local roots. “My focus is on Texas artists”, says DuLaney. “Houston is such a diverse city that you can have a cosmopolitan art collection just by working with Houston artists alone.”

Alton DuLaney surveying the conservation of Randir Sahni and Jay Baker’s Light Spikes.
Photo by Houston Airports
While DuLaney is a team of one overseeing the entire program from curation to conservation, he is certainly not the only decision-maker when it comes to what art to purchase for the collection. In addition to working with the Mayor's Office of Cultural Affairs and Houston Art Alliance, DuLaney works with the Aviation Director, Mario Diaz, who often has a vision of what he'd like to see.

“So, he’ll say we’re building this area and we need art for the space”, says DuLaney. “Then we do a call for submissions which goes out to artists, galleries, and foundations. We ask for art in two categories portable works, meaning small objects like paintings drawing, and photos – art that can
be moved around. And site-specific works or commissions, art that becomes part of the architecture.”

Then a panel of experts, DuLaney being one of them, review and choose the work.

Finding and installing the portable work is relatively easy. Artists or galleries have these pieces readily available and their size is generally manageable. It’s the commissions that are complicated.

“All installations are required to have a structural engineer”, says DuLaney. “If a piece is going to be hanging from the ceiling we have to go back and find architectural drawings of the space engineered to make sure it’s sound and safe and not going to fall.” Not to mention, trying to install a large piece of art in a busy airport that runs 24/7 is an exercise in careful logistics.

As far as the logistics of the collection itself – that’s an ever-growing proposition. When asked if the airports were ever going to be full up with art, DuLaney gives an emphatic, never going to happen response. The airport he says will always be growing/changing, providing room for more art.

“We’re doing this new international terminal now and we’ll get about 30 years out of it before it’s renovated again as technology happens and travel habits change,” says DuLaney. “Terminal A is a 50-year-old building so there will be renovations on that. Hobby is expanding. There’s always another project. And then there’s Ellington Field, which right now houses private and some military flights but is designated to be Houston's spaceport for suborbital flights in the near future.”

Back to the present, DuLaney is working to make visitors more aware of the art by creating gallery spaces and developing a self-guided tour for passengers with time to kill between flights.

And while nothing beats seeing art in person, even if you’re not planning on flying any time soon, you can become more familiar with some of the pieces of the airport collections online by visiting fly2houston.com . There you’ll see pieces from both Hobby and George Bush airports along with a map of where the art pieces are located. It’s a good primer for art-spotting on your next airport visit.

Knowing that people will see the airport collections at some point is DuLaney's greatest pleasure. "One of the things I love most about my job is that generations from now there will be other people coming to the airport and appreciating the work I'm accomplishing now because this artwork will still be on display for them to enjoy."
KEEP THE HOUSTON PRESS FREE... Since we started the Houston Press, it has been defined as the free, independent voice of Houston, and we'd like to keep it that way. With local media under siege, it's more important than ever for us to rally support behind funding our local journalism. You can help by participating in our "I Support" program, allowing us to keep offering readers access to our incisive coverage of local news, food and culture with no paywalls.
Make a one-time donation today for as little as $1.