Bar Harbor, Maine is a real place, but the imaginary version where people go to escape their tragic pasts is far cooler. Photo by David Wilson via Flickr
It is a truth universally acknowledged that a woman in possession of a social media account must be in want of creepers asking, “u up?” Few people take this ubiquitous experience and turn it into a bizarre shared storyverse set in Bar Harbor, Maine, but Dixie Heaven-lee (real name, I swear) is one of them.

It all started on the Facebook page Let’s Not Date, where Heaven-lee shared screenshots of her interactions with men PMing her. Sick of constantly being asked for sexual answers, she told the men annoying her that her only true goal is to move to Bar Harbor, Maine, raise seven goats, and marry a lumber-selling man who will be the only one to understand her mysterious and tragic past.

Heaven-lee, who currently lives in Colorado Springs, Colorado, really, really committed to the bit in subsequent interactions with randos, updating her fantasy to pursuing the niche field of badger psychiatry once she finally made it to Bar Harbor. The story went slightly viral, with many other women deciding that they too wanted to tell people of their desire to start a new life in Bar Harbor. Eventually, it led to building an entire online community who began to add characters. 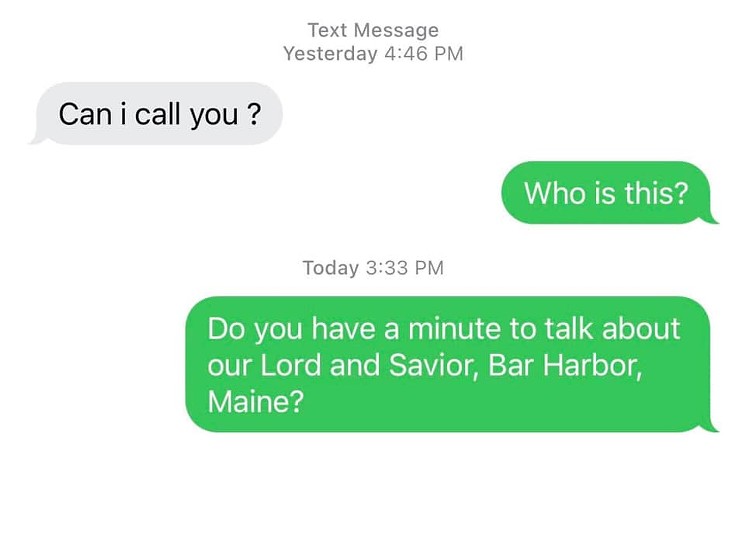 Blessed be the lumberjacks and the badger psychiatrists
Screengrab from Let's Not Date's Facebook page
“I’m extremely surprised, I thought it would get a few laughs but never expected it to expand into such an amazing little community,” says Heaven-lee. “It’s so beautiful to me, and I’ve grown so close with so many members of my Bar Harborverse. I’ve always wanted to move away to a small town, and I actually used a ‘small town generator’ to pick one for me. Bar Harbor was what it picked! The lumberjack was kind of a spur of the moment, I don’t think I’ve ever actually met one!”

I don’t get a lot of dudes in my inbox sending me unsolicited pictures of their self-esteem meters (this is not a complaint, by the way), but after a decade of covering internet Nazis and other unhinged human detritus I can certainly understand the desire to escape into fantasy. The Bar Harborverse intrigued the hell out of me as it seemed like a combination of Welcome to Night Vale and Lake Woebegone.

As luck would have it, a scammer messaged me the day after I discovered the Bar Harborverse and told me that he was a lottery winner who wanted to give me $25,000. Bored, depressed, and filled with goblinlike pettiness, I told him that as the dump owner and part-time crow witch of Bar Harbor, Maine I was well taken care of already, and he should instead send the money to the Trevor Project. The scammer tried to play along for a while, leading me to handwriting my official “town employee ID” on a piece of paper with a doddle of myself holding a crow. He eventually gave up once I told him that Bar Harbor had a law that we could only give and receive payment in two-dollar bills. I shared the screenshotted conversation with the group, and now Ol’ Jef is a Bar Harbor character! I couldn’t be happier for him.

“My favorite part by far is seeing people use the Bar Harbor storyline when random creeps message them,” says Heaven-lee. “I see them all over Facebook and it warms my heart so much.”

Not content to just be a minor internet phenomenon, Heaven-lee is now working on an official Bar Harbor novel based on the community contributions. The story is centered around a girl named Amelia and her son Lucas who move to Bar Harbor to run away from their past because Amelia tries to keep her son safe. They end up meeting tons of great people who live in Bar Harbor and are fully welcomed into the community. She’s come to love the crowdsourced, bizarre nature of the online world she’s built.

“I love it! It makes writing the book so much easier because once I have permission, I can use those characters in my book!” she says. “Makes it so much fun to not have to come up with them myself and it feels great to include everyone who’s involved in my Bar Harbor journey.”

It’s good to see something positive to come out of the constant, unending parade of unwanted gross interactions on the internet.
KEEP THE HOUSTON PRESS FREE... Since we started the Houston Press, it has been defined as the free, independent voice of Houston, and we'd like to keep it that way. With local media under siege, it's more important than ever for us to rally support behind funding our local journalism. You can help by participating in our "I Support" program, allowing us to keep offering readers access to our incisive coverage of local news, food and culture with no paywalls.
Make a one-time donation today for as little as $1.