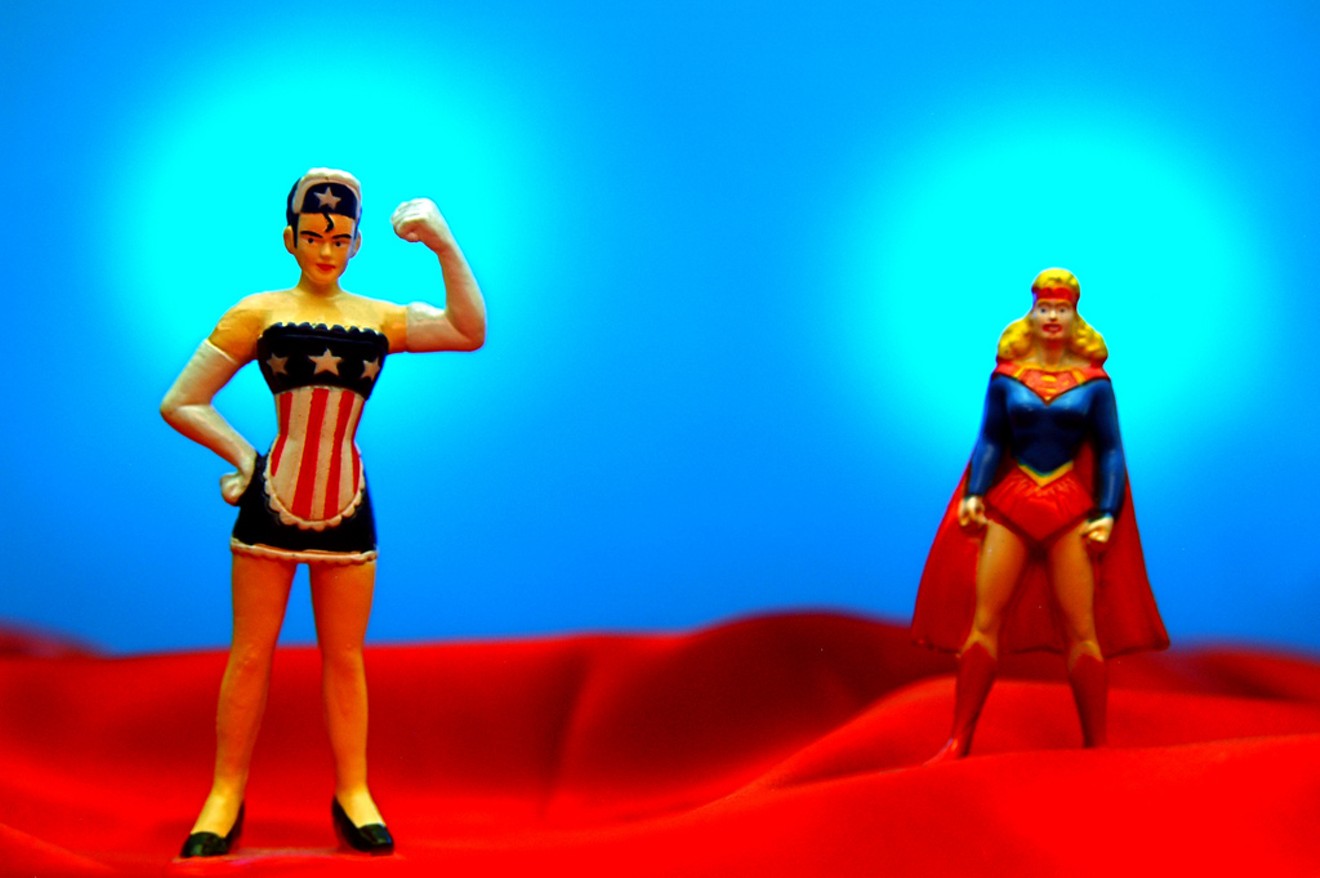 American Maid vs. Supergirl. Photo by JD Hancock via Flickr
I recently wrote a piece called “Teach Your Daughters to Hit People Who Touch Them.” You can read it if you like – and thanks for reading if you do – but really, the title says it all. Inappropriate touching is sexual assault, not enough people in authority take it seriously, and I believe fear of immediate reprisal is a powerful social tool. I believe women are taught from the time they are girls that it is their place to diffuse and talk and counsel their way out of situations, and that men take advantage of that to, well, get away with whatever they can.

There are several things that I should have mentioned that I didn’t. First, I didn’t say that the voice is as powerful as the fist in many cases, and when you’re punching your assailant in the face you need to be screaming “STOP TOUCHING ME!” as loud as you can. Second, run. Always run. Hit first, then run. I can’t stress this enough. Run.

Also, several people emailed me to make sure I understood that fighting back was an automatic suspension in many schools. Make of that what you will.

Mostly, response to the piece was pretty positive, but there was one bit that kept coming up again and again that irked me. It was a constant refrain about the physical differences between men and women and how that affected the power dynamic. It’s the sort of thing that makes up the bulk of those “Why I’m Not a Feminist” pieces written by young women that the Odyssey keeps publishing over and over and over again. Man strong. Woman not strong. Woman no carry man-weight in war.

So, today I want to talk to you about a woman I call my sister, and who was the best man at my wedding. These days she publishes books under her married name of Jennifer Courtney, but when I met her running around Rocky Horror in a four-screen off Almeda she was Jenny Schlein. Jenny is 5’2”, and probably the only time she’s consistently weighed in the triple digits was when she was pregnant. I have had piles of laundry bigger than her. Even when she would put on her Sinister Sirens get up to play bass she looked more like a pixie going through a goth phase than anything terribly intimidating.

Odds are Jenny can kick your ass whatever your gender.

Jenny and I went into Lucha Libre together out in East Houston, learning our craft on thin mattresses stacked in Jabio Flores’ driveway. Jaibo himself was rather diminutive and quite the character. He’d rambled all throughout Mexico, performing in places where the fans stab you when you beat their local champion. Our education included all the standard wrestling aspects of stage combat and how to fall, but also covered dirty fighting as only a man who considers getting stabbed a typical part of his job can teach. Jenny may not have been able to gorilla press most the luchadores we trained and performed with (and neither could I), but there was nothing wrong with her fireman’s carry, suplexes, or armbars.

But that’s wrasslin’, right? Not a real fight. How would she fare in actual combat? I’m so glad you asked.

The other thing that we got really into was MMA. Not so much UFC, but the good stuff from Japan like Pride and K-1. I was more interested in it strictly from a spectator perspective, but Jenny decided she’d take herself out and learn Brazilian Jiu-Jitsu. I don’t remember how high she ranked in the discipline, but I do know that she got good enough to participate in local MMA events.

We used to play a little game. She and I would go down to the Houston Arboretum, find a secluded spot, and my job was to be her untrained attacker. I would try to hit her, grab her, throw her to the ground with my average fight skills, and she would try to stop me. In retrospect THIS WAS A TERRIBLE PLAN. The possibility that someone could have stumbled across us and thought I was actually trying to hurt her was very real, and I could have caught some boots for it. Or worse. Not that Jenny needed the help. I never beat her. Ever. Not even with my superior man-size.

Did I mention she’s a veteran? She went on to serve as a MP in the army, which is where she met her husband. Uncle Sam apparently didn’t believe this “women can’t fight” nonsense.

I’ll be the first to admit Jenny is a fairly atypical woman, but the reason she’s atypical is because we don’t tell little girls to act this way. When she and I were getting into wrestling and MMA you couldn’t walk down the street without running into some dude in a UFC shirt, but Jenny was usually the only woman in any given fight gathering as a participant.

It’s precisely this attitude, that women responding violently in their own defense is unwise or unlikely to work, that made me write my piece in the first place. Learning to fight and being ready to unleash that knowledge should be standard issue for both genders. It should be something we just expect, like someone being able to change a tire or prepare a basic meal. Trust me, if getting punched was more common, a lot fewer people would have seen Louis C.K.’s dick against their will.

Whether we do it consciously or not, we condition women to think that fighting back physically is not a tool in the toolbox. I can’t really see any benevolent reason for that attitude. I more suspect it has to do with tipping the odds in sexual assailant’s favor. Because if there is one thing I learned from Jenny, it’s that the line between men and women in terms of fighting is all a matter of training and willingness. Anyone who tells women something different does not have their best interests at heart.