The German American Bund held parades in which U.S. and Nazi flags were marched side by side, like in this one from October 30, 1939 on the streets of New York City. New York World-Telegram and the Sun Newspaper Photograph Collection: Library of Congress/Courtesy of Thomas Dunne Books
Hitler’s American Friends: The Third Reich’s Supporters in the United States
By Bradley W. Hart
304 pp.
$28.99
Thomas Dunne Books

It was a nice summer picnic in 1937 with a lot of the trappings you might find at any gathering with hundreds of families, food and drink, patriotic speakers, and energetic bands. But look a little closer and you would see this picnic was festooned with scores of Nazi flags and banners, marching men in brown shirts, and frequent cries of “Heil Hitler!” 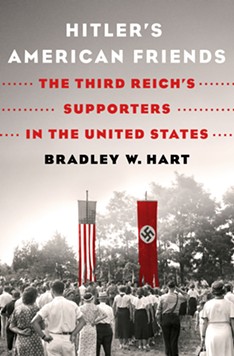 Book cover
Look even closer and you’d see the United States Stars and Stripes flying next to the Swastika. And even further examination would reveal that the location of this picnic was not Berlin, Germany, but Long Island, New York. And on this Fourth of July, pro-German politics and unabashed support of the Third Reich was on the menu along with hot dogs and potato chips.

While most of us learn in history class that seemingly all of America was united against the Nazis during World War II, we were actually late to the dance. It took the bombing of Pearl Harbor in 1941 to truly sway American minds and military forces. But in the years prior while Hitler was rampaging across Europe, a sizable portion of the U.S. population was either pro-German, or of that mind that America certainly did not need to enter an overseas conflict – albeit one that was creeping closer to these shores.

In this surprising, well-researched, and easy-to-digest book, Hart lays out how Americans from all stations in life were working out front or behind the scenes with their actions (or at least sympathies) for the Nazi regime. And hoping to advance their cause and goals in this country.

Two groups at the forefront were the German American Bund (made up mainly of German Americans with a political end) and the Silver Shirt Legion (who dressed just as their name indicates and came from a more religious standpoint). Each was led by a self-styled leader who aimed to become an American Führer – Fritz Kuhn and William Dudley Pelley respectively. But were brought down by controversies, including when Pelley proposed a “Secretary of Jewry” who would oversee all U.S. Jews moved to live in one location. 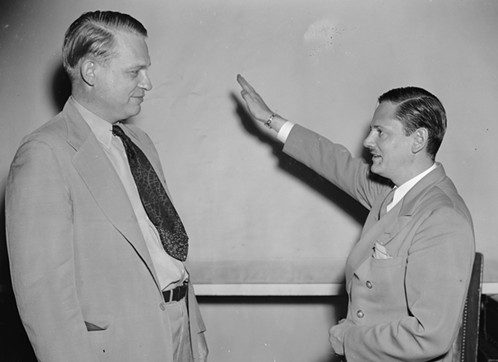 U.S. House Rep. from Texas Martin Dies meets with former journalist John C. Metcalfe (right). Metcalfe infiltrated the Bund and testified to what he experienced in front of a Congressional committee. Here he shows Dies the Nazi salute on August 12, 1938.
Harris & Ewing Collection: Library of Congress/Courtesy of Thomas Dunne Books
Hart details other groups – students, businessmen, German ex-pats, and spies who worked to further German interests in America. Though it has to be said that many of their designs were rooted in the desire to keep the U.S. out of the war and anti-FDR/New Deal positions rather than anything to do with pro-Nazi or anti-Jewish sentiment.

“Hitler’s government was not seeking aid from the United States,” he writes. “The entire goal of Nazi propaganda was to encouraged apathy and confusion by sowing discord, discrediting the British, and turning Americans against one another…the Germans were hoping to dissuade the United States government from any action at all.”

But the one man who weaves most in and out of several chapters is Charles Lindbergh. Arguably one of the most famous men in the world at the time, he won the respect of many for his aviation feats and the sympathy of more after the kidnapping and murder of his son.

But after he became enamored of the Third Reich and the leadership of Adolf Hitler in the mid-1930’s, he began to pepper his increasing number of written editorials and speeches with anti-Semitism, finally falling in with the America First Committee. He was the headline speaker at a 1941 rally hosted by the organization New York’s Madison Square Garden. The venue was filled to capacity with 22,000 attendees and another 10,000 outside the listening on loud speakers. 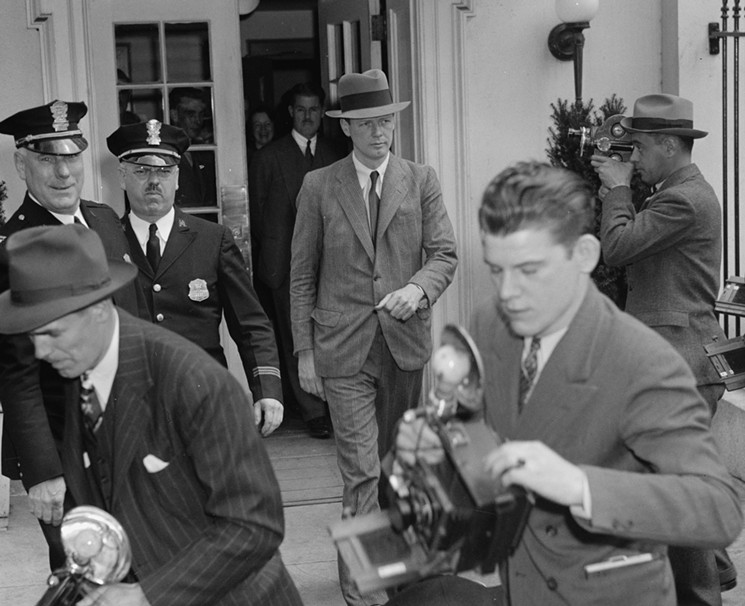 Famed aviator Charles Lindbergh (in hat), put himself in the middle of the debate over intervention in the war. His trips to Germany and involvement with the America First Committee would make him one of Hitler's key American "friends." He's seen here leaving the White House after a tense meeting with President Roosevelt on April 20, 1940.
Harris & Ewing Collection: Library of Congress/Courtesy of Thomas Dunne Books
And while his belief was always harbored (he said) in American isolationism, he was also the recipient in 1936 of the Service Cross of the Order of the German Eagle (Nazi Germany’s highest civilian award) given to him by Hermann Göring at the request of Hitler himself, a person who Lindbergh called “a man of character and vision.”

The event – in which the audience booed any mention of President Roosevelt’s name – was not without its comic moments. It was decided that the assembled should not sing the song “God Bless America” because it was seen as “too interventionist.” Escaping completely the fact that it was written by a Jew, Irving Berlin.

Undoubtedly, Hart’s text will have many readers making some comparisons to today’s political climate, be it a charismatic celebrity-turned-political leader who espouses a hardline “America First” agenda, or a slew of people facing charges for skirting the FARA Act, which requires those working for foreign governments to declare their intentions. It’s the same law being used to prosecute former Trump associates like Paul Manafort and Michael Flynn, as well as the NRA-loving Russian gun girl, Maria Butina.

And while it’s far too far a stretch by any means to make too many comparisons at this point between events and attitudes of 1938 and 2018, Hart’s book nevertheless comes off as both a historical tale and a cautionary one as well.
KEEP THE HOUSTON PRESS FREE... Since we started the Houston Press, it has been defined as the free, independent voice of Houston, and we'd like to keep it that way. With local media under siege, it's more important than ever for us to rally support behind funding our local journalism. You can help by participating in our "I Support" program, allowing us to keep offering readers access to our incisive coverage of local news, food and culture with no paywalls.
Make a one-time donation today for as little as $1.