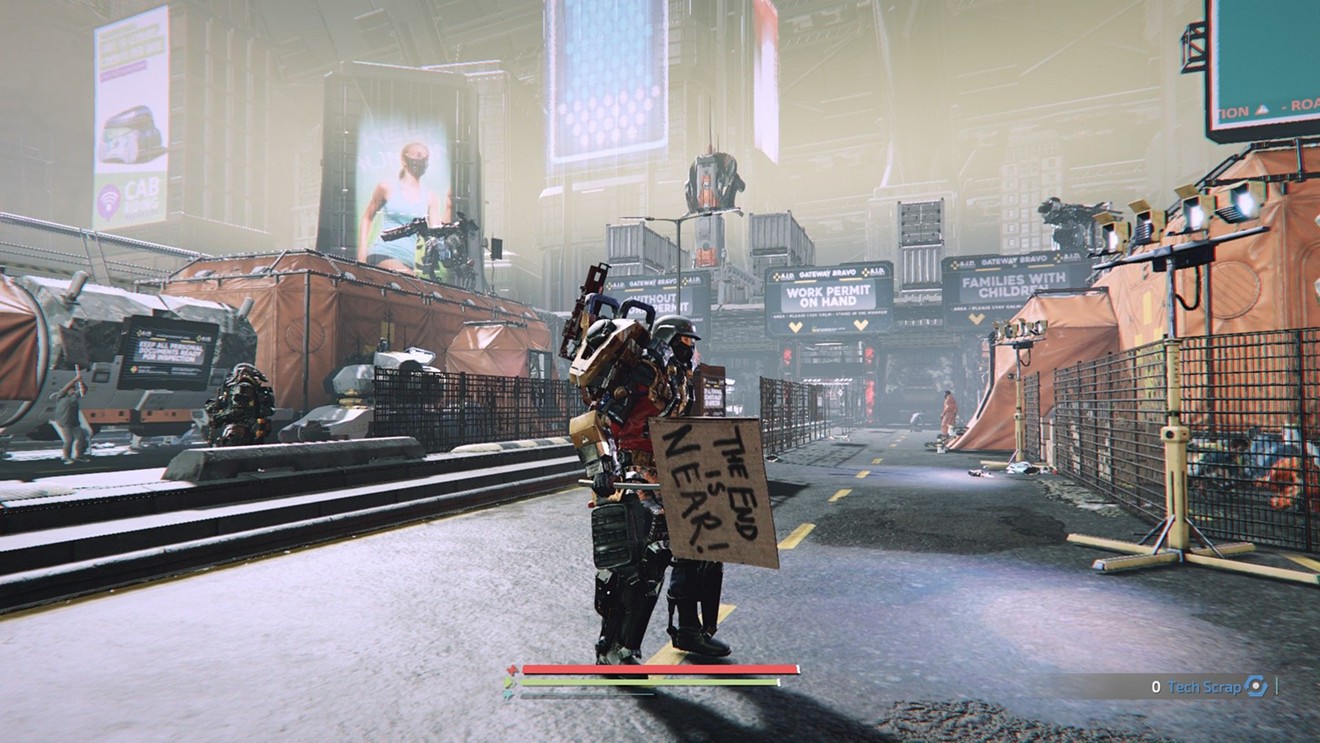 You can acquire a "The End is Near" sign as a gag weapon. Screengrab from The Surge 2
Spoilers ahead for The Surge and its sequel.

The Surge 2 improves on the original in many ways, but its new storyline loses its predecessor’s razor-sharp critique of corporate greed and cruelty as well as one of the very, very few disabled protagonists available in video games.

Let’s start with the latter because it actually leads directly to the former. The Surge is a Dark Souls-esque title set in the near future as opposed to a fantasy realm. The hero is Warren, who would be a pretty generic white male protagonist except for two things. One: he’s cheerful and generally kind. In a medium filled to the brim with grizzled men with tragic pasts looking for righteous violence, Warren is surprisingly easy-going and considerate. The few times he comes across as a dick are motivated by the understandable stress of waking up in a factory full of cyborg monsters trying to kill him.

Two: he’s paraplegic. In a brilliant scene at the beginning, we meet him as he rides a train to his new job at CREO, but once we’re given control it turns out that he’s in a wheelchair. After fighting through the game courtesy of the exo-rig, the last shot is of him once again crawling toward his wheelchair.

I'm not sure why the only good video I could find of this scene is in German.

I’ve pointed out before how there are almost no playable disabled protagonists in video games, though there is a really good recent example of Cassie Thornton from Perception. How you count Warren is somewhat debatable. On the one hand he is kind of the walking (pun intended) avatar of the Disability Superpower trope because the exo-rig lets him move without the wheelchair and even makes him a gifted warrior. That pretty much negates the fact that he is disabled from a practical sense. As David Christopher Bell once said, “There’s blind, and then there’s Daredevil blind.” So what makes Warren better than, say, Rad Spencer from Bionic Commando with his super-powered prosthesis?

It’s that being disabled is still integral to the plot of The Surge. It’s revealed through the course of the game that CREO is working on a nano machine swarm that is supposed to save the human race from the effects of climate change. Being a greedy, uncaring corporation, they need both test subjects and expendable workers because coming into contact with hazardous materials is going to kill or maim people. Lawsuits wreck the bottom line.

To compensate, CREO begins recruiting the disabled, particularly those without families. This is overtly spelled out in audio logs throughout the game. The company wants desperate people who can’t find work otherwise and who are seen as drains on the diminishing resources of the planet, and it wants them without family ties because when they get hurt or killed no one will come looking for them. Warren is the last of these job seekers, and he crawls into the automated surgical grafting machine right as the titular surge hits, leading to widespread malfunction and his cyberization without anesthesia. When the first chapter starts after the prologue, he is literally being hauled away to be dissected for scraps.

The Surge isn’t a perfect game, but it definitely has a message that it is not shy about. It says the disabled are being preyed upon for profit (which is true right here in America) and that corporations lack the conscience to solve the world’s problems because the profit margin is more important than the survival of the species.

Literally all of that is thrown out of the window in The Surge 2. For instance, the exo-rigs are apparently now a widespread consumer product requiring no surgery instead of mobility assistant devices for a near-enslaved workforce. The first game made it clear that the exo-rigs were first made for the disabled (see video above) then later developed for military, law enforcement, and security personnel. The majority of enemies and NPCs are assumed to be other people like Warren who showed up because of the commercials advertising the ability to walk again. Certainly none of the CREO upper management you encounter are wearing them. They only have neural implants. Maybe the exo-rigs made it into mainstream society the way sock sliders and EZ crackers did, but if that's true it just highlights the erasure of the disabled rather than commenting on it.

In The Surge 2, the streets are filled with hostile ex-rig wearers, and there’s never really a reason given as to why beyond that it’s what happens in dystopias. Why does a random cult have all this military gear? How are all these scavengers equipped with specialty medical machinery? None of them ever give a hint that they, too, are disabled or otherwise weakened from the dying world. Why are exo-rig med bays everywhere? The game never answers because all it cares about is having people in exo-rigs for you to chop up. Like the infomercial products I mentioned, its origin and importance to the disabled is lost.

We meet Warren again as a quest-giver, but he’s just another guy walking around in an exo-rig. The emotional ending where he defeats the Rogue Process but also depowers his mobility device is completely ignored. Instead, he’s just another cyber-warrior in the dystopia, no different in any major way than anyone else. His disabled status is never mentioned. It's equality by way of expungement,

Even though Warren and a few others will talk about CREO and how they started the nano swarm that is part of the main plot of The Surge 2, most of their evil is pretty much ignored. Their actions are treated like more of an oopsie than the logical result of late-stage capitalism without regulation. All the exo-rig technology that people are using is CREO’s and no one seems bothered by that at all. It’s as ubiquitous as cars on the road.

Instead of the anti-capitalist message, we get a very bland condemnation of religion and government. The main enemies in the game are a pseudo Christian-cult and a brutal, corrupt military force. Whereas the entire corporate culture of CREO was baked into the first game smoothly, these factions are kind of just tacked on. The origins of the Children of the Spark religion and their overall motivations are only vaguely alluded to. They are simply the Evil Religion™ of the day.

The A.I.D. military force isn’t any better. At one point we come across this hospital where they were kidnapping kids and experimenting on them with the nanites to see if they could create a perfect weapon. It’s horrifying but again, we never get told who this weapon is even for. What threat is so awful it turns average soldiers into kidnappers? Like the Children of the Spark, their ideology is just a contextless-evil, a placeholder for a more nuanced villain who never appears. It’s the Bioshock Infinite problem. In a bid to offend no one they dilute their own message to the point of irrelevancy and cover it with style.

That’s such a letdown from the first game, which proudly wore its point on its sleeve. It said, “you can’t privatize saving the world because entities that exist only for profit will exhibit no conscience while developing the cure they wish to sell you at the highest possible price.” In CREO, even people’s bodies don’t belong to them. The enemies are driven mad with the artificial intelligence running through the CREO system and every person you meet is a victim of their predatory practices in some way. In The Surge 2, the streets of Jericho are simply filled with enhanced bastards who kill because life is brutal. It makes doing all the side quests really strange because the game gives very little reason to guess that kindness is valued. I think it’s telling that one of the first side quests you can finish actually ends up with the person who gave it to you trying to butcher you for meat.

The Surge may be just a Souls-clone with a sci-fi edge, but it’s so beautifully dedicated to its values. The sequel by contrast, is a cobbled together chimera of other games. It borrows its graffiti mechanic, impossibly high mechano-minimalist final dungeon, and contemplation of a machine’s possible soul as humanity’s bequest from The Talos Principle. It has its own version of Sofia Lamb from Bioshock 2, complete with a grotesque minion in a test tube who the player has the option to euthanize. There’s a fake secret ending that’s really a game over like in Batman: Arkham City, and it shares that games ridiculous giant wall as well.

It feels like in the rush to make The Surge 2 bigger and better and longer they lost focus until all that was left was a collection of stylized tropes that are all edge and no point. The hero is a player creation, and you can’t even make them paraplegic like Warren was so the game actually loses some representation despite adding gender, age, and race options. The result is still a hell of a game that is well-worth your time, but what it gains in better play it loses completely in its unremarkable, completely forgettable presentation.
KEEP THE HOUSTON PRESS FREE... Since we started the Houston Press, it has been defined as the free, independent voice of Houston, and we'd like to keep it that way. With local media under siege, it's more important than ever for us to rally support behind funding our local journalism. You can help by participating in our "I Support" program, allowing us to keep offering readers access to our incisive coverage of local news, food and culture with no paywalls.
Make a one-time donation today for as little as $1.