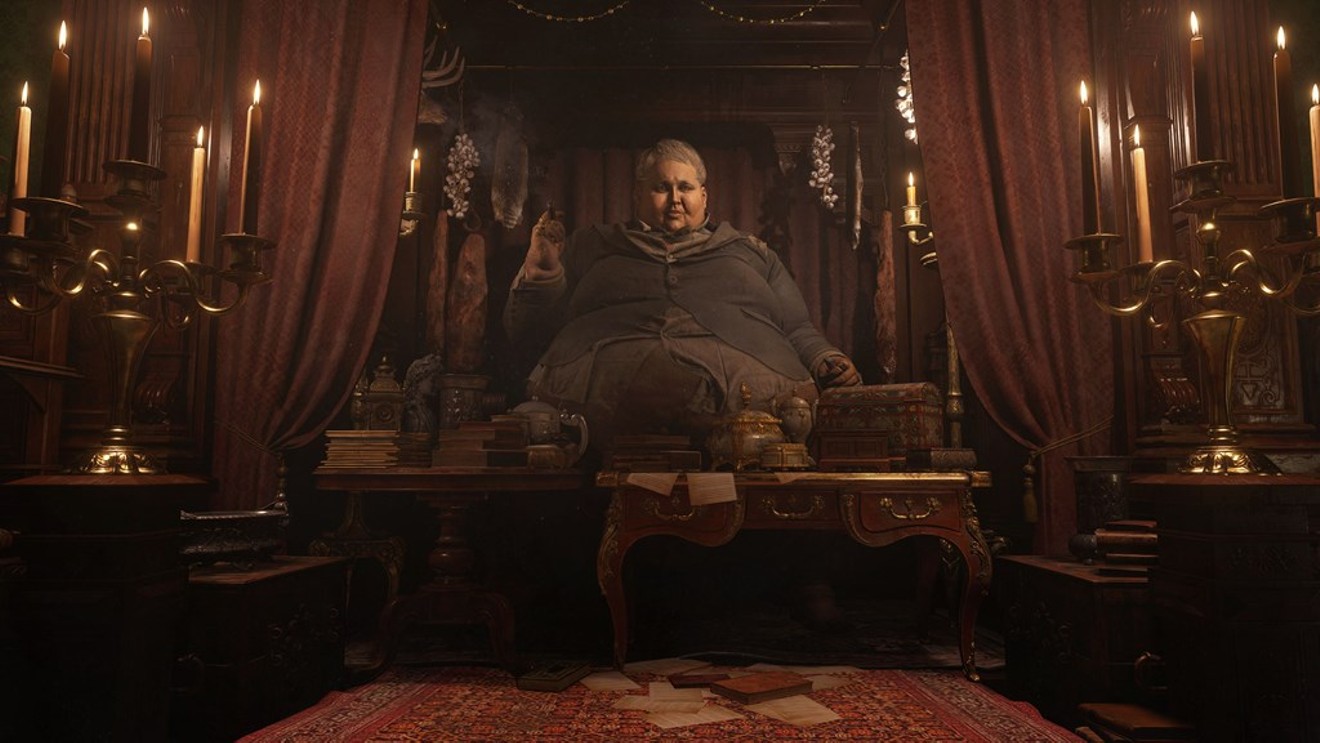 This man will not be explained and the game mocks you for expecting him to be. Screenshot from Resident Evil: Village
For the record, I think Resident Evil: Village is utterly brilliant. It’s terrifying, fun to play, and certainly breathing new life into a franchise that has been limping along on nostalgia for a decade. The thing is, when a game is really, really good, it actually makes the flaws even harder to ignore. So, here are the things that annoyed me the most in my favorite game of 2021 so far.

Village actually does some incredible things with its mid-boss fights, from the puzzle-based encounters with the Dimitrescu Daughters to the full-level reservoir battle against the fish monster version of Moreau. The problem is that all of these clever conflicts eventually degenerate into generic brawls with massive bullet sponges that require little beyond a command of strafing and a quick trigger finger. Heisenberg’s fight at least becomes more memorable by giving you control of a… chainsaw tank? Am I remembering that right?

Even then, it’s uninspired and not much fun. Personally, I think it would have been neat if after you drain the reservoir fighting Moreau, he just flopped on the ground uselessly while you put a bullet in him similar to the shark tank scene from the original Resident Evil. It would have been a far more dynamic end than “oh look, a big bag of mutated flesh that needs a grenade launcher.”

I am of the opinion that you can firmly paint the line between Generation X and Millennials by asking if Resident Evil 4 is the best game in the series. One of the reasons I don’t care for Resident Evil 4 is because I don’t like the merchant feature that debuted in that game. Village brings it back with The Duke, a massive and mysterious figure that sells you gadgets and upgrades your weapons even though it makes exactly zero sense that he is everywhere you need him. The game tries to wave this away by having protagonist Ethan ask about Duke’s origins, only for Duke to basically say it’s a long story he doesn’t even know all of himself.

Look, Capcom, if you don’t want to give us a lore reason why something is there, just don’t bring it up. Coyly telling the audience that they don’t get to know why something is happening makes you look like a dick who is covering bad writing with snark.

Resident Evil has always gotten by on tropey protagonists that work despite basically being caricatures, but Ethan is still maybe the weakest of them all. He spent the last game barely reacting to having his limbs sliced off every five minutes or even taking an axe to his wife. Here, after 20 hours, he finally gets some basic characterization, but even then, most of his emotional journey happens in the final couple of hours. The heartbreaking ending of the game is good, but it still felt weirdly unearned by a shallow player cipher who probably has less than ten minutes of dialogue across two games. I get that not every first-person hero can be Booker DeWitt or Garrett from Thief, but right up until the finale Ethan often felt like he was less-engaged in the story than I was.

It took me hours to realize that the game really doesn’t have storage boxes like virtually every other Resident Evil does, which led me with no way to know what to do with my ever-expanding arsenal. The game is really bad about letting you know that if you sell a gun to Duke, such as the less-powerful pistol, it will be available to re-purchase if you want it again. That led to some needless anxiety for me as I found myself full of guns with no room for bullets and throwing away precious resources so I could pick up a sniper rifle. Frankly, making you sell artillery for space is kind of a cheap shot anyway, although it is nice to have the option to do it. Regardless, the game should really let you know that sold guns aren’t gone forever.

Village takes about ten hours to complete, and that is all that it needs to take. In fact, I’d say the game is about an hour too long. After beating Moreau, Ethan has to go on this sidequest fighting lycans in a decrepit fort before the final lord, Heisenberg, will let him into his factory. The fortress level feels completely tacked on, has little identity, and is really uninspired by the standards of the rest of the game. The final level, Heisenberg’s factory, brings the quality back up, but it also has some frankly bullshit padding. After slowly climbing your way out of the basement inch by inch, it makes you return all the way to the bottom to pick up another item before you finish. To be fair, the game uses this trek to kill the lights and make you tackle more difficult and horrifying enemies, but there’s no getting around the fact that it just made you do the same area twice to increase the playtime. I hated every minute of wandering around lost in the dark traying to navigate the map of places I’ve already been. Backtracking for extra loot is always a fun option but forcing a player to do it as part of the main campaign is a cheap trick.

Don’t get me wrong, these are all minor complaints compared to how great playing Village is. You shouldn’t let any of these criticisms stop you but be ready for some missteps.
KEEP THE HOUSTON PRESS FREE... Since we started the Houston Press, it has been defined as the free, independent voice of Houston, and we'd like to keep it that way. With local media under siege, it's more important than ever for us to rally support behind funding our local journalism. You can help by participating in our "I Support" program, allowing us to keep offering readers access to our incisive coverage of local news, food and culture with no paywalls.
Make a one-time donation today for as little as $1.