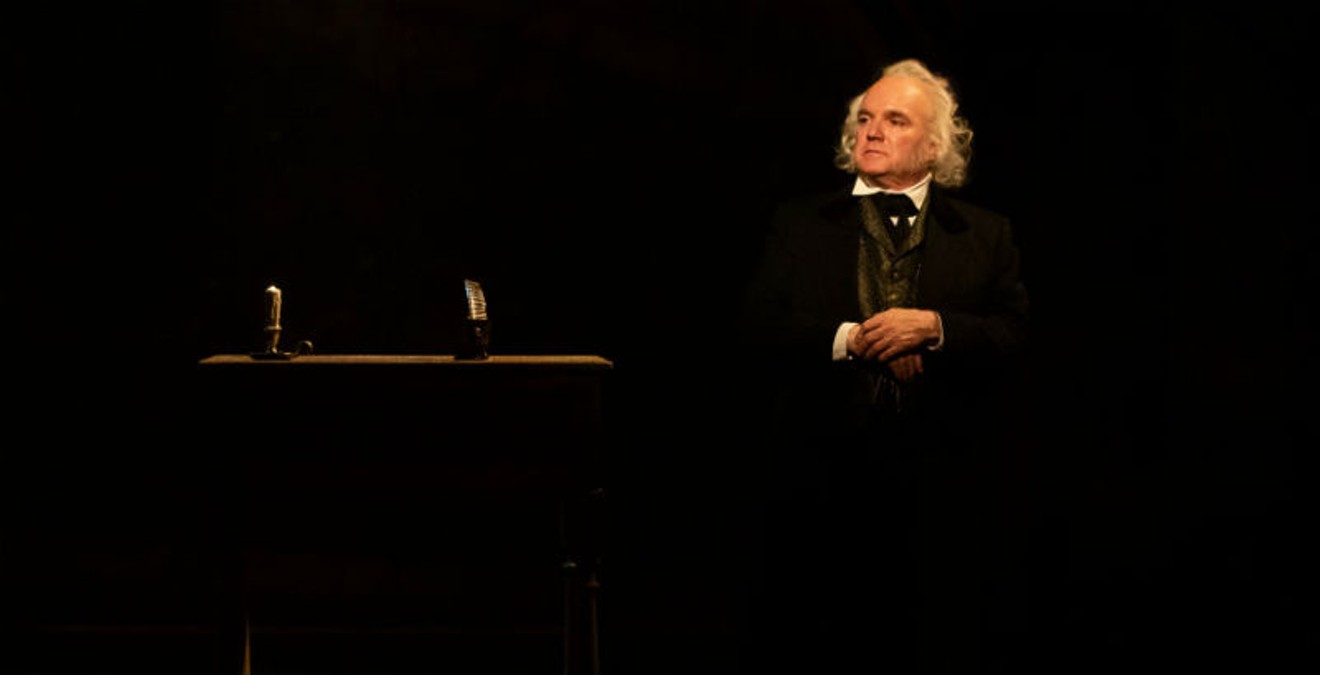 Sure as the sun comes up in the morning, A Christmas Carol will be showing at the Alley Theatre over the winter holiday season. Photo by Lynn Lane

Taking advantage of the suspense that's part of so many successful plays, the Alley Theatre with a nod (whether intended or not) to Jeri Ryan who played the Borg drone Seven of Nine in Star Trek: Voyager, today released its "Five (of Eleven) Productions for the 2019-20 season.

An Agatha Christie play is back as is the Michael Wilson Version of A Christmas Carol. This season's Shakespeare play will be The Winter's Tale — done less often than many of his other plays. It will be interesting to see how it compares to the production by 4th Wall Theatre Co. in 2014.

Filling out the partial dance card will be Vietgone , a story of two Vietnamese refugees in America, and Fully Committed, a one-man show about a Manhattan reservation booker.

Here are descriptions provided by the Alley as well as comments from the new Artistic Director Rob Melrose.

Since its publication in 1934, this plot-twist masterpiece has thrilled mystery lovers from television, radio, and film. And now we have the chance to experience this lush mystery live onstage. PlaywrightKen Ludwig (The Three Musketeers) adapts the classic thriller that features renowned detective Hercule Poirot and a cast of characters sure to have everyone in the audience guessing just who did it.

Rob Melrose: I'm excited to direct this fast-moving adaptation of Agatha Christie's most famous novel. It is a beautiful story with larger than life characters and it finds the famous Hercule Poirot at a particularly crucial turning point in his life. This adaptation premiered at the McCarter Theatre Center and was written for a proscenium stage. I'm already hard at work with my design team doing back flips to make our production take advantage of the Alley's glorious thrust stage. I'm working with the same team who designed my Frankenstein at the Guthrie Theater (a team I've been working with for 20 years) and I'm excited to be working with the Alley's Resident Acting Company for the first time on this show. It is also great to be learning everything I can about the wonderful Agatha Christie. I think she is going to be a big part of my life for a long time to come!

The Winter's Tale by William Shakespeare

This whimsical tale of romance, tragedy, and comedy will take center stage in familiar places for Alley audiences. This play is a sweeping story of wrath and redemption and of lost and then found love. The Resident Acting Company will join together to tell Shakespeare’s beloved fable of hard-won joy and the promise of renewal.

Rob Melrose: This is Shakespeare's magical late romance about healing and redemption. It features some of Shakespeare's most beautiful language as well as his boldest experiments with verse and rhythm, not to mention the greatest stage direction of all time: "Exit pursued by a bear." I'm setting this play in Texas! Our Sicilia will be modern, sophisticated, high-rise Houston and our Bohemia will be the rural West Texas of myth and dreams. The play will be dream-like in that our production will quite literally be a Winter's Tale told by a young Houstonian boy: Mamillius. The play will be from a child's perspective and will feature the child-like story-telling fantasy that comes with telling this magical tale.

Set in 1975 after the fall of Saigon, two Vietnamese refugees discover a deep love for each other and their new American home. It’s a contemporary twist on the boy meets girl story, infused with playwright Qui Nguyen’s infectious and irreverent style. The play is not only a laugh-out-loud riot, it’s an immensely moving story about searching for home.

Rob Melrose: I've been a huge fan of this play since I saw the world premiere at the Oregon Shakespeare Festival. It is the story of how the playwright's parents met as refuges (in Houston!) from the Vietnam War. Nguyen's play puts us firmly in the perspective of the young Vietnamese lovers. The play is also full of rap music and lots of comedy. I'm also excited to bring Desdemona Chiang's work to the Alley. Desdemona has been having success in major theaters all over the country but we know each other from our early days as young up-and-coming directors in the Bay Area.

A Christmas Carol - A Ghost Story of Christmas byMichael Wilson

A Christmas Carol - A Ghost Story of Christmas is a family-friendly re-telling of Charles Dickens’ classic story, which follows Ebenezer Scrooge’s journey with the three ghostly spirits who visit him on Christmas Eve.A Christmas Carol instills a powerful message about redemption and the spirit of the holiday season. Suitable for ages 6 and up.

Rob Melrose: James Black is the best Scrooge I've ever seen play the role and I'm thrilled to have him back with the Alley resident acting company in this beloved production.

Hilarious, one-man, 40-character show about the trials of a Manhattan reservation booker eager to get home for the holidays.

Rob Melrose: We are excited to bring back Fully Committed in its recently updated form after its Broadway run with Jesse Tyler Ferguson. I'm excited to have Brandon Weinbrenner back at the Alley as a director as he creates this one-person tour de force production.