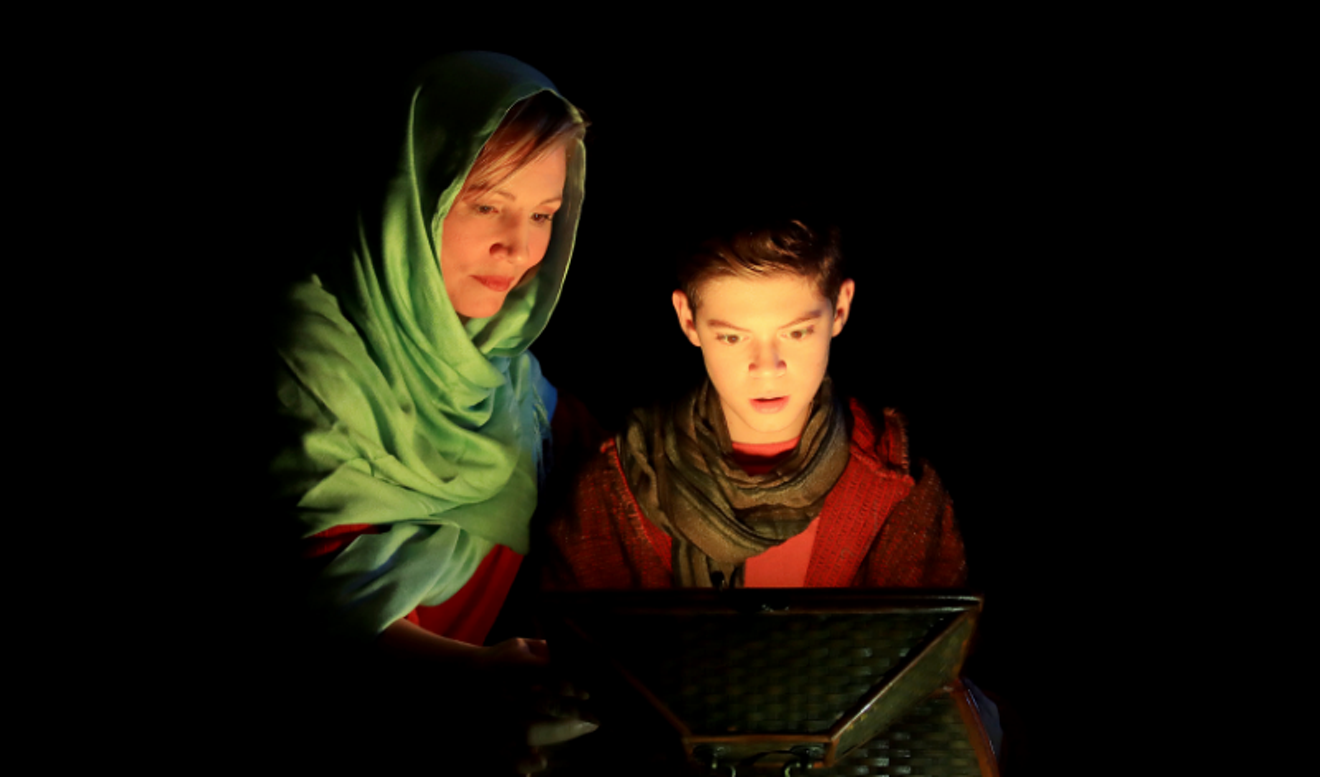 Jan Cornelius as Mother and Michael Karash as Amahl. Photo by Pin Lim
Amahl is a young disabled boy who lives with his mother, a widow, and can only walk with the help of a crutch. The pair live in desperate poverty near Bethlehem and his mother is worried about Amahl's future. She wants him to grow up to be something other than a beggar.

As the story begins, the audience meets Amahl and learns he is fond of telling stories. Therefore, his mother doesn't believe him when he tells her three kings are standing at their front door. But they are — to the great amazement of Amahl, his mother and the neighbors.

The kings, magi on their way to see the Christ child, ask for lodging for the night and during that night, Amahl's mother is caught trying to steal some of their gold.

Amahl and the Night Visitors, the one-act opera by Gian Carlo Menotti originally commissioned because NBC wanted to put an opera on TV, has become a classic since its beginning in 1951. Opera in the Heights is about to unveil its production of the holiday favorite, starring Michael Karash as the boy.

Karash is a veteran of several Theatre Under the Stars productions (Ragtime, Jerome Robbins' Broadway, Beauty and the Beast) and was recently nominated to perform at the 2019 Broadway Dreams NYC Showcase. "I started learning music when I was 6 with piano lessons and then when I was 7 I started doing theater in community theater. And then about a year later I joined the Theatre Under the Stars academy for the performing arts."

In his TUTS shows he has been able to demonstrate his singing, dancing and acting talents. Despite all this, he says he'll probably be an engineer when he grows up. "It would be great to be a Broadway star but I do love math and science and I love being creative and designing stuff so yes I probably will be an engineer and maybe do acting on the side. But I don't know. Stuff happens."

He's able to fit his performing career around his classes at McMeans Junior High in Katy ISD, although catching up with homework is sometimes hard, he said. But all that has taught him to be very organized, he says.

Describing his character, Karash says: "Amahl is a really mysterious boy and he wants to help and protect his mother. But also he acts as any boy his age so it's really inspirational."

Karash comes by his artistic talents honestly. His father, Ilya Karash,  plays the violin and piano. His parents are semi-professional ballroom dancers. His mother Inna  (she uses her maiden name Shaposhnikova in the ice skating world —  is a professional figure skater who is now a figure skating coach and just had one of her students make it to the U.S. Nationals.

"This is way different from anything I've done because mostly I've done musical theater," Karash says. "I just saw the first opera in my life a couple of weeks ago [Rigoletto]. Now I'm very excited to be in an opera."

And he encourages families to come to Amahl and bring their children along.

Most kids have probably not experienced seeing an opera these days. I think seeing a story with a young boy as the main character that they can relate to is a great way to get them introduced to classical opera and maybe they can see more opera and more theater in general."

Performances are scheduled for December 7-15 at 5 p.m. Saturdays and 2 p.m. Sundays at Lambert Hall, 1703 Heights Boulevard. Performed in English with English surtitles. For information, call 713-861-6303 or visit operaintheheights.org. $24.50-$84.50.
KEEP THE HOUSTON PRESS FREE... Since we started the Houston Press, it has been defined as the free, independent voice of Houston, and we'd like to keep it that way. With local media under siege, it's more important than ever for us to rally support behind funding our local journalism. You can help by participating in our "I Support" program, allowing us to keep offering readers access to our incisive coverage of local news, food and culture with no paywalls.
Make a one-time donation today for as little as $1.