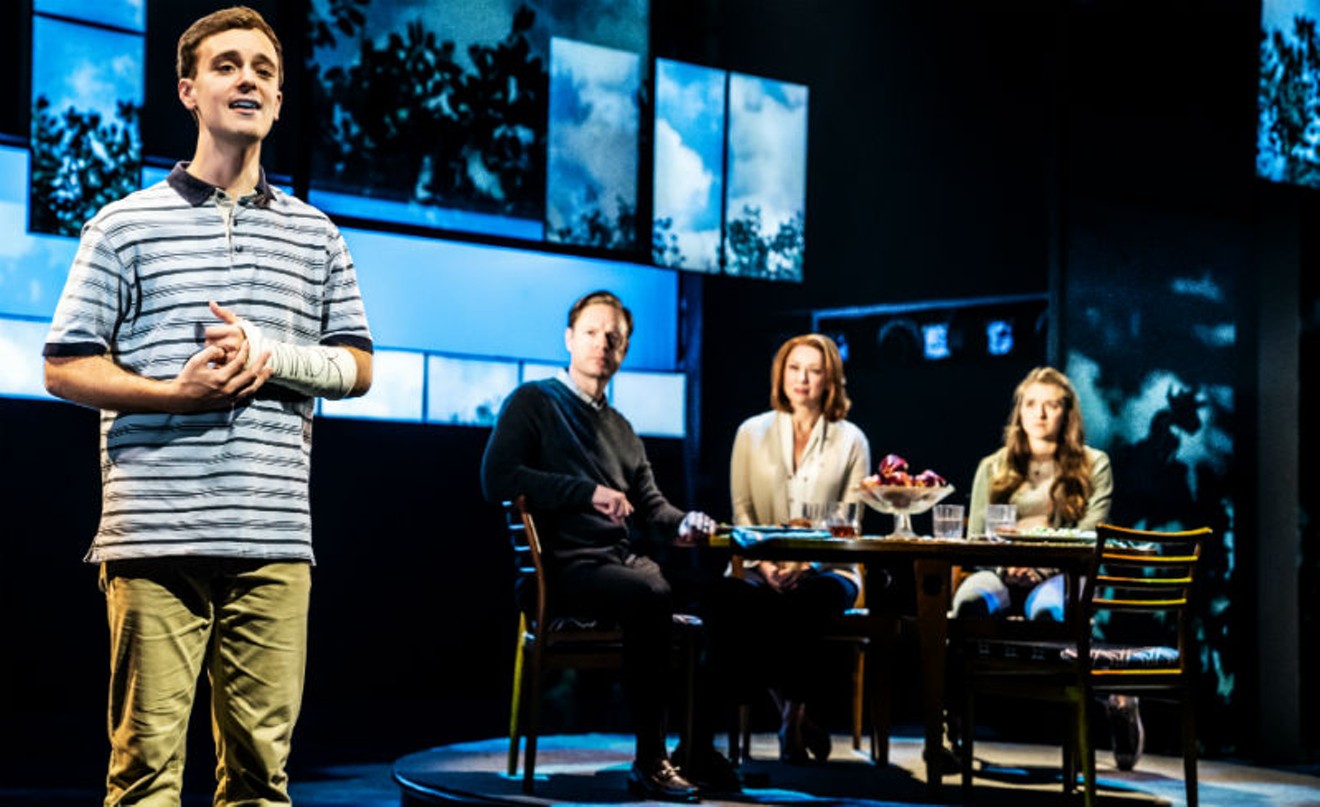 Stephen Christopher Anthony as Evan Hansen and the Broadway touring company of Dear Evan Hansen. Photo by Matthew Murphy
Surviving the high school years is tough enough for many kids, but for those with social anxiety it can be four years of pure hell. Evan Hansen wants to ditch his aloneness and connect with others. He seizes on an opportunity to pretend he was friends with a fellow student who has committed suicide and is embraced by the dead boy's family.

And the lies just continue to pile on.

In the Tony Award®-winning musical Dear Evan Hansen beginning this week in Houston courtesy of Memorial Hermann Broadway at the Hobby, actor John Hemphill (Broadway: School of Rock, Mamma Mia!), plays Larry Murphy, the father of Connor who took his own life. He and his son had a contentious relationship.

"He’s a guy who tried his best to raise his family and raise his son as best he knew how," Hemphill says. "I think Larry Murphy has limitations in his ability to understand the challenges that young people face. And I think he had it in his mind that he was to raise his son in probably the way he was raised and guess what, that doesn’t work for everyone.

"He wanted to be able to go out and play catch with his son. He wanted to be able to talk to his son about baseball and sports and inspire his son the way he was inspired. And that just did not happen at all for him due to the challenges that Connor faced and I don't think Larry was ready for that," Hemphill says. "I wouldn't say he's a bad guy but I would say that he had his own challenges that created conflict between he and his son. Larry had his own limitations.  And he may have given up on his son and I think that’s tragic. And I think that causes him to face his demons and his guilt by the end of Act I."

With Evan, Murphy gets a second chance. "I think everyone in this play gets a second chance. Evan comes around and he’s interested; he's interested in baseball. He actually says 'Yes, I would like to share that time with you' and that is thrilling for Larry Murphy.  I think he gets a bit of redemption, but it's more than that, it’s cathartic for him to be able to share this with Evan."

At the beginning of the play Larry Murphy and his wife are having challenges. They had different views on how to raise Connor and a lot of conflict comes from the failure on both parts of their parenting choices, Hemphill says. "We kind of give up on ourselves a little bit."

Further complicating matters is that Evan has had a crush on Zoe Murphy, Connor's sister, who has her own problems with her parents. "I think that she has been forgotten in many ways as well. She has had to deal with Connor being the center of attention for her entire life. She kind of got lost in the shuffle," Hemphill says.

Despite the sad points, potential audience members should know the script is often very funny, Hemphill says. "I implore people to stay; the second act is fantastic. I always tell people yes, there will be tears as you invest yourself in these characters, but you will enjoy yourselves.

"As actors, it’s not always the case that we get to work on material that has more beyond entertainment value, that has a message, that does some good. I had the honor to work on The Curious Incident of the Dog in the Night-Time and that also had content that spoke to a portion of our population that might be underrepresented. Knowing that the message of this musical was one of hope and a message to speak to young people who might feel alone and not heard it’s such an important thing for them to know that they are heard and that they do have someone out there who can listen to them."

Performances are scheduled for November 12-24 at 7:30 p.m. Tuesdays through Thursdays and Sundays, 8 p.m. Friday and Saturdays and 2 p.m. Saturdays and Sunday at the Hobby Center, 800 Bagby. For information, call 713-315-2525 or visit thehobbycenter.org or broadwayatthehobbycenter.com.  $55-$125  With a special digital ticket lottery available for a limited number of $25 tickets each performance, The lottery begins accepting entries 48 hours before the first performance.
KEEP THE HOUSTON PRESS FREE... Since we started the Houston Press, it has been defined as the free, independent voice of Houston, and we'd like to keep it that way. With local media under siege, it's more important than ever for us to rally support behind funding our local journalism. You can help by participating in our "I Support" program, allowing us to keep offering readers access to our incisive coverage of local news, food and culture with no paywalls.
Make a one-time donation today for as little as $1.