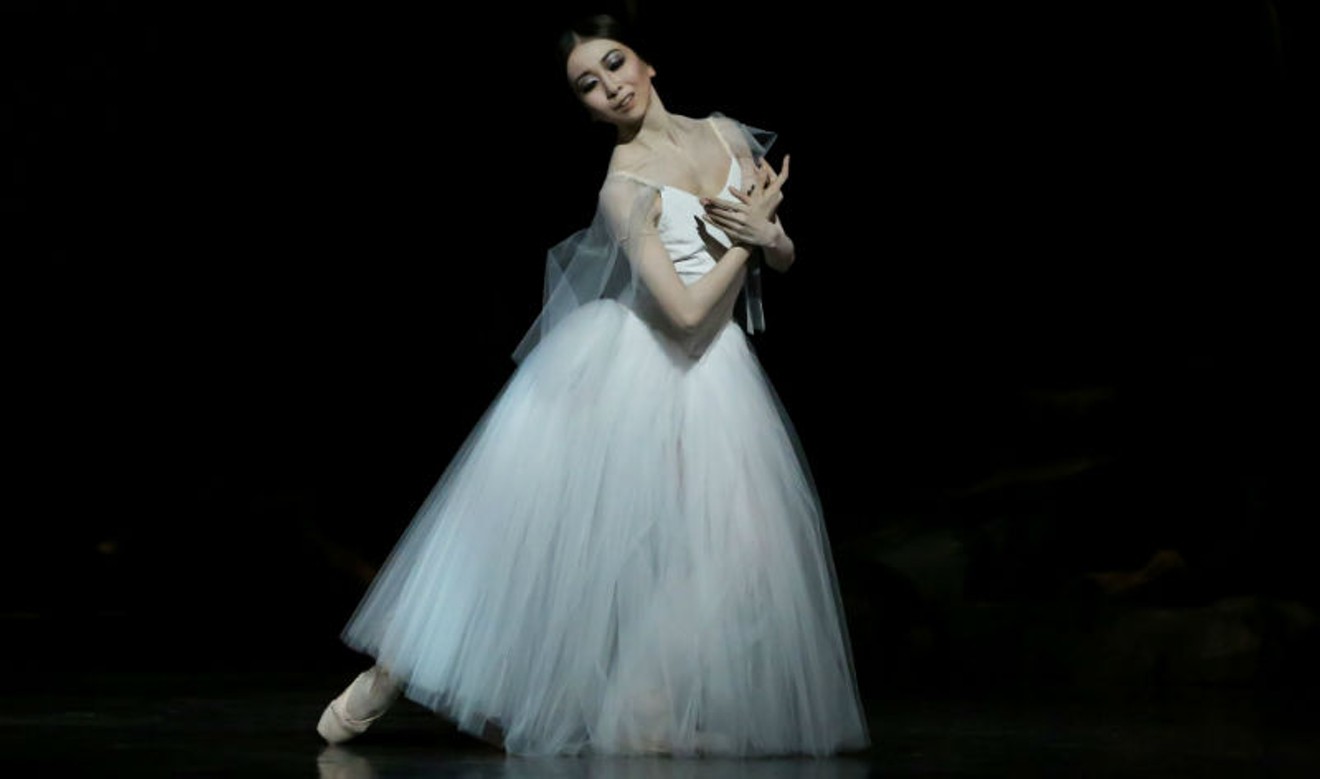 In Giselle, dance is beautiful, haunting and physically punishing. Giselle, in modern versions, distraught at finding out the man she loves is a fraud, dances herself to death. Another man who loves her is driven by supernatural spirits to dance himself to exhaustion and death over a cliff. And only one man, Duke Albrecht the unfaithful lover, is spared from the same ultimate fate because of Giselle's love.

As a kickoff to its 50th anniversary season, Houston Ballet has once again paired Principals Yuriko Kajiya and Connor Walsh in Artistic Director Stanton Welch's choreography for the classic ballet; she playing Giselle and he the Duke who disguises himself as a commoner. Alas, not only is he not a member of the peasants' ranks but he is already betrothed to another woman.

It is a romantic ballet hitting all the great sweeping notes of great love, great betrayal, faithfulness and redemption. It's a role that Kajiya welcomes performing again. "Everything about this ballet is so magical," she says. "It's a love story, especially in Act I, In the second act you get to play something completely different and that's very challenging and pretty rewarding."

"In the last two years since we performed this ballet we both have grown as a dancer and a person so when you come back to it even though you’re the same person but you're different so you find more things and your   dancing is more mature. It's just really wonderful to come back and finding different things," Kajiya says.

The ballet is also well known for the Wilis, a sort of supernatural death corps of women comprised of virgin girls who died before being married and now make it their mission to dance men to death.  After her death, Giselle could have become one of them, but instead forgives Albrecht and saves his life.

As a child in Japan, Kajiya wasn't all that captivated by ballet, she says. It was just one of her activities, something she did once a week. When she was ten, her father who regularly traveled aback and forth to Shanghai for business, suggested that she attend the National Ballet school there for a couple months. They weren't pushing her into ballet; her parents just thought it would be a good experience.

"I stayed there for six years," she says - a stint far more due to her determination rather than love of ballet or taking the ballet world by storm. In fact her mother came at one point to bring her home and she said no, she wanted to stay. "At that time I didn’t like it but I felt I started something and had to finish," she says now. She found out much later that her mother cried during the airplane ride back to Japan.

Three years into it, Kajiya's age group started entering competitions and ballet began to mean a lot more to her, she says with the more intense coaching sessions that accompanied preparations. "I really liked the fact that as much effort as you put into it you could get rewarded. I started to become a bun head."

At this point in her life, Kajiya says, she can't imagine herself without ballet. She often returns to Japan where she teaches and performs. "I do a lot of workshops and master classes."

Giselle continues to draw audiences because people can relate to its themes, she says. "The story is so raw,and I think that is why it touches so many people. And the beautiful music," she says. It's also a wonderful ballet for someone who haven't seen a professional ballet performed before, as well as those who want to be caught up in Welsh's version which has expanded the ballet to include extra music.

"One of my favorite parts is the mad scene. The mad scene is actually twice or maybe three times longer than usual and I love playing that part. I can really feel every single emotion that Giselle might be going through."

Performances are scheduled for September 6-15 at 7 p.m. Friday September 6, 7:30 p.m. Saturdays and Friday September 13, 1:30 p.m. Saturday September 14 and 2 p.m. Saturdays September 8 and 15 at the Wortham Theater Center, 500 Texas. For information, call 713-227-2787 or visit houstonballet.org. $25-$200.
KEEP THE HOUSTON PRESS FREE... Since we started the Houston Press, it has been defined as the free, independent voice of Houston, and we'd like to keep it that way. With local media under siege, it's more important than ever for us to rally support behind funding our local journalism. You can help by participating in our "I Support" program, allowing us to keep offering readers access to our incisive coverage of local news, food and culture with no paywalls.
Make a one-time donation today for as little as $1.