In Miss Saigon No One Escapes Unscathed By War 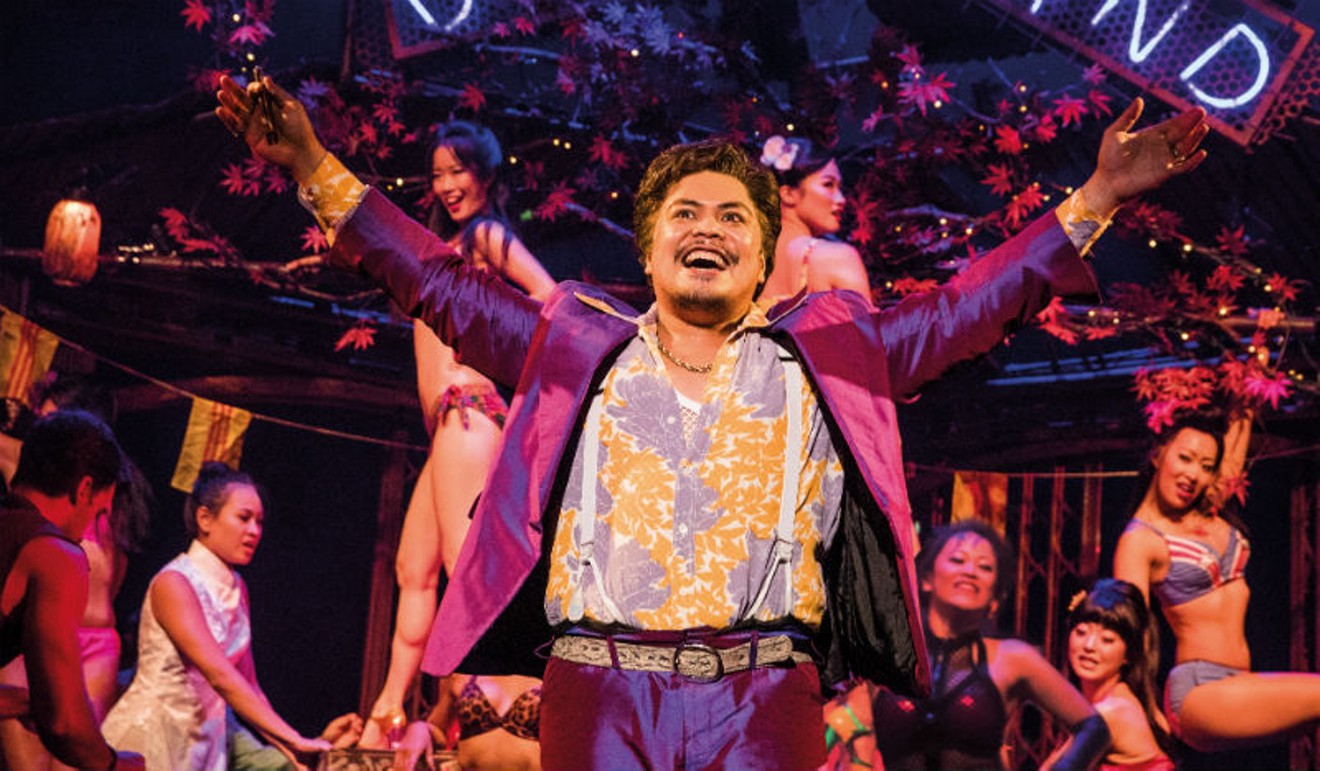 Red Concepcion as The Engineer in Miss Saigon. Photo by Matthew Murphy
A young bar girl in Vietnam during the historic war there meets an American GI. They fall in love but are eventually driven apart when Saigon falls to North Vietnam.She has his child and waits faithfully for his return. When he does, it's with an American wife.

Miss Saigon, a more modern retelling of Madame Butterfly (now on stage at Lambert Hall in an Opera in the Heights production reworked in Japanese and English), has returned to Houston for a short run courtesy of Broadway at the Hobby.

The story, set in a time of turmoil, has all the sadness and pathos of Puccini's opera and boasts compelling music all its own. As musicals go, it has not been without controversy first because of casting a white actor, Jonathan Pryrce as the French-Vietnamese hustler The Engineer in the original London and Broadway productions (1989 and 1991) and second because some critics feel the show is racist, sexist and offensive to Asian-Americans. Despite this, the show has continued to thrive — albeit with different casting decisions — and has been one of the most performed in modern musical theater.

Red Concepcion plays The Engineer in this touring production coming to the Hobby Center. He played the role on the UK tour for a year and a half. .At that point he got a call asking him to do the U.S. tour where he's been for about six months now.  Despite his character's less than reputable reputation, Concepcion says he enjoys playing him.

"First of all he’s got some beautiful numbers. The music in this show is fantastic. It's some of the best music in the show. There's a lot of layers to him. He’s charming but he’s also manipulative and deceitful. He just basically wants to survive and he’s going to do anything to survive and come out on top," Concepcion says.

There are a couple challenges to playing The Engineer, Concepcion readily volunteers. There's the balancing act of playing someone that the audience needs to feel some sympathy for despite his less redeemable qualities. "He’s a very unsavory person but like he’s also got some very questionable methods but still the audience still has to kind of like him." That's especially important given that he's a character who speaks directly to the audience.

The other challenge is the extreme physicality of his role, Concepcion says. "When he's on stage he’s always doing a million things. He’s got a lot of balls up in the air," he says. "When you’ve got a role as big as this in musical  theater you do have to keep up the stamina, keep up the endurance. it can eat you alive because the music is so big and the numbers are so big."

Concepcion grew up as the child of parents who were both musical theater actors in the Philippines, he says.  "My grandmother was a music teacher so the house was full of music. As a kid apart from cartoons, they would show us these old movie musicals. So as a kid I always wanted to be Gene Kelly and Fred Astaire."

Despite all this musical influence, his parents did not want him to go into musical theater as a career, Concepcion says. "They wanted to protect us. It's a hard life. But me and my siblings were very very stubborn." He got a scholarship from the Philippines Department of Science to study science in college and was set to do that,he says. But, then he heard about auditions to study musical theater in Singapore. "I got that as well so I was like 'Mom, you can't say anything.'' I decided to do that instead."

Asked why he thinks Miss Saigon has enjoyed so much success, Concepcion says: "Because at the very heart of it it’s a very human story. It's about how love helps you endure hard times, basically propels people to do incredible things. The strength of the human spirit is portrayed very beautifully in the show and I think that's what people latch onto.

"It’s a good reminder of what war can do to people and what kind of people are produced by war. The Engineer is one such character and the war changes people. None of the characters in the show come out unscathed. But it's also a good reminder of how the strength of a woman's love, a mother's love, shines through all that darkness."

Performances are scheduled for May 7-12 at 7:30 p.m. Tuesday through Thursday and Sunday , 8 p.m. Friday and Saturday and 2 p.m. Saturday and Sunday at the Hobby Center, 800 Bagby. For information, call 713-315-2525 or visit thehobbycenter.or or broadwayatthe hobbycenter.com. $48-$361.
KEEP THE HOUSTON PRESS FREE... Since we started the Houston Press, it has been defined as the free, independent voice of Houston, and we'd like to keep it that way. With local media under siege, it's more important than ever for us to rally support behind funding our local journalism. You can help by participating in our "I Support" program, allowing us to keep offering readers access to our incisive coverage of local news, food and culture with no paywalls.
Make a one-time donation today for as little as $1.