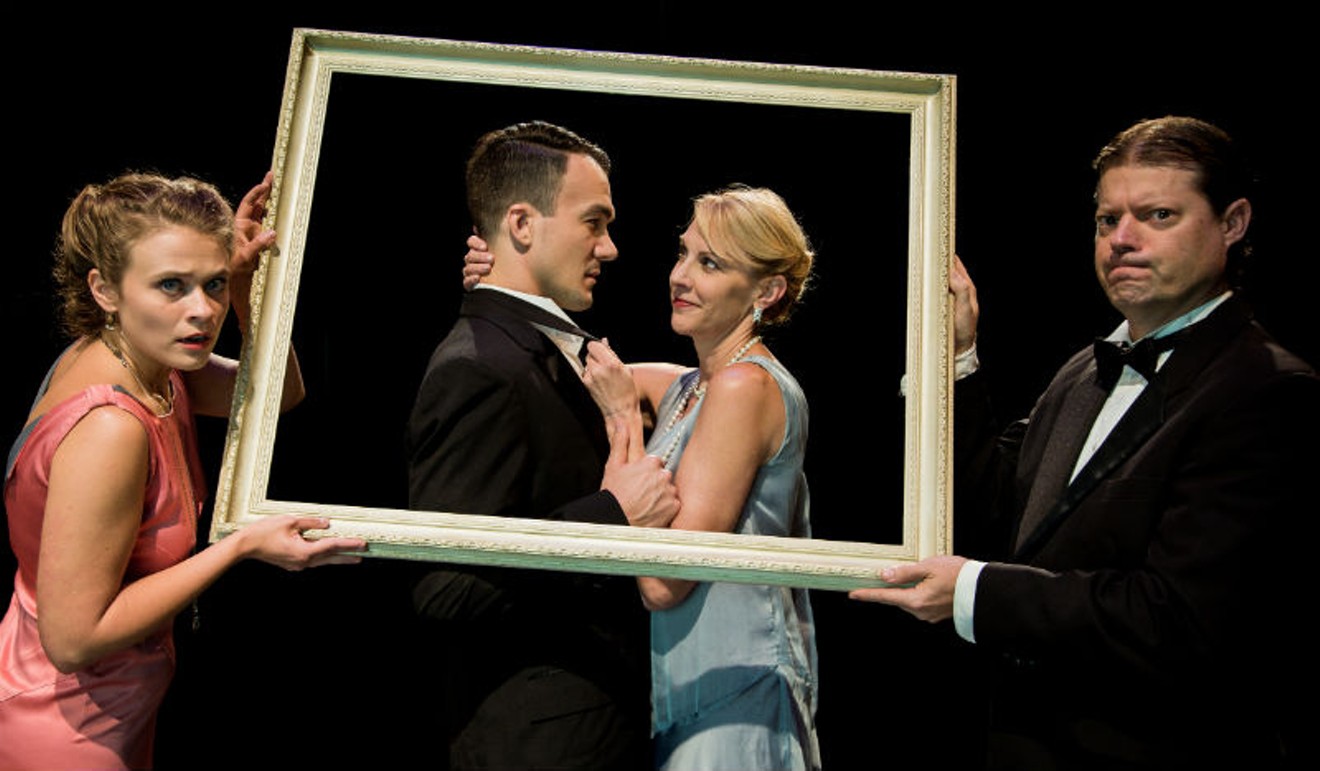 In Private Lives, two couples on their honeymoons discover they are staying in adjoining rooms at the same hotel as their former spouses. Elyot, who used to be married to Amanda is on his honeymoon with his new wife, Sibyl. Amanda, now married to Victor initially wants nothing to do with her former husband, in fact both she and Elyot beg their new spouses to leave the hotel immediately but are unsuccessful in their arguments.

In this comedy of manners by Noel Coward, the foibles of human relationships are fully exposed. Forced into close quarters, Victor and Sibyl rediscover what they ever liked about each other and end up fleeing the scene and their new spouses, decamping to Amanda's apartment in Paris.

Where they resume their once familiar routine of fighting with each other all the time.

Elizabeth Marshall Black plays Amanda in the Main Street Theater production of the romantic comedy/farce. She's done this play before, but several years ago in San Antonio and that time she played the Sibyl role.

"It’s interesting to just play a different character in a show that I’ve done before and it's obviously just this iconic farce romantic comedy. I feel super privileged to have a change to now play Amanda."

She describes her character this way: "Amanda is a force of nature and very much her own person. I think it’s so interesting Coward’s approach with her was very progressive. — the perception of a woman’s place and how people may pigeonhole just based on gender. And she doesn’t accept that. Which is great. Which I just love. She gives as good as she gets."

Director Claire Hart-Palumbo has set it in 1929  which is the year Coward wrote it. "So right before the crash and before this world as people knew it right before all of that collapsed." There are five people in the cast with a special appearance by Main Street Artistic Direct Rebecca Greene Udden.

Private Lives continues to draw in audiences, Black says, because "It’s hilarious. It’s a really well written, well constructed comedy and his turn of phrase is so great. It’s still so true just the emotions it connects to. It holds up because it's just so true and it's really, really funny."

Black says there are certain lines that have stayed in her head all these years. "There’s a bit at the end that I just remember verbatim."

"I think Main Street is known for the love of the word." Black says/ "The brilliance of the script, the word play. The pace, it’s very quick and you have to keep up. I think that will appeal not only to regular patrons but anyone who really likes comedies.

"There’s [also] the farce side to it so there’s a lot of physical comedy which just adds to it so you get the best of both worlds."

Performances are scheduled for July 20 through August 11 at 7:30 p.m. Thursdays through Saturdays and 3 p.m. Sundays at Main Street Theater-Rice Village, 2540 Times Boulevard. For information call 713-524-6706 or visit mainstreettheater.com. $38-$48.
KEEP THE HOUSTON PRESS FREE... Since we started the Houston Press, it has been defined as the free, independent voice of Houston, and we'd like to keep it that way. With local media under siege, it's more important than ever for us to rally support behind funding our local journalism. You can help by participating in our "I Support" program, allowing us to keep offering readers access to our incisive coverage of local news, food and culture with no paywalls.
Make a one-time donation today for as little as $1.