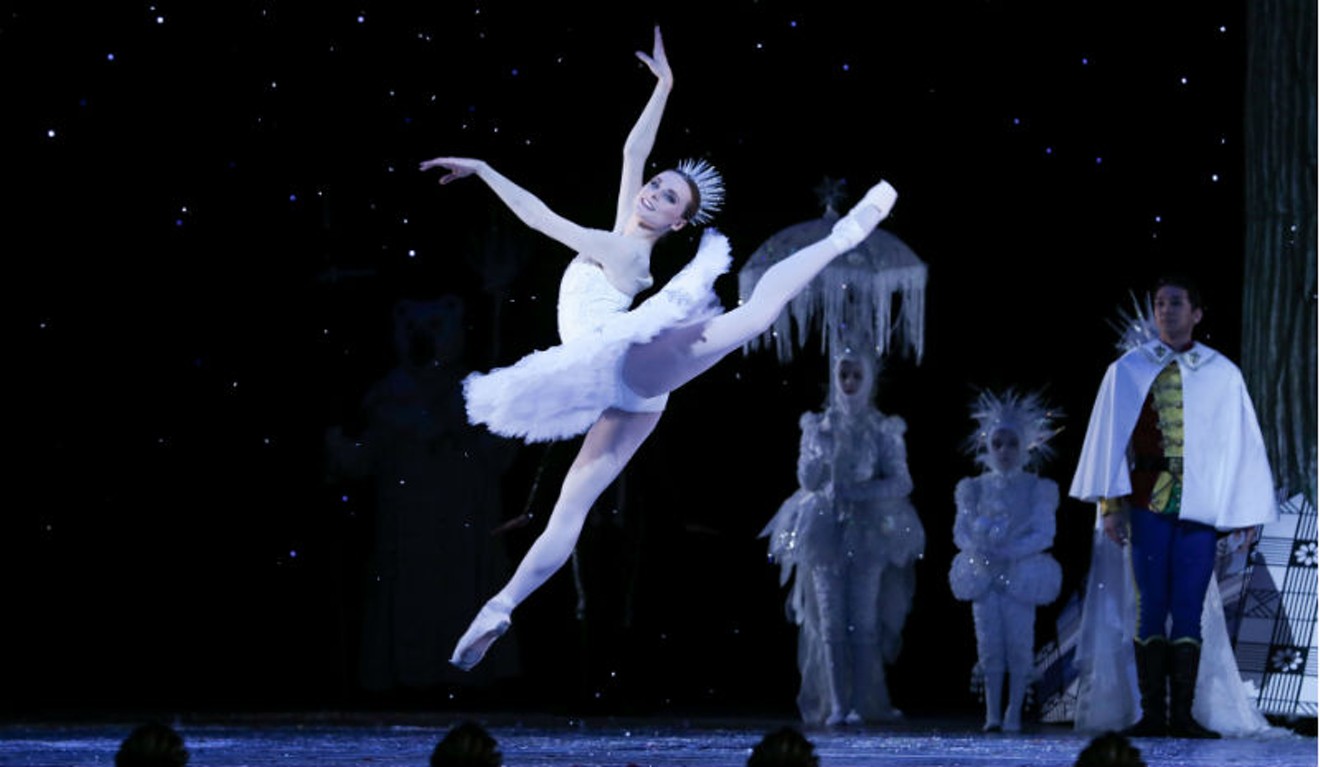 Houston Ballet Corps de Ballet dancer Gabrielle Johnson as Flurry in Stanton Welch's The Nutcracker. Photo by Amitava Sarkar/Courtesy of Houston Ballet
Growing up in Anchorage, Alaska, there wasn't a whole lot of professional dance theater to be seen. So when the Cincinnati Ballet came to perform, it was a really special and exciting experience for young ballet student Gabrielle Johnson.

The troupe came with a performance of The Nutcracker and as she watched them, it only solidified Johnson's resolve to be a professional dancer someday.

So it is more than fitting that Johnson, now miles removed from Anchorage as a member of Houston Ballet's Corps de Ballet has grown up to play so many roles in Stanton Welch's version of the wintertime classic. And of all the roles she's playing in the upcoming multi-run at the Wortham, her favorite is as Flurry. "The choreography is is exciting and challenging."

The Nutcracker, of course, is the story of Clara who on Christmas Eve wakes to find that toys have come to life — among them the nutcracker soldier she's been given as a present and subsequently broken by her brother Fritz. There's the wonderful swirling music by Tchaikovsky, the beautiful party scenes, the costume changes, Drosselmeyer and those rats! - it's all a confection wrapped in an adventure with more than a touch of magic and danger to it.

And it is the one time of year for certain that a lot of young girls and boys go to the ballet with their parents.

Johnson became interested in ballet as a seven-year-old when a 12-year-old cousin who was taking lessons, decided to teach her. After a summer of this, Johnson asked her parents to enroll her in formal classes. "I just fell in love with it. I just loved the constant challenge and having something to do after school that wasn't homework." She went on to study dance at the ABT Jacqueline Kennedy Onassis School in New York and was in the company for four years before coming to Houston in 2015.

The Nutcracker is a ballet with sparkling roles for the Nutcracker Prince, the Sugar Plum Fairy and Clara, but the corps really gets to shine as well (think Russian dancers!). During this season, besides Flurry, Johnson will also play or appear as part of: Louise, Hilda (Friend of Louise), Older Military (Mothers), Royal Guard, Columbine, Snowflake, Spanish Lady, Character Lady, Sailor Woman and Flower Couple.

How does she keep them all straight?  "A lot of rehearsals," she says. "And this will be the fourth time doing this Nutcracker. It's kind of in my body now."

Part of the reason she likes dancing Flurry so much, she says, is the costume. "It's my favorite costume. It’s a white sparkly tutu and a little sparkly crown."

Asked what she would advise any young girl or boy who is thinking about making ballet their career, John says she would tell them: "It’s very hard and you should probably know that it’s what you really want to do. I couldn’t imagine pursuing it unless you truly wanted it and loved it."

And why do Houston audiences continue to turn out in force for The Nutcracker?

"The Nutcracker is a timeless Christmas tradition," Johnson says. "Stanton Welch's The Nutcracker specifically is whimsical and re-imagined takes on a classic production. It's for people of all ages.

Performances are scheduled for November 29 thought December 29 at 7:30 p.m. Tuesdays through Sundays and 2 p.m. Saturdays and Sundays with a Monday performance on Christmas week. Wortham Theater, 500 Texas. For information, call 713-227-2787 or visit houstonballet.org. $35-$180.
KEEP THE HOUSTON PRESS FREE... Since we started the Houston Press, it has been defined as the free, independent voice of Houston, and we'd like to keep it that way. With local media under siege, it's more important than ever for us to rally support behind funding our local journalism. You can help by participating in our "I Support" program, allowing us to keep offering readers access to our incisive coverage of local news, food and culture with no paywalls.
Make a one-time donation today for as little as $1.