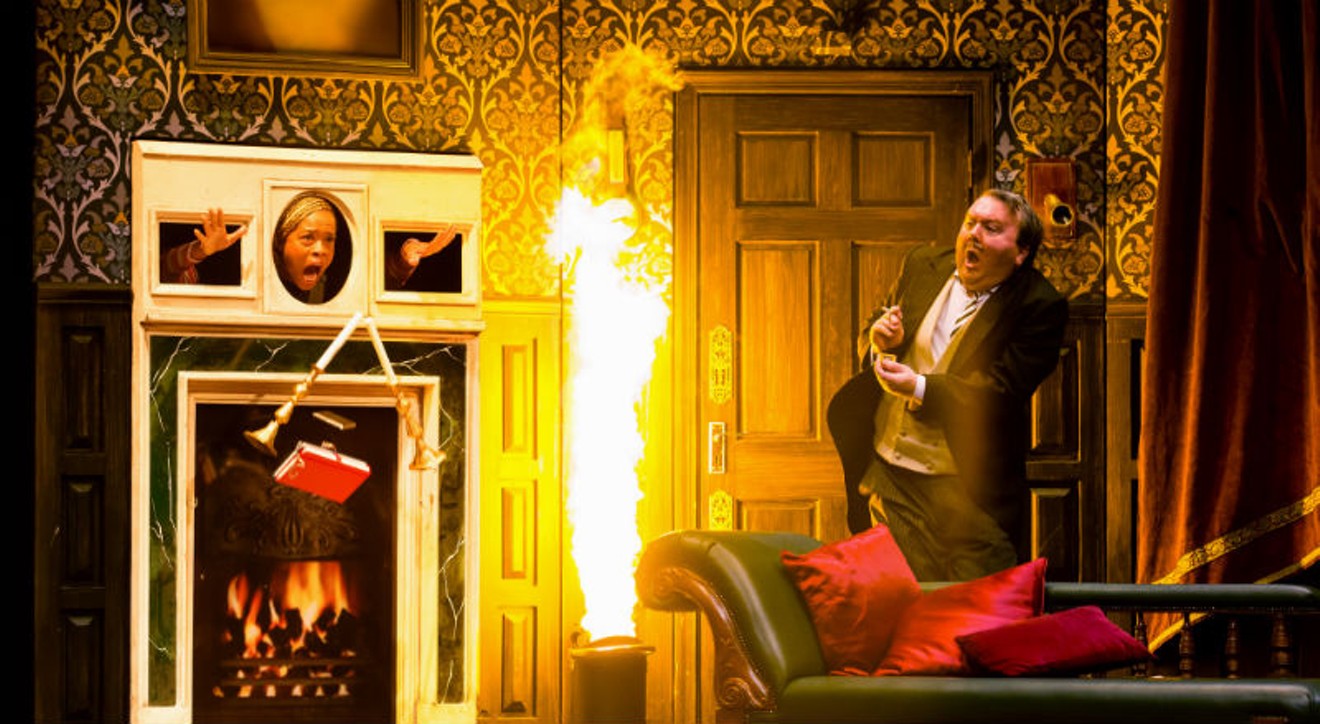 Angela Grovey and Scott Cote in The Play That Went Wrong Photo by Jeremy Daniel
A drama club is doing its best to put on a 1920s mystery Murder at Haversham Manor and alas, things are not going as planned. It's Tony Award-winning The Play That Goes Wrong now coming to Houston courtesy of Mischer Neurosciences Broadway at the Hobby and bringing with it, a former Houston area resident.

Angela Grovey (Broadway: Escape to Margaritaville, Leap of Faith), a graduate of Elkins High School in Missouri City,  is usually involved in musical theater, but relished the chance to jump into the slapstick world in a play. She plays Annie, the stage manager in the troupe.

Throughout the play a number of malfunctions occur including collapsing floors, doors that don't open easily, props falling right and left. Actors forget their lines and suffer physical harm while they try so hard to perform the murder mystery flawlessly.

Essential to the success of this play is timing, Grovey says. The company of 12 must not only learn its lines but know exactly where and when to move on the stage to make the "mistakes" appear effortless and real. "The timing of it is very similar to a musical. There are certain beats and timing and spacing that are very very specific and important for our safety."

Asked if sometimes things don't go exactly as planned, she laughs, and says yes. "When things go correctly it just means our play goes right for a longer amount of time. You constantly don’t know when the ball's about to drop. There’s some planned droppings of balls but sometimes those don't even drop and others drop. This is like an actor's dream to actively listen and engage onstage every day because things happen incorrectly all the time. "

As a longtime student of theater, and professional actor, Grovey says she  has to go against what she's always been taught to work in this play. "Acting 101 is to look into people’s eyes and respond. For my character I can’t really do that always. That has been a challenge." Not knowing really allows me to have a lot of freedom within the pay we want to exercise with precision."

Grovey says she has been very involved in the arts from an early age. She was a member of the choir as well as on the debate team and was president of her class at Elkins High School in Missouri City. In her senior year she had to make the decision whether to pursue politics or theater. Theater won out and she went to the Chicago College of Performing Arts and later onto Broadway.

Since there is the proverbial play within the play, Grovey says she goes through quite distinctive costume changes when she, as stage manager, is forced into an acting role and has to don period dress.

The two-act is for anyone who likes to laugh, she says. "You don't have to come in with any preconceived notions. Just run and get a ticket."

Performances are scheduled for March 26-31 at 7:30 p.m. Tuesday through Thursday and Sunday, 8 p.m. Friday and Saturday and 2 p.m. Saturday and Sunday at the Hobby Center, 800 Bagby. For information, call 713-315-2525 or visit thehobbycenter.org or broadwayatthehobbycenter.com. $26-$110.
KEEP THE HOUSTON PRESS FREE... Since we started the Houston Press, it has been defined as the free, independent voice of Houston, and we'd like to keep it that way. With local media under siege, it's more important than ever for us to rally support behind funding our local journalism. You can help by participating in our "I Support" program, allowing us to keep offering readers access to our incisive coverage of local news, food and culture with no paywalls.
Make a one-time donation today for as little as $1.