The Three Musketeers Offers Adventure, Romance and Swashbuckling All Round at the Alley 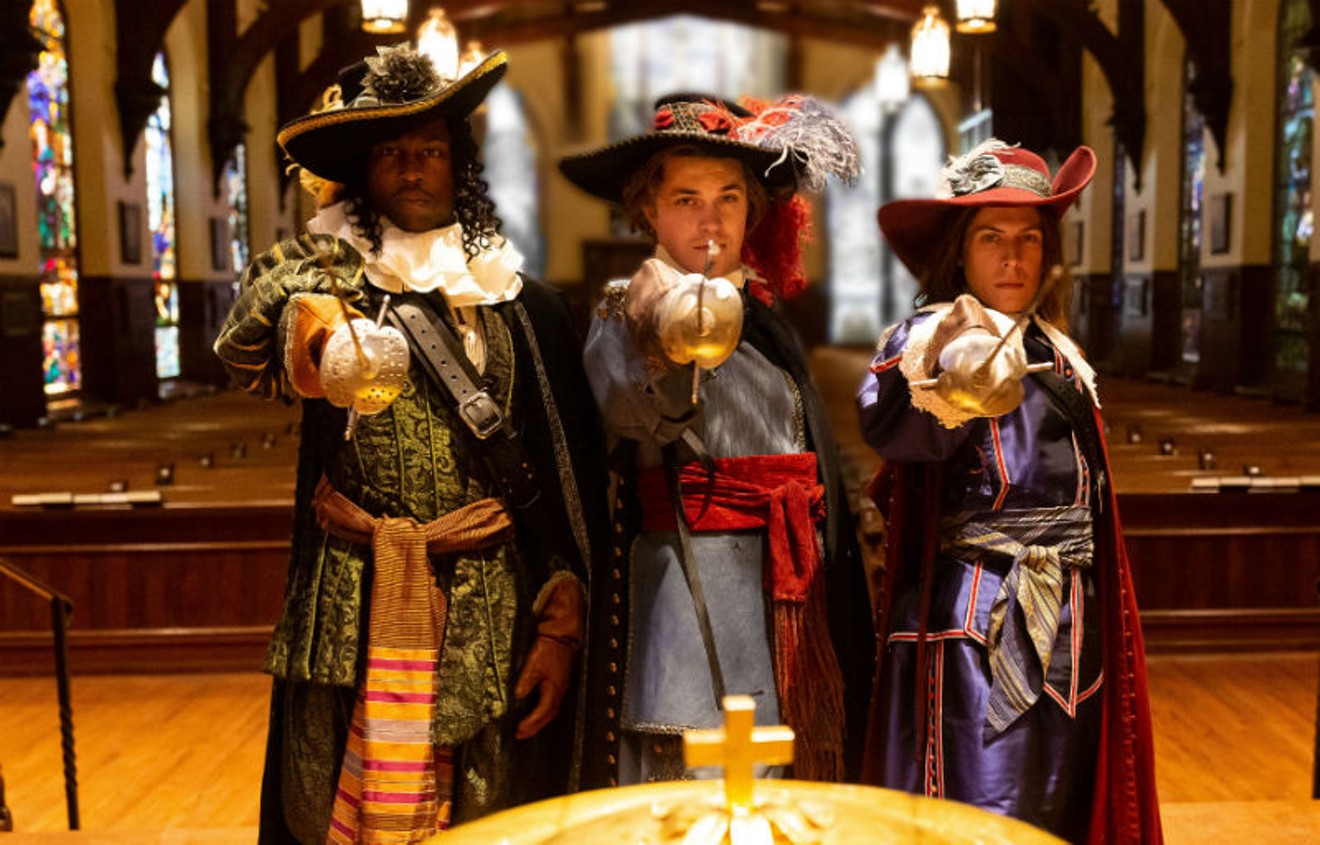 Photo by Lynn Lane
Athos, Porthos and Aramis — their names have called out through the ages ever since Alexandre Dumas wrote his classic adventure story The Three Musketeers. And now in an adaptation by Ken Ludwig's the family-friendly The Three Musketeers is coming to the Alley Theatre in a tale filled with adventure and swashbuckling galore.

The story begins with D’Artagnan who is not a musketeer, but reveres them for their notable exploits Set in 1625, the play begins with  D’Artagnan's journey to Paris, accompanied by his sister who dresses as a young man and is no idle bystander. Once in the capital city, they meet the famous musketeers and work with them to protect the Queen of France. The evil villains in all this: Cardinal Richelieu and Countess de Winter, AKA Milady.

Stanley Andrew Jackson III plays the D’Artagnan role, something he says growing up he never imagined for himself. But he clearly revels in the chance. “He’s life. He’s courage. He’s youth. He’s a young man destined for adventure. He’s loving, passionate, kind, strong and also weak.”

Asked why D'Artagnan wants so badly to be a musketeer, Jackson says: "I think it has something to do with honor and having a purpose. They are protectors. But they also like to have a good time. and enjoy life. And I think these are all the things this young boy growing up in a small town desires. "

When Jackson was 10 years old, he and his family left New Orleans to join his mom who was here in Houston. “It was in Houston that I started acting,” he says, beginning at the Drew Academy and then graduating from Carver, a magnet high school for technology and the arts in the Acres Homes neighborhood of Houston ISD.

He went to Howard University for undergrad and while there spent one month the summer after his junior year  in the UK at the British American Drama Academy among 90 students selected for the program from the United States. From that experience he decided he wanted more and went on to get his master’s from The Royal Central School of Speech and Drama. From there he spent two years in New Zealand (six months of them in Australia) doing Shakespeare.

Deciding it was time to move on, Jackson came back to Houston  a year ago and three months ago, not intending to work here, he says, but to figure out what was next. After eight months of not doing anything he went to one audition at the Ensemble Theatre where he was cast as an understudy in one of their shows.

He was on vacation in New Orleans when he got an email from Ensemble that they couldn't fine his phone number. He emailed back and in short order got a call from Josh Morrison at Stages Repertory Theatre asking him to come in to audition that night for a lead role in Swimming While Drowning – the original actor cast in the play had had to drop out and the play was opening in ten days. Jackson got that part and others (NSFW at Stages where he worked with actor David Matranga who’s also in Musketeers) including his chance on the Alley stage now in Musketeers. .

Directions from director Mark Shanahan, making another one of his not infrequent visits to the Alley include his asking the actors to “funny it up,” Jackson says. "Because Ican get into the seriousness of it and the drama of it. But he is really trying to find the lightness and the humor so we can go in and out of those moments and take the audience and ourselves on a real adventure.."

Fighting is, of course, an important component of this play and D’Artagnan has nine fights during it. Jackson credits fight choreographer H. Russ Brown with “transforming me into a pretty nice sword fighter,” although with all the Shakespeare experience in his background, this is clearly not a completely new component to him.

The demands of sword fighting even carry over into the costumes with Jackson explaining that he’s had two fittings so far and he’s performed some of his moves in them to make sure he’ll be able to do them in performance.

Why should everyone want to attend this show? “Because it is fun. It’s love. It’s romance. I's adventure.It’s danger,” Jackson says with a smile. “And there’s sword fighting!”

Performances are scheduled for May 31 through June 30 at 7:30 p.m. Tuesdays through Thursdays and Sundays, 8 p.m. Fridays and Saturdays and 2:30 p.m. Saturdays and Sunday at the Alley Theatre, 615 Texas, For information, call 713-220-5700 or visit alleytheatre.org. $28-$100.
KEEP THE HOUSTON PRESS FREE... Since we started the Houston Press, it has been defined as the free, independent voice of Houston, and we'd like to keep it that way. With local media under siege, it's more important than ever for us to rally support behind funding our local journalism. You can help by participating in our "I Support" program, allowing us to keep offering readers access to our incisive coverage of local news, food and culture with no paywalls.
Make a one-time donation today for as little as $1.