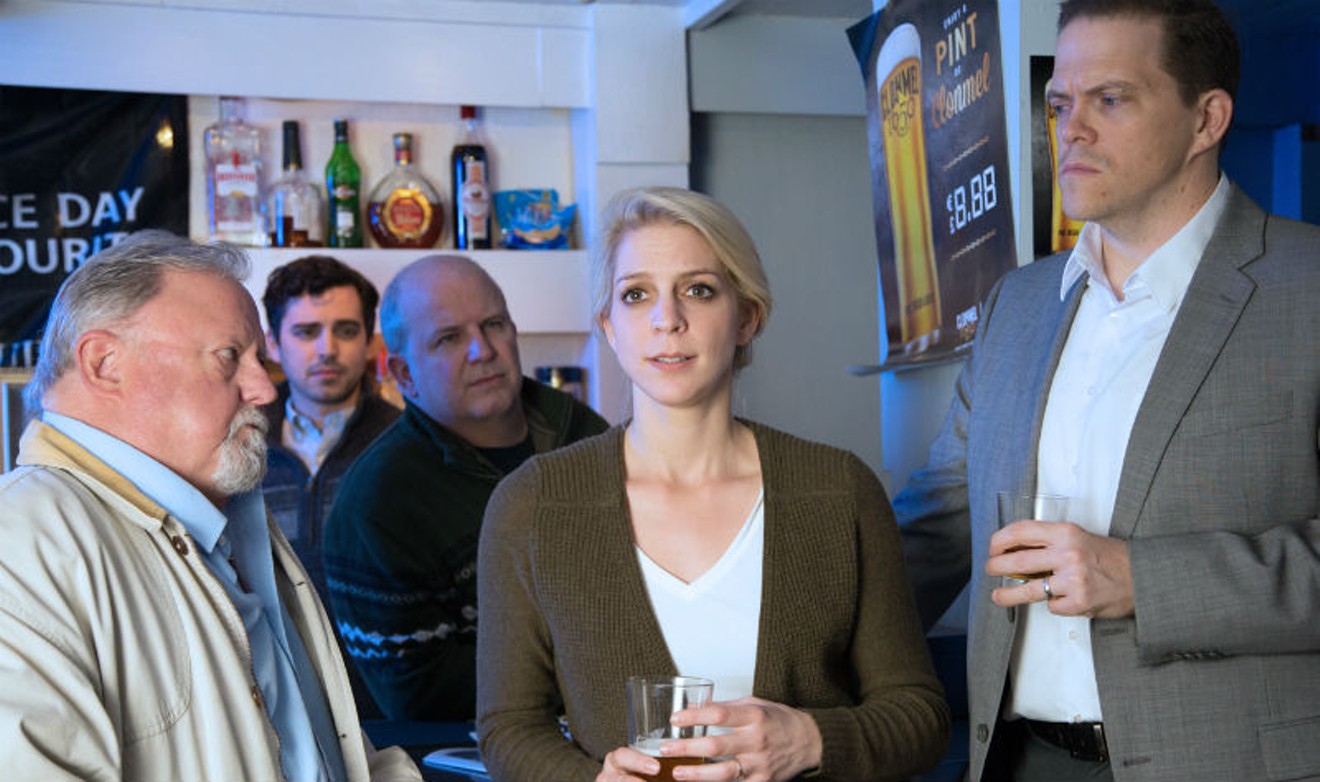 Ghost stories. Stories whose prime real estate seems to be in campfire settings, haunted houses, and around ouija boards, are being told in a small Irish pub in the middle of nowhere in Conor McPherson's The Weir coming to Main Street Theater.

No stark, barren interior, this bar is warm and welcoming, says actor Mark Roberts, inviting people in to share their tales. And on this one night, Valerie, a woman new to town comes into the bar and the regulars there trot out their stories.

Roberts plays Jim, a middle-aged local. "He is a guy that kind of does odd jobs. He’s very sort of even-keeled. He helps a lot of them to tell their stories. They'll refer to him or ask him questions. He knows a lot of the history about the surrounding area and about the people," Roberts says.

This isn't the first time Roberts has been in this play. In the 2003 Main Street Theater version he played the part of Brendan, the bar's owner. He welcomed the chance to return to it. "I actually think this is a very well-written play," he says. "He's able to show each of these characters' humanity through the stories that they tell and the way they interact with the other people. It's one of those plays it's really just fun when it gets right down to it."

Most of the stories are not very scary, Roberts says. "They're eerie; they're supernatural. I think the one that Jim tells is just a little bit creepy even. They certainly make you think and if you were to go home and you're on your own I think you would be possibly creeped out if you were in a house that was dark and scary."

As it turns out, Valerie has a story that is sad, a bit scary and somewhat creepy, Roberts says."Not only that, but it's real. In the context of the play, her story actually happened to her. It kind of takes it up a notch when she tells her story," he says.

Cast members have been rehearsing with Carolyn Johnson, their dialect coach, to get their Irish accents down, Roberts says. Johnson, of course, is well known for her acting abilities as well.

Roberts says this play will have wide appeal because of its stories and actors. Conor McPherson is a masterful story teller, Roberts says. "You love to listen. He really knows how to tell a story. These characters are so vibrant and full of life it makes people ready and excited to hear these stories," he promises.

Performances are scheduled for March 16 through April 7 13 at 7:30 p.m. Thursdays through Saturdays and 3 p.m. Sundays at Main Street Theater- Rice Village, 2540 Times Boulevard. For information, call 713-524-6706 or visit mainstreettheater,com. $36-$45. Under age 30: $20. Discounts for students, seniors and military personnel and their families.
KEEP THE HOUSTON PRESS FREE... Since we started the Houston Press, it has been defined as the free, independent voice of Houston, and we'd like to keep it that way. With local media under siege, it's more important than ever for us to rally support behind funding our local journalism. You can help by participating in our "I Support" program, allowing us to keep offering readers access to our incisive coverage of local news, food and culture with no paywalls.
Make a one-time donation today for as little as $1.