Beauty and the Beast Boasts an Indelible Cast of Supporting Characters 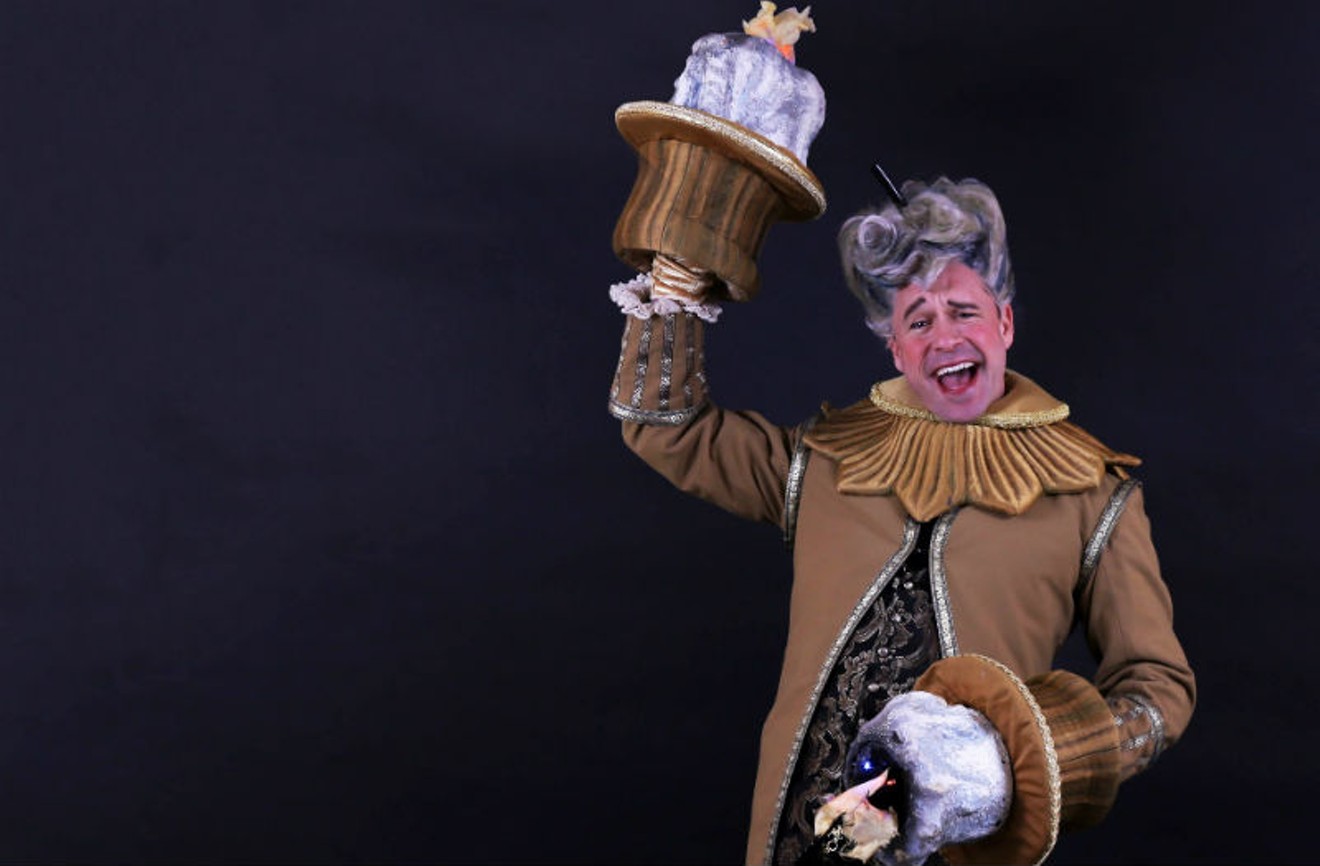 James Patterson as Lumiere was a standout. Photo by Laura Hagen

Of all the world premieres produced by Theatre Under the Stars over its 50-years run, only Beauty and the Beast remains the golden goose. I don't think Chaplin, Phantom, Sir Jack!, What Ever Happened to Baby Jane?, or Zorro, the Musical have added anything substantial to TUTS's bottom line, but Houston's preeminent musical producer struck gold when former artistic director Frank Young negotiated with Disney to produce its first Broadway venture and preview it in Houston. Beauty and the Beast was a huge smash at the Music Hall and subsequently ran on Broadway for 13 years. The residuals continue to roll in.

The Disney film (1991), the first animated movie to be nominated for Best Picture, is a certifiable classic. Composer Alan Menken and lyricist Howard Ashman won the Oscar for Best Original Song, “Beauty and the Beast,” as well as being nominated for songs “Belle” and “Be Our Guest.” Menken won a second Oscar for Best Original Score. Previously, their The Little Mermaid ushered in a Hollywood resurgence for Disney, using a big old boost of Broadway chutzpah. These cartoons were practically Broadway shows, full of production numbers and ballads that honored the structure of great musicals from the past, as well as riffing on Golden Hollywood's musical history. Is there any greater homage to surrealist choreographer Busby Berkeley than the “Be Our Guest” sequence in Beauty with its kaleidoscopic kick line and phantasmagorical images that cry out for overhead shots, leggy chorines, and lap dissolves.

The current show can't do justice to Hollywood's camera wizardry, but it tries its damnedest and basically succeeds with a shimmering gold mylar curtain and a stage full of eager dancers dressed as cutlery, dishes, and napkins. Led by a sparkling James Patterson, as candelabra Lumiere, as if channeling a vibrantly sexy Maurice Chevalier from his ancient Paramount Pictures heyday, this showstopping number is the best in the show, just like in the movie. What's better in a musical comedy than an entire cast coming at you over the footlights, high kicking and singing up a storm?

The rest of Beauty doesn't have this kind of kinetic energy, although in the many iterations I've seen over the years, this supporting cast may be the best at capturing the show's antic spirit.

Patterson is ideal; as is Price Waldman's prissy Cogsworth, the Beast's major domo, whose mantle clock is adding more gears daily unless the spell is broken. And who can fault Keith Hines as Gaston, the macho bully who wants Belle for himself because...well, who else should have him? Impressively buff, Hines sports biceps for days and an equally booming baritone. Barrett Riggins, as toady Lefou, miraculously downplays the cartoony aspects of his character and gives him a soft spot. He's the first actor in years to make Lefou un-annoying.

That leaves us with Beauty and the Beast. Delphi Borich, as Belle, is exceptionally pretty with voice to match. All her power ballads – and many have been added to the movie's original score to beef up the show's length – are hit out of the Hobby without exception. She has charm, grace, intelligence, strength: all the traits Belle must have, but writer Linda Woolverton fails her. This provincial Disney princess wants a genteel beast, someone who says “please” and has proper table manners and knows how to fold a napkin. Where's the beast in this story? Where's the taming? Where's the heat?

As the Beast, Michael Burrell snorts magnificently in his opening scenes. He's ready to pounce. But before long he morphs into Bert Lahr, all befuddled and at wit's end. He has a magnificent Broadway belter's voice; and his anthems, “How Long Must This Go On?” and “If I Can't Love Her?” are worthy of American Idol. But the Beast is tamed too early and the feral's knocked out of him. His transformation scene lacks the special effects from previous productions as he vanishes from the staircase – slowly – and then walks through the magic mirror.

As Garbo once said of the transformation scene from Jean Cocteau's incandescent film version (1946), when the magnificent animal is changed into an unsexed pantalooned prince, “Give me back my beast.”

Even if your little ones have seen the DVD a thousand times, there's no excuse for them to miss Beauty and the Beast live on stage. It's not the same, and that's the point. The message is noble (don't judge a book by its cover), the dancing sparkles, the singers are very fine, the characters are funny, and, oh, those songs! Of the new additions to the score, only “Human Again,” with its cheeky Parisian boulevard insouciance, rises to the exceptional level of the movie's iconic numbers, but you can't have everything, not even on Broadway. If you love the movie, this live-action version won't disappoint. Too much.

Disney's Beauty and the Beast continues through December 23 at 7:30 p.m. Tuesdays through Thursdays and Sundays; 8 p.m. Fridays an,d Saturdays; and 2 p.m. Saturdays and Sunday at the  Hobby Center, 800 Bagby. For information, call 713-558-8887 or visit tuts.com. $30-$134.50.
KEEP THE HOUSTON PRESS FREE... Since we started the Houston Press, it has been defined as the free, independent voice of Houston, and we'd like to keep it that way. With local media under siege, it's more important than ever for us to rally support behind funding our local journalism. You can help by participating in our "I Support" program, allowing us to keep offering readers access to our incisive coverage of local news, food and culture with no paywalls.
Make a one-time donation today for as little as $1.