Evil Dead Entertains Its Audience in All Its Stupid, Gory Glory 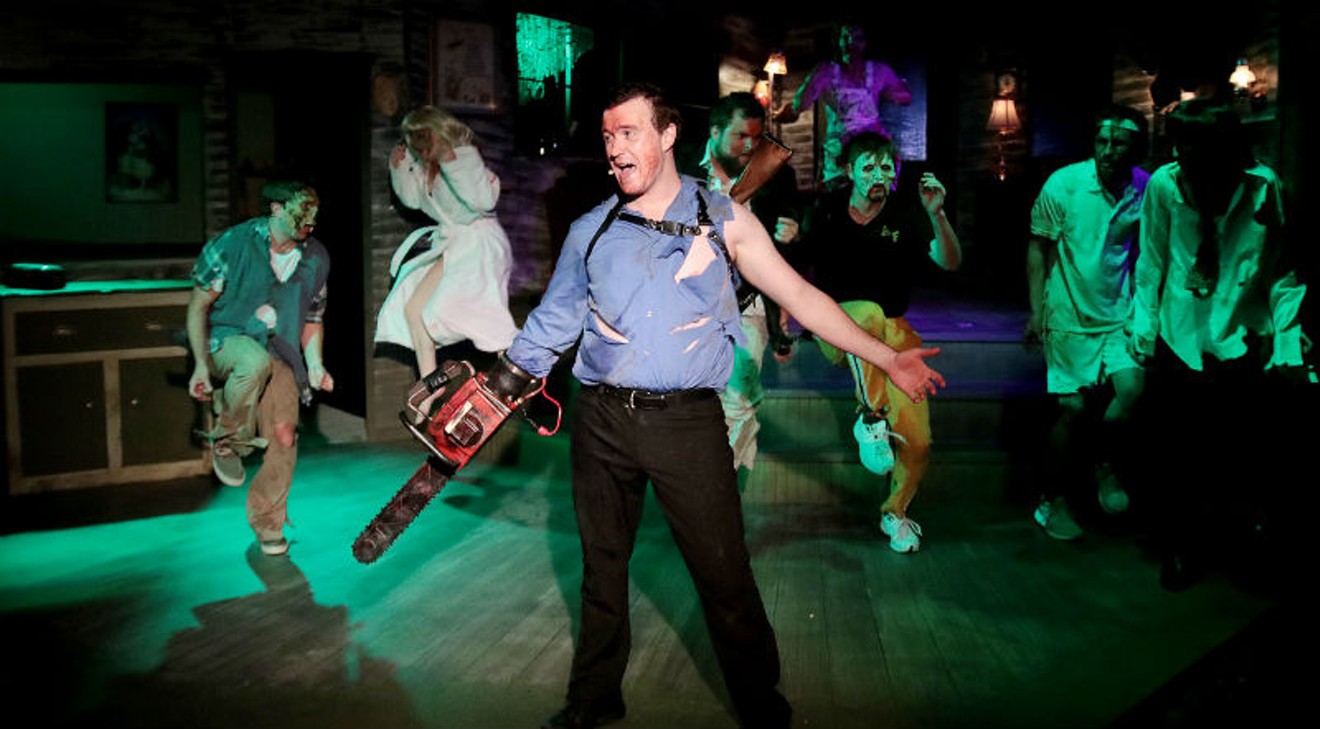 In all its gory glory: Evil Dead Photo by Pin Lim 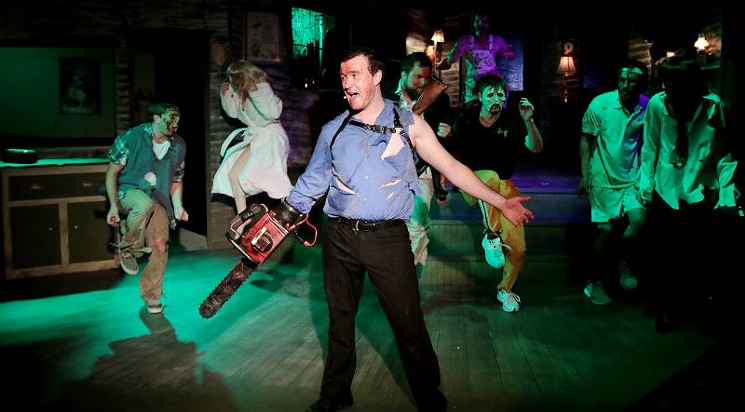 In all its gory glory: Evil Dead
Photo by Pin Lim
There are certain musicals that are immune to criticism. Hamilton, for one, because it's brilliant, and Evil Dead, because it's so...well, stupid. (Holy Ziegfeld, I can't believe I've actually mentioned Hamilton in the same sentence as Evil Dead.)

A send-up of a send-up, this Grade B musical (2003), spawned from Sam Raimi’s wildly successful horror flick trio, is a campy composite, as cheesy and low-rent as they come. Maybe that's why it's become a cult hit, especially around Halloween. Yet even Obsidian Theater, which has won our Houston Theater Award for Best Musical two years running, can't put much oomph into this anemic little show, try as it might.

Not even close to its progenitors – the naughty Rocky Horror Show or that delicious mother of all horror spoof musicals, Little Shop of Horrors – Evil Dead has requisite gore (self-amputation, chainsaw attacks, knives in the back, spurting rivers of blood); stupid characters who do stupid things, like leave the cabin in the middle of the night to explore strange noises; a book of the dead that when spoken aloud summons forth demons; horny college kids on spring break; that sort of thing. It’s all so clumsy that criticism can’t possibly do it harm — or good. The pacing's clunky, there are too many pauses, and most of the cast doesn't seem comfortable showing their hormones.

Even with their combined eight hands, the four composers can't write one song that sticks in our head. The dance of the demons, “Do the Necronomicon,” is fairly catchy with its Floss movement, where choreographers Breyia Walker, Elizabeth Tinder, and Sara Denton bring out Obsidian's sassy spirit. But the lyrics by George Reinblatt, the most accomplished of the creators, are forced, without wit, and flatly vulgar. What would Ira Gershwin do with the tasteless “What the F**k Was That?” or the closing production number “Blew That Bitch Away”? Where's the pizzazz, the tongue-in-cheek snap? Making fun of actor Henry Winkler for his ‘70s persona The Fonz is awfully lame. References that were once so cutting-edge with smarmy irony now just fall with horrifying thud. Everything in this musical falls flat.

The Obsidian band, good as it is (Eduardo Guzman, Luke Hubley, Jim Maguire), is too loud for the inadequate miking. The amplification is spotty at best, and some performers had to do without. In this space no bigger than a shoe box, if a singer can't put a song across the footlights, why were they hired in the first place?

The entire production screams “let's put on a show.” Caitlin Dean's cabin set would bring a smile to Fixer Upper's Joanna Gaines with its gray shiplap, basket light fixtures, and mounted animal skulls. The enchanted evil trees bring a smile, though, and the gore's handled fairly well, spurting in comic sprays when a head or hand is decapitated, and then dutifully cleaned up during intermission by an intrepid mop-wielding stagehand.

But when the only comedy comes from a singing moose head or a hyper puppet squirrel scampering across the kitchen counter, what's left? Obviously, the audience thought there were more laughs than I, so what do I know? Multiple pre-show drinks and a couple of tokes might help. Anybody have some?

Evil Dead continues through October 27 at 8 p.m. Thursdays, Fridays, Saturdays and October 15, and 11:30 p.m. October 6 and 20. Don't miss a special Halloween after party on October 26; just $5 extra for spooky fun. Obsidian Theater, 3522 White Oak. For information, call 832-889-7837 or visit obsidiantheater.org. $30 to $45.
KEEP THE HOUSTON PRESS FREE... Since we started the Houston Press, it has been defined as the free, independent voice of Houston, and we'd like to keep it that way. With local media under siege, it's more important than ever for us to rally support behind funding our local journalism. You can help by participating in our "I Support" program, allowing us to keep offering readers access to our incisive coverage of local news, food and culture with no paywalls.
Make a one-time donation today for as little as $1.