So Nice to Have Hello Dolly! Back Where She Belongs 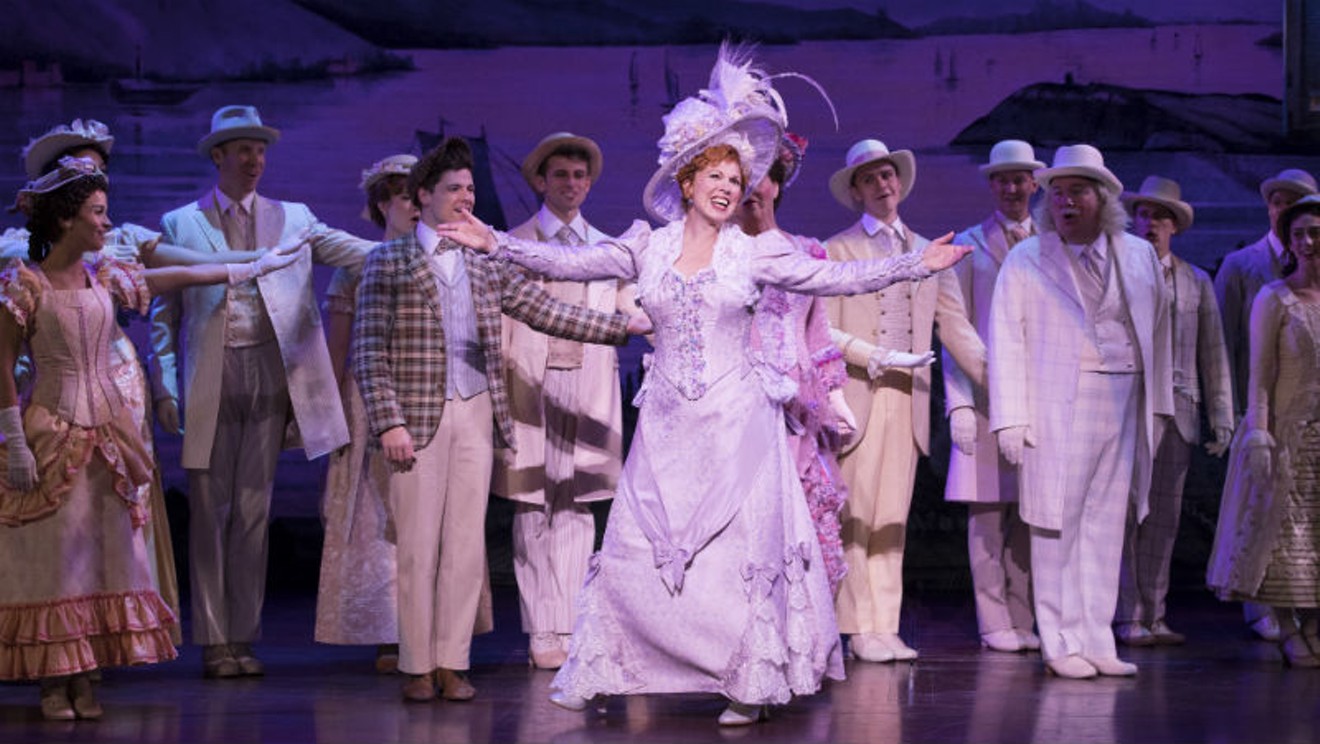 Hello Dolly! indeed. Photo by Julieta Cervantes
Is there any other classic Broadway musical as candy-coated as Hello, Dolly! (1964)?

Now playing for a limited run via Broadway at the Hobby, this touring production is the acclaimed 2017 Tony-winning revival, that starred irrepressible Bette Midler as irrepressible matchmaker Dolly Levi.

Although peppered with Broadway pros, there are no box-office names in this cast, but who needs them when you've got star turns from Jerry Herman (music and lyrics), Michael Stewart (book), Warren Carlyle (choreography), Jerry Zaks (director), Santo Loquasto (set and costume), Natasha Katz (lighting), and Larry Hochman (orchestration). The backstage pros channel the legendary spirit of the original Gower Champion production and then elevate the deliciousness.

The stage blazes with confection. Pastel plaids and swoops of silk give Thornton Wilder's turn-of-last-century comic tale a beguiling Neverland overlay. We're definitely in musical comedy territory, a wonderland where the trolley car is pulled by horses in spats, and the lights of 14th Street glisten in Necco wafer brightness. When the mustachioed waiters at the Harmonia Gardens go into their famous Act II “Gallop” before Dolly's equally famous entrance (“Hello, Dolly”), they strut and cakewalk and dash about in syncopated mayhem, looking like some imaginary silent movie from Mack Sennett. When one dancer missed skewering the plated chicken passing by, the inflatable bird bounced to the footlights where it was deftly picked up by another fast-moving dancer and tossed blithely into the wings, to the delight of the audience who applauded heartily. That's how much fun this show is.

Everything is buoyant and breezy. No one has problems that can't be resolved by a clever windmill step, a jaunty triple rhyme, an up-beat tune (of which there are many), or the sight of Dolly wolfing down her dinner, stuffing her mouth with dumplings and finishing it all off with gulps from the gravy boat. This is silliness raised to art.

Carolee Carmello is hardly a household name, but for some musical aficionados she is known as a three-time Tony nominee who's just finished a successful off-Broadway run as cleaver-wielding Mrs. Lovett in Sondheim's Sweeney Todd at NYC's Barrow Street Theatre. (The producers turned a store front into a real pie shop, where theater goers could order meals, not those, we hope, baked by Mrs. Lovett.)

Carmello has a lovely radiance as Dolly. She uses some of Midler's Sophie Tucker mannerisms and oomph, but she brings years of stage experience to make Dolly her own. She's more clear-eyed and level-headed, even while passing out calling cards for any occasion (varicose veins reduced, pierced ears re-plugged, or teaching a clunky salesclerk how to dance and, therefore, find romance.) She's steely and funny with great comic timing, like progenitor Ethel Merman (one of numerous Dollys over the years.) Her life-affirming anthem, “Before the Parade Passes By,” is her personal calling card, a testament that she's entering life again, and you'd better stand out of her way. She ends Act I alone on stage, holding a baton high over her head, triumphant in her pin-spot. Lovely.

John Bolton (Anastasia, Spamalot, Titanic), as half-a-millionaire Horace Vandergelder, is a basso comic foil to the feathery Dolly. He's blustery but harmless, as Dolly intrinsically knows, and Bolton knows how to play curmudgeon with tongue firmly planted in cheek. He makes Horace lovable. His opening Act II solo, “A Penny in My Pocket” (dropped during out-of-town tryouts in 1964 but added to the Midler production so that David Hyde Pierce would have a song-and-dance all for himself) displays his ingratiating ways. He has us in his pocket.

It's a great show, no matter who's in it. And that's not something to be said about all musicals. Hello, Dolly! rolls on. It will entertain and make us gleeful to be watching for generations. If that's not the mark of a classic, I don't know anything.

Performances are scheduled through January 12 at 7:30 p.m. Tuesday through Thursday and Sunday; 8 p.m. Friday and Saturday and 2 p.m. Saturday and Sunday at the Hobby Center, 800 Bagby. For information, call 713-315-2525 or visit thehobbycenter.org or broadwayatthehobbycenter.com. $35-$120.
KEEP THE HOUSTON PRESS FREE... Since we started the Houston Press, it has been defined as the free, independent voice of Houston, and we'd like to keep it that way. With local media under siege, it's more important than ever for us to rally support behind funding our local journalism. You can help by participating in our "I Support" program, allowing us to keep offering readers access to our incisive coverage of local news, food and culture with no paywalls.
Make a one-time donation today for as little as $1.