Jesus Hopped the 'A' Train is Hypnotic Theater, Well-Served by an Electric Joseph "Joe P" Palmore 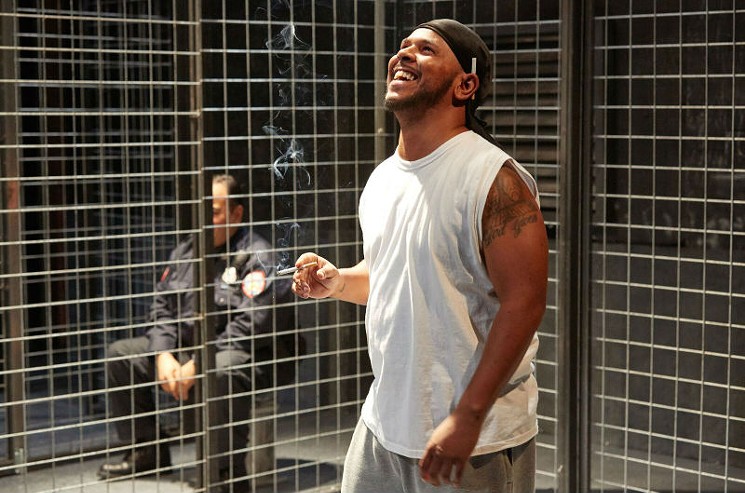 He plays – no, inhabits – Lucius, a notoriously vicious serial killer entombed in NY's infamous Riker's Island correctional facility, where he awaits extradition to Florida and his inevitable execution. He has no remorse for his brutal crimes and fully accepts his guilt. He has found God, you see, and the big man upstairs has forgiven him. He bathes in the outdoor sun for his hour a day as if in benediction. “Take it,” he implores yard mate Angel (Mateo Mpinduzi-Mott), arms spread wide against the warm rays.

In Stephen Adly Guirgis' Jesus Hopped the 'A' Train, a hypnotic and equally alive production from 4th Wall Theatre Company, Lucius is an improbable martyr. Brutalized at a young age, this psychopath is damaged goods but now fully accepts responsibility. He knows it's his time. “Take it,” is his mantra.

Palmore is so vivid he eats up the caged space. He does push-ups and jumping jacks while reciting the books of the Old Testament backward. He prowls and taunts the sadistic guard Valdez (Santry Rush), while holding sympathetic guard D'Amico (Orlando Arriaga) in sweaty subservience. (It's D'Amico who breaks the rules and smuggles him Oreos, shepherd's pie, and cigarettes until relieved of his duty by Valdez, who can't wait to see Lucius fry.) Palmore shoots off sparks even when sitting on the bucket used as chair in the outdoor confinement. He is galvanic even when static. Called “superstar” in mockery by Valdez, his other pen name is “Black Plague,” and regardless of newfound faith his eyes are wild like a Biblical prophet's, full of visions and danger.

The entire cast works as one, although Palmore holds all the aces. Mpinduzi-Mott rises to the challenge. With a halo of exquisitely twisted cornrows, his Angel is innocence defined. Well, not quite innocent, but well-meaning. He did shoot the charismatic cult leader, but only in an attempt to rescue best friend Joey from his clutches. And he only shot him in the ass. Unfortunately, the man died during the operation to remove the bullet, so Angel now faces a murder charge. He's in the maw of the criminal justice system, and he's about to be chewed up and spit out. His defense is led by public defender Mary Jane (Christy Watkins), a do-gooder who invariably ends up not doing so well by him. She knows the system, its quirky byways, its quid-pro-quo, but she too is damaged goods. You know where good intentions oft lead.

If all this sounds a bit familiar then you've been watching too many re-runs of Law and Order. At times in its many expositional asides and monologues, and thudding punctuational sound effects, you expect to see Jack McCoy enter the frame. However, no TV procedural would dare be so earthy and profane. Guirgas revels in the lowdown, weaving the salt into the wound like fine-art tapestry. It's used as real patois and is the breath of life to his characters. Never has the f-word sounded so much like poetry.

Directed with a rhythmic intensity by Kim Tobin-Lehl and staged inside Ryan McGattigan's movable mesh cages, under Christina Giannelli's crisp and harsh overhead lighting, this gritty and keenly saturated stare into the underbelly of society smacks you hard. “Take it.”

Jesus Hopped the A Train continues through September 29 at 7:30 p.m. Thursdays, Fridays and Saturdays and 3 p.m. Sundays. 7:30 p.m. Monday September 24 pay what you can at Studio 101, Spring Street Studios, 1824 Spring Street. For information, call 832-786-1849 or visit 4thwalltheatreco.com. $17-$53.
KEEP THE HOUSTON PRESS FREE... Since we started the Houston Press, it has been defined as the free, independent voice of Houston, and we'd like to keep it that way. With local media under siege, it's more important than ever for us to rally support behind funding our local journalism. You can help by participating in our "I Support" program, allowing us to keep offering readers access to our incisive coverage of local news, food and culture with no paywalls.
Make a one-time donation today for as little as $1.