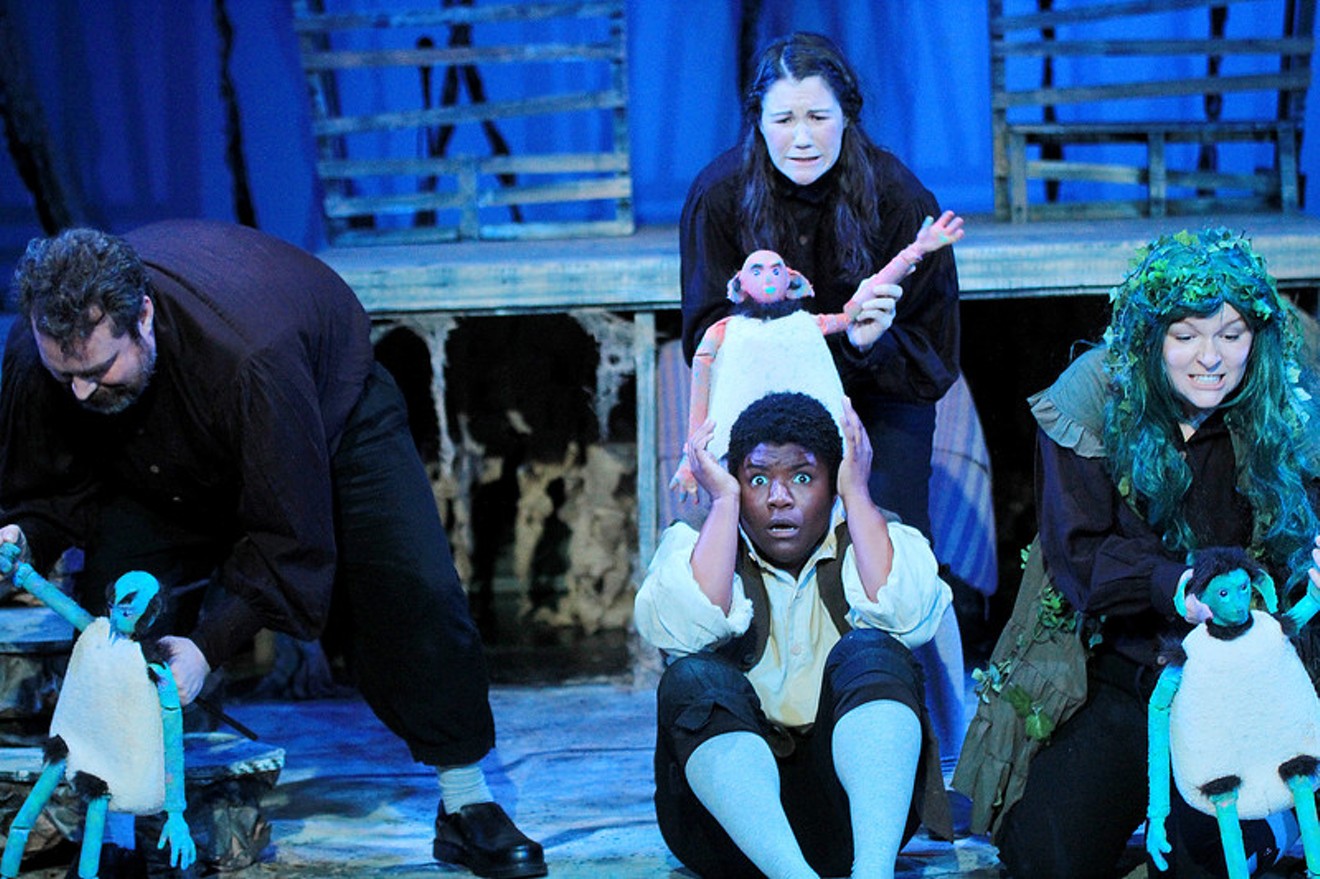 (L-R) Andrew Love as a Troll, Shunté Lofton as Peer Gynt, Alli Villines as a Troll, and Faith Fossett as a Trol Photo by Pin Lim/Forrest Photography
Classical Theatre Company has answered a question I've pondered for years, Why is Henrik Ibsen's seminal drama Peer Gynt (1876) such a rarity? The only stage production I've seen has been Ben Stevenson's 1981 version for Houston Ballet, a phantasmagoric adventure yarn that used almost all of Edvard Grieg's original atmospheric score that accompanied the play's Oslo's premiere. Grieg's beloved music has survived intact. The play – hardly at all.

One of Ibsen's most influential yet unknown works, Peer's been more beloved in Europe, through acclaimed 20th-century productions at the Old Vic with Ralph Richardson and Lawrence Olivier, and at the Royal Shakespeare Company in1995. Famed Swedish film director Ingmar Bergman staged a five-hour version in the '50s, and iconoclastic auteur Robert Wilson staged a co-production for the National Theater of Bergen and the Norwegian Theatre of Oslo in 2006. In America, the illustrious Theatre Guild mounted a Broadway production in 1923 with silent film star Joseph Schildkraut, and, in 1951, Warner's film noir star John Garfield played Peer in a troubled and curtailed 1951 production. There's not a great track record for Peer in America.

One of the first bad boys of theater, Ibsen tweaked polite society with an unflinching look beneath the placid surface of the bourgeoisie. His plays were always controversial, and his harsh realism ushered in modern theater. Without question, Ibsen is the grandfather of what we know as contemporary drama – families in turmoil, hidden secrets revealed, inherited sins, an aching yearning to be free and find oneself. When Nora slams the door at the end of A Doll's House (1879), she walks out on her three children, convention, wifely duty, propriety, patriarchy, position. She slams the door on all of them. As she heads off into unknown territory “to find herself,” she slams the door on the 19th century.

Ibsen loved to slam doors. The Norwegian playwright's impressive work broke all sorts of rules as to what constituted the “well-made” play. As theater's first rebel, his themes covered incest, syphilis, environmental disasters, political cowardice, smugness, rampant egos, and weighty disquisitions from philosopher Kierkegaard. His plays were scandals – and great successes. After the premiere of A Doll's House, any Oslo dinner party invitation came with an engraved caveat not to discuss it in the parlor.

Henrik Ibsen changed the face of theater: in subject, tone, structure, what its characters talked about. and how they said it. Without apology. Ibsen's people strive to find themselves, often without knowing exactly what they want to become. His audience, the middle class, which he labeled pig-headed for its inability to support the dreamer, returned the favor and excoriated his bold works. They were shocked by the ugly mirror Ibsen brandished. Rebuffed, Ibsen just wrote another play.

Based on Norwegian folklore, Peer Gynt is an early work, a verse poem. Ibsen wrote it to be read. It sprawls – and sprawls – through Peer's life from adolescence to old age. Its structure is dreamlike, at times surreal and fantastic, replete with arias for the major characters. Then, in a seismic shift, Ibsen hits you with philosophical discussions on the follies of European colonialism. There are scenes of tenderness, a bit of vaudeville silliness, sudden flashes of domestic realism, then bursts of psychedelic fantasy, a forerunner of what we call magic realism. The play's all over the place, which is part of its charm – as if we're always inside Peer's fertile imagination. But all these stylistic clashes make it inherently difficult to stage. As Grieg said while in the throes of composing, “It is a terribly unmanageable subject.”

Classical's production handles these tonal schisms with a deft comic touch. Directors John Johnston and Kalob Martinez overlay Peer with a Punch-and-Judy approach, much like the troupe's sprightly Fair Maid of the West from last season. There's lightness to it, a buoyant playfulness. We feel the joy. When it doesn't work as smoothly as it should, blame Ibsen. But at its best, the moments of sheer visual pleasure allow us to wallow in the wondrous magic-making that is theater.

Played on a mossy unit set from designer Matthew Keenan and lighted to a fare-thee-well by Christina Giannelli in green, magenta, and amber, Peer is a bright romp interrupted by some serious symbolic Norwegian angst. Irony plays a major role, but how else could you square those delectable troll puppets, designed by co-director Martinez, with Ibsen's deep-dish philosophizing? Ibsen's moralizing doesn't stand a chance. More puppets, please.

Here's one lovely trick. Ingrid's father (Fossett) lectures Peer (Lofton) about his utter lack of morality. In a flash, Fossett dips underneath his bowler hat that's held in place by the actor standing next to him and suddenly transforms into another character. Such visual puns keep the mood light and dexterous.

When Peer daydreams, the clouds overhead are made out of a bed sheet animated on sticks. As he grows older, young Peer circumnavigates the mossy steps of the set until he's overtaken by his older avatar (Love) walking behind. Young country girl Helga (Love, again, with beard) is bedecked with Heidi curls and a little doll attached under his neck. A snippet of Grieg's “In the Hall of the Mountain King” is played on kazoo by ace sound designer Jon Harvey, who's upstage and in full view of the audience while he performs his many effects. When Peer becomes the ultimate entrepreneur, he cools himself with a fan made of dollar bills. The visual surprises throughout are many and delightful.

Shunté Lofton is an irrepressible young Peer Gynt: lying, whoring, fantasizing, boasting. For all his multitude of faults, Peer is Ibsen's Life Force writ large. Reprobate, despicable, deceitful, egotistical, he's got life in spades; modern drama's first anti-hero. He has that eternal spark, though, he's his own man. You might say he's Ibsen himself – the iconoclast, the finger to the system, the writer who left Norway for decades to “find himself.” Lofton has a life force all her own, a glowing physical presence that matches her musical voice. As young Peer, she's peerless.

After years of misadventure and incredible fortune, Lofton's young Peer transforms into Andrew Love's mature Peer – he with a voice that could pierce steel. Now world-weary, but still boastful, Love is solid and resolute. We believe he's the man Lofton would eventually turn into. Wealthy and successful, Peer has everything he has ever desired. He's now the Kaiser of capitalism, a former slave trader and bamboozler of the Chinese, importing cheap idols and, later, missionaries. But he's empty inside. Shadowed by the specter of death who wants to melt his soul in her sizzling frying pan, Peer pleads for absolution. Decades ago he abandoned his true love Solveig for worldly pleasure. Faith, hope, and love lead him home. Patient Solveig, like Penelope at her loom in the Odyssey, waits for him with loving arms. World-weary, he rests his head in her lap, all sins forgiven.

Not for a moment do we believe this tripe.

Classical Theatre can envelop Ibsen in marvelous stagecraft, but there's no way in hell it can make us believe that this lowlife deserves redemption, life force or no. Peer is the ultimate bad boy, for sure, but this saintly, last-minute conversion just won't do.

Maybe that's why Peer Gynt isn't seen as often as its reputation would warrant. Who believes in this Wagnerian mumbo-jumbo? Did Ibsen, himself, want redemption? Absolutely not.

Classical Theatre's visual lushness and directorial sleight-of-hand turn this rare taste of Ibsen into a must-see. I doubt we'll experience another Peer Gynt in our lifetime, While this adaptation needs an edit, the spirit is willing. Ibsen once said that if nobody complained about his plays, why write them? Who's the bad boy now?

Peer Gynt continues through March 1 at 8 p.m Wednesday, February 19 and Monday, February 21; 8 p.m Thursdays, Fridays, Saturdays; and 2:30 p.m. Sundays at Classical Theatre at The Deluxe, 3303 Lyons. For more information, call 713-963-9665 or visit classicaltheatre.org. $10 - $25.
KEEP THE HOUSTON PRESS FREE... Since we started the Houston Press, it has been defined as the free, independent voice of Houston, and we'd like to keep it that way. With local media under siege, it's more important than ever for us to rally support behind funding our local journalism. You can help by participating in our "I Support" program, allowing us to keep offering readers access to our incisive coverage of local news, food and culture with no paywalls.
Make a one-time donation today for as little as $1.