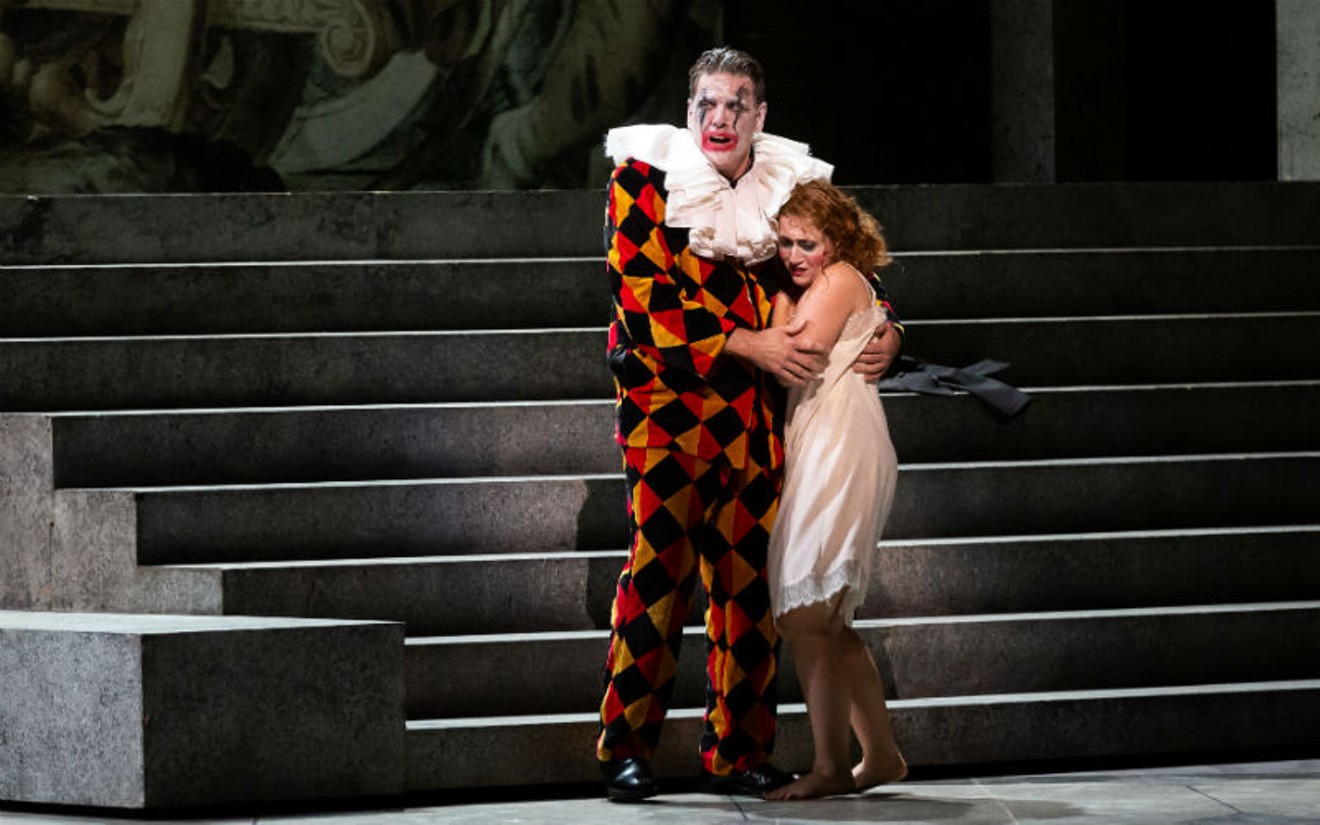 Rigoletto (Michael Mayes) holds his daughter Gilda (Mané Galoyan). Photo by Lynn Lane
If any composer can make you forget an Astros loss, it's Giuseppe Verdi.

On opening night of Rigoletto, Houston Grand Opera flashed the score of Game 5 of the ALCS (with those damned Yankees) during the intermissions. Never say that grand opera isn't for the people. Right before Act III started, there it was on the surtitle screen – Final 4-1. Bummer. The series continues.

But then, what happened next was nothing short of miraculous. All disappointing thoughts of baseball dissipated as the opera coalesced during that most wondrous final act, where you can actually hear Verdi becoming Verdi.

The arias are standouts: “La donna è mobile” (“Woman is fickle”), sung by the wanton Duke; “Bella figlia del amore” (“Beautiful daughter of love”), sung by the vengeful court jester Rigoletto to his despoiled daughter Gilda; that fabulous contrapuntal quartet between hired assassin Sparafucile, his pimped-out sister Maddelena, Rigoletto, and Gilda; there's a wild storm with thunder, lightning, and choral wind; and the dreadful irony of the conclusion where Gilda, still in love with the lecherous Duke, sacrifices herself, while Rigoletto, gloating over whom he thinks is the dead body of the Duke, discovers his beloved Gilda in the bloody sack. It's a swirling masterpiece of an act that only Verdi could have described in such richly apt, psychological music.

The first two acts are pretty good, too, what with Gilda's innocent aria to first love, “Caro nome” (“Sweet name”); the thunderous curse put on jester Rigoletto by disgraced Count Monterone, whose own daughter has been deflowered by the Duke and mocked by Rigoletto; the Duke's silky seduction of innocent Gilda, "È il sol dell'anima" (“Love is the soul's sunshine”); the abdication of Gilda; Rigoletto's plea to the heartless courtiers to save Gilda; Gilda's shame before her father; and the slimy assignation between Rigoletto and amoral Sparafucile.

Full of blood and thunder, unbridled lust, toxic masculinity, and an assault on innocence, Verdi's seventeenth opera was ripe for the condemnation from the skittish 19th-century censors. He was well aware that the 1832 Victor Hugo play, Le Roi s'amuse, had caused a scandal at its Paris premiere, had been closed down by the gendarmes after the first performance, and then had remained banned from the French stage. But he also knew that a good story, adult and shocking, would sell a lot of seats. He didn't suffer fools greatly. So while he and librettist Piave made minor concessions to the Austrian bluestockings who controlled Venice's fabled La Fenice opera house, that had commissioned the work, he carried on knowing exactly what he was doing.

Already known throughout Italy for Nabucco and Macbeth, Verdi established himself as the preeminent composer for the theater with Rigoletto. Not long after the Venice premiere, which was a smash hit, Verdi became an international superstar. Bellini was dead, Rossini had retired, and Donizetti had gone mad. Verdi was next in line to inherit the mantle of his great predecessors, and, with Rigoletto, he was ushered front and center. Opera would never be the same again.

Although HGO's new production (directed by Tomer Zvulun, settings by Erhard Rom, costumes by Jessica Jahn, lighting by Robert Wierzel) waffles in concept – a proto-fascist Italy where the debauched courtiers wear tuxedos, Gilda sports marcelled hair, Sparafucile's low-rent whores look like spent extras out of Lulu, and the gray and dusky turntable set of Venetian windows and classical columns, could have been designed by Mussolini – the opera is blessed by a coterie of exceptional singer/actors. From chorus to principals, they give their all to Verdi. It's thrilling. Maestro Jordan de Souza leads a sprightly orchestra that sparkles in innocence then roars with vengeance. Everything is taut and finely honed, diaphanous, then thick. The singers blossom under him.

With only a week's notice, baritone Michael Mayes replaced an ailing Brian Mulligan, and he made you feel as if he's been singing this difficult role all his young life. Both gruff and tender, with commanding power, he became the snarky jester putting down his betters; the doting, over-protective father; the vengeful-seeking harpy; and, then, grief-stricken lone survivor. He's saddled with a garish clown costume with floppy ruff that has shades of Harlequin and Emil Jannings' pitiful cuckolded Professor Rath in The Blue Angel, but seems a bit out of place for the one-percenter milieu of '20s Mantua. But Mayes is a trouper, has definite stage presence, and sings the hell out of the role.

Tenor Arturo Chacón-Cruz, an HGO Studio alumnus, sings a splendid Duke of Mantua, full of privilege and unbridled political power. He tossed off the opera's signature tune, “La donna è mobile” with panache and had a grand time playing a sexist pig. (For all the lovely arias Verdi wrote for tenor, it was his least favorite voice. As an inside joke, he made the unlikable libertine Duke a tenor role. Although the love ballads are perhaps insincere as is the Duke's character, they remain the opera's most ardently felt.)

But pride of place in HGO's Rigoletto must go to soprano Mané Galoyan, another former HGO Studio artist. Radiant as dewy Gilda in her first throes of love, heavenly as a daughter disgraced, and positively stoic as martyr, she possesses a crystalline voice that cuts through any orchestral texture. She waltzed through Verdi's dramatic coloratura without effort. She can float incandescent pianissimos then belt with Verdian thunder. You always knew where she was on stage, just follow that distinct, clear voice. (She, too, is cursed with an unbecoming costume of day dress and sensible shoes, an outfit no young girl would have ever worn or ordered from Sears, Roebuck and Company.)

Rigoletto is a co-production with Atlanta Opera and The Dallas Opera. They can have the production, but leave the singers here, please.

Rigoletto continues through November 1 at 2 pm. Sunday, October 20; 7:30 p.m. Friday, October 26; Tuesday, October 29; Wednesday, October 30; and Friday, November 1 at the Wortham Theater Center, 500 Texas. Sung in Italian with projected English translations. For information, call 713- 228-6737 or visit houstongrandopera.org. $25 -$270.
KEEP THE HOUSTON PRESS FREE... Since we started the Houston Press, it has been defined as the free, independent voice of Houston, and we'd like to keep it that way. With local media under siege, it's more important than ever for us to rally support behind funding our local journalism. You can help by participating in our "I Support" program, allowing us to keep offering readers access to our incisive coverage of local news, food and culture with no paywalls.
Make a one-time donation today for as little as $1.