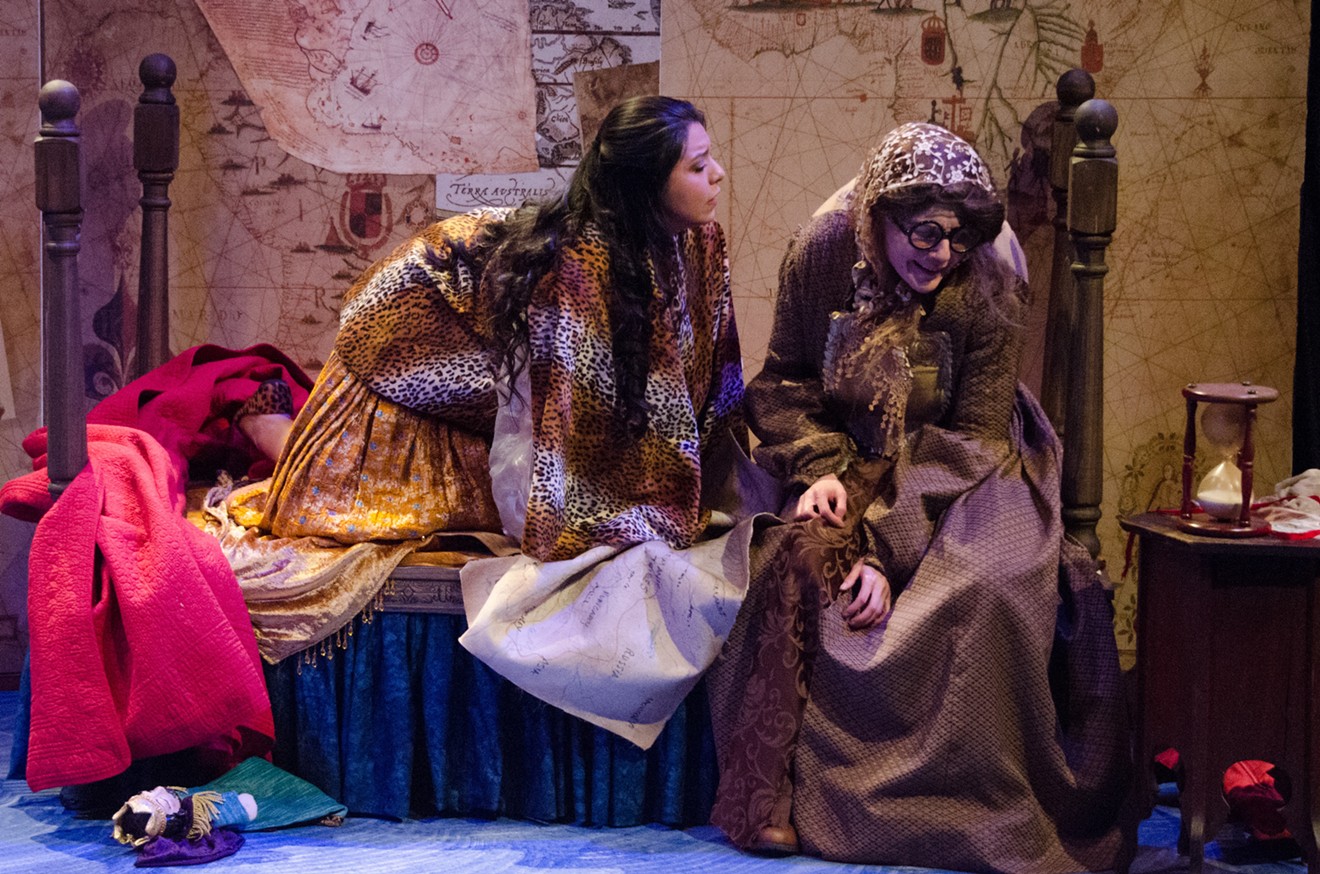 Briana J. Resa and Patricia Duran in The Hunchback of Seville. Photo by Gentle Bear Photography
What if Queen Isabella of Spain had a sister? An adopted, hunchbacked sister who saw more to the world than gold to be pillaged and people to be conquered? Well, that’s the question Charise Castro Smith tries to answer in the Mildred’s Umbrella production of The Hunchback of Seville.

The Hunchback of Seville begins as many the great historical epic does – with thunderous, swelling music that announces the arrival of a hero. Except in this story, it’s not so much a hero as it is that great bringer of European civilization and genocide: Christopher Columbus (played with all the swag of a true narcissist by Rhett Martinez). Wheeled out on a bed subbing as a ship, Spanish flag flying proudly, Martinez’s Columbus breaks the fourth wall and engages in some profanity-laced bragging about discovering the “virgin-ish shores” of the New World™.

As he concludes his "nyah nyah nyah nyah nyah nyah" speech – in a playfully exaggerated Italian accent – two indigenous people emerge who, as every aspect of their culture is now lost, are named only as "One" and "Two." They lament the choice not to ambush the Columbus-led interlopers, muse on choosing diplomacy and ask, "If we treat them to respect, they'll do the same to us, right?" Meanwhile, Columbus’s one-man victory parade concludes with a rousing rendition of "We Are the Champions."

That’s just the prologue, but it sets the stage perfectly for what Smith has done so well in The Hunchback of Seville: crafted an outrageously audacious piece of historical fiction, a relentlessly paced patchwork of truth and imagination littered with just enough asides to provide historical context and reassurances that yes, that horrible thing you just heard is documented fact and not artistic license. It’s also got enough laughs – from anachronisms, sight gags, recurring jokes, and more – to make Mel Brooks proud.

But the actual meat of the story is set 12 years after Columbus’s fateful trip, in 1504, on a freakishly cold day in Seville in the chambers of Maxima Terriblé Segunda (Patricia Duran). Maxima is the adopted, hunchbacked sister of Her Royal Highness Queen Isabella of Spain (played by a stately Elizabeth Black), locked away in a tower for the last 52 years of her life with really only her books, her maps, her cats and her serving woman, Espanta (a risible Elizabeth A.M. Keel).

It’s on this day, after several calls to court have gone unanswered, that Isabella decides to pay Maxima a visit. But Isabella is not alone; she’s accompanied by her 24-year-old daughter, Infanta Juana (Briana J. Resa), a baby-voiced woman-child toting a hand puppet straight out of the Neighborhood of Make-Believe. Isabella has some bad news for Maxima: She (Isabella) is dying and Juana, next in line for the throne, is an imbecile. Led by divine call and desperation, Isabella has come to ask Maxima to be Juana’s adviser. Though Maxima’s immediate answer is no, it’s not long before she sees the opportunity to drag a less greedy, less religious, and less genocidal Spain kicking and screaming into the next (17th) century. The question is, is she really the woman to do it?

Director Philip Hays successfully navigates the sprawl of pastiche and irreverence in The Hunchback of Seville, balancing the inherent absurdity of many of the situations against the very serious anti-colonialist message of the piece as well as the real atrocities the play references. In less capable, less thoughtful hands, it could be jarring at best and tasteless at worst. Instead, the play’s most serious moments are allowed to breath, while the tension is allowed to break with well-timed humor. Across the board, the cast Hays has assembled displays a remarkable sense of tone, timing and delivery – and it all starts with the titular hunchback, played by Patricia Duran.

Samantha Jaramillo, Elizabeth Black, Patricia Duran and Rhett Martinez in The Hunchback of Seville.
Photo by Gentle Bear Photography
It’s a cliché to say that Duran disappears into her character, but she does. First, with her physicality, specifically her stooped posture, ungainly gait, and little vocalized exhales. She also gets an assist here from Costume Designer Leah Smith. Duran is costumed in, of course, a hump, and also thick black-rimmed glasses and a bland color palette, well contrasted with Smith’s designs for the other characters, from the worn rags that clothe Inocencia (Maxima’s new maid, played by a guileless Samantha Jaramillo), to Juana’s “baby leopard skins” and the decadent red gown of Queen Isabella.

In the same way that her physicality marks her, Duran’s Maxima is also distanced by her personality. Maxima is a bit gruff, and crusty. But something softer begins to emerge at the sudden return of Abdul Haseeb (Anthony August, whose conviction in one particular scene is chilling) and Maxima’s love, Talib Furozh (Dillon Dewitt). Talib and Maxima’s reunion injects a lot of heart and a surprisingly endearing love story into the proceedings (one that peaks with, of all things, a trigonometry-related duet).

Dewitt has one of the most challenging roles in this play as Talib Furozh. Talib is the “heretic mathematician,” banished to Hispaniola where he got a front-row seat to the atrocities committed there, leaving him haunted and traumatized. Dewitt is tasked with delivering some of the darkest, most serious of monologues, and it’s a challenge he proves to be well-prepared for. If there are two sides to this coin, with Dewitt taking the serious side, the other side probably belongs to Briana J. Resa, who plays Infanta Juana.

The historiographical jury has long had reason to doubt the supposed insanity of Infanta Juana, also known as Juana la Loca. In Smith’s writing and Resa’s hands, Infanta Juana is beautifully erratic, a privileged, overindulged brat. Resa’s selfie-taking, tantrum-throwing, people-eating gum-popper morphs from childish to menacing in the blink of an eye, an opportunity Resa seems to relish as she chews a bit of scenery to great effect.

The cast is well supported by the creative team. Scenic and Properties Designer Jodi Bobrovsky has created a set that is simple and sparse, yet incredibly functional. The highlights are the lovely walls, completely adorned with maps, and a large window, perfect for some shadowy behind-the-scenes action. Lighting Designer Greg Starbird makes good, judicious use of the spotlight at some key moments, and both Jonathan Harvey and John Peeples easily weave everything from an echo within the royal toilette to a water slosh into their sound designs.

If there are two things to be said about The Hunchback of Seville, they are as follows: One, see it. And two, think about it. Despite being set in the 16th century, the program doesn’t include quotes (which you should read) from Michele Bachmann and Stephen Colbert for nothing.

Performances continue at 8 p.m. Thursdays through Saturdays, April 1 and April 3, and 3 p.m. March 31 at the Alley Theatre, 615 Texas. For more information, call 832-463-0409 or visit mildredsumbrella.com. Pay-what-you-can; $25 suggested price.
KEEP THE HOUSTON PRESS FREE... Since we started the Houston Press, it has been defined as the free, independent voice of Houston, and we'd like to keep it that way. With local media under siege, it's more important than ever for us to rally support behind funding our local journalism. You can help by participating in our "I Support" program, allowing us to keep offering readers access to our incisive coverage of local news, food and culture with no paywalls.
Make a one-time donation today for as little as $1.