Jennifer Paredes and Melissa Molano in Stages Repertory Theatre’s production of The River Bride . Photo by Amitava Sarkar
Of all the things to find caught in a fisherman's net – aside from a nice haul of tuna, a message in a bottle or the occasional human skull – imagine finding a mystery man, well-dressed and looking for love. That’s what the Costa family find in Marisela Treviño Orta’s The River Bride, the “anchor” production of Stages Repertory Theatre’s Sin Muros: A Latinx Theatre Festival.

To experience The River Bride is to spend a few days with the Costa family: Sr. Costa, Sra. Costa and their two daughters. Their youngest, Belmira, is set to marry the most handsome man in the village, Duarte, who just happens to be her older sister Helena’s first love. It’s unclear how much Belmira loves Duarte, but it’s crystal that she’s looking for a way out of her tiny fishing village and in him, she sees an escape route. Both Belmira and Helena, however, are thrown for a loop when Sr. Costa and Duarte find a strange man caught in their fishing net just three days before the wedding.

I should mention here that there’s a local myth about dolphins who come ashore once a year in June to find a human mate. If they find their love and marry within three days, the dolphin becomes a man and stays on land. If not, he must return to the river to live alone as a dolphin for another year.

It’s worth noting this because it’s June. And the mystery man, Moises, quickly sets his sights on Helena and begins speed wooing. And he says he’s at home in the water. And always travels alone. And makes this trip every year. And has to leave in three days. So, yeah. Regardless, and despite Moises’s clear interest in Helena, Belmira finds herself drawn to him, setting the (literal) stage for an incredibly original and affecting night at the theater.

The River Bride is part of a cycle of plays, the others being Alcira and Wolf at the Door, that Orta describes as “grim Latinx fairy tales,” works that draw from Latinx folklore we may not be all that familiar with and the European traditions we’re intimately acquainted with. And, admittedly, it’s a little difficult not to think about “The Little Mermaid” when watching The River Bride. Mainly because it’s striking in retrospect just how much Hans Christian Andersen’s tale uses its supernatural elements to keep its audience an arms-length away. Jennifer Paredes and Luis Quintero in Stages Repertory Theatre’s production of The River Bride.
Photo by Amitava Sarkar
Unlike Andersen, Orta’s play doesn’t need a sea witch, nor any other evil supernatural being who wants to watch the world burn. Instead, The River Bride is populated with people acting like people, their imperfections and flaws achingly human and propelling the story forward. They’re selfish, passive, cowardly, desperate, uncertain and plagued with fear, and sometimes even their good intentions from yesterday are shown to have become the enabling behaviors of today. But there are no villains. Orta’s script is dark, but it’s not black and white. It is nuanced and well-crafted, and peppered with poetic lyricism, with lines such as “I was an ache as long as this river.” (No surprise given Orta’s background in poetry writing.) And luckily, the beauty of Orta’s words and the ideas she presents prove to be in capable hands with director Jerry Ruiz and his incredibly talented cast.

If Melissa Molano’s Belmira had a tagline, it would be her motto, “love is for the bold.” Unfortunately, Belmira’s idea of bold usually ends up leaving behind a victim, and that victim is usually her sister. Despite expertly playing Belmira as bratty, self-centered and demanding, Molano is never completely unlikable. Frustrating, but not unlikable. Maybe that’s because it’s easy to remember that asking for and then taking what you want is only one part of the equation. The other is the person who says yes or no. And Jennifer Paredes’s Helena just can’t seem to say no.

Helena, weighed down by duty and loyalty, long ago decided that some things just aren’t worth fighting for. But despite Paredes’s brave face and almost businesslike speech, it soon becomes clear that her Helena is frayed at the edges, her emotions leaking out the closer they get to Belmira and Duarte’s wedding. Following the appearance of Moises, Paredes gets a chance to play with the character, as she goes from heartbroken, to free, to panicked, and more.

Luis Quintero’s Moises is singularly focused on securing Helena as his bride, but there’s a palpable longing, and distress, undergirding his performance. The last corner of this love square is Adonis Bañuelos, who is in turns befuddled, suspicious, left out and, eventually, honest as Duarte.

And then there’s the still very much in love Sr. and Sra. Costa. Luis Galindo is quite the scene-stealer as Sr. Costa. He is passionate in his delivery and one monologue, in which he recounts a wonderful dream, is particularly captivating. Where Galindo is boisterous, Patricia Duran is quieter as Sra. Costa. Sra. Costa is strong and soothing in the way that mothers tend to be, and she’s mastered the classic “hmph” along with little motherly touches, like pulling Belmira’s off-the-shoulder sleeve firmly back in place on her shoulder. 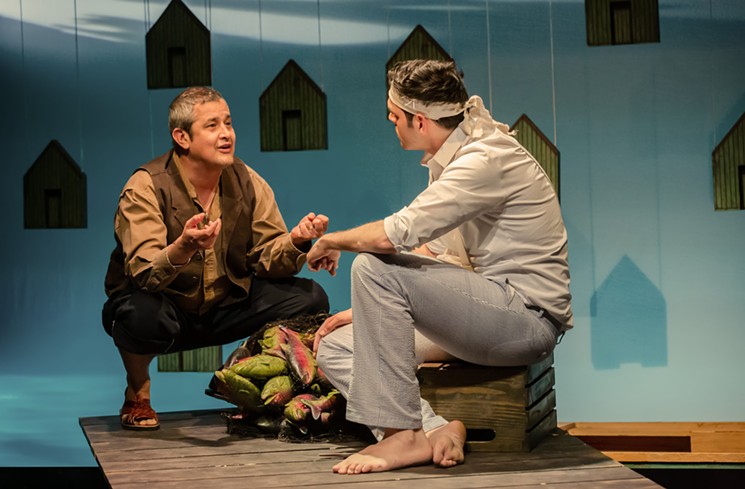 Luis Galindo and Luis Quintero in Stages Repertory Theatre’s production of The River Bride.
Photo by Amitava Sarkar
Steven C. Kemp’s set is evocative, the centerpiece a wooden pier and the frame of a house. Picture-sized homes hang in the back to represent the village, and a bed is off to one side to denote the Costas’ one-room house. Jodi Bobrovsky’s props are straightforward, like an oft-used apple crate. Against the backdrop is space for a simple wooden boat to move through, and room enough for Sr. Costa and Duarte to pull Moises from the river, his hand appearing in the net one of the play’s most memorable images.

The Amazon itself is ever-present surrounding the proceedings, both with the set’s otherworldly blue tint and Julian Mesri’s sound designs. The splashes of feet as they dip into the water, the dolphins swimming around the pier, and the cracks of thunder – coupled here with Lighting Designer Renée Brode’s purple lightning flashes – are all quite effective. Mesri even gets an assist from a little diegetic sound, the creaking planks of the pier. But most effective is the score played under some scenes and through several transitions, which add an element of something almost science fiction-like to the play. It successfully heightens the eeriness and unease of certain moments that won’t be spoiled here.

The costumes, by Tiffani Fuller Bonds, tell the story of the characters at first sight. Belmira’s colorful skirt and frills are girlish and flirty. Helena’s high-waisted pants and button-up more practical. The earthy tones on Sr. Costa and Duarte denote their connection to the earth through their jobs. And later, two very different wedding dresses (in style and texture) go even further in distinguishing the two sisters.

Though The River Bride is already a fairly brisk one-act, some scenes did feel a little rushed. Some lines and moments could have been allowed a little more room to breathe. (In particular, one scene pivotal to Helena’s growth after her sister’s wedding banquet.) But overall, Stages has captured lightning in a bottle or, more specifically, a little “once upon a time on the banks of the Amazon” magic right here in a little ‘ole Houston theater.

Performances continue at 7:30 p.m. Wednesdays and Thursdays, 8 p.m. Fridays and Saturdays, and 2:30 p.m. Saturdays and Sundays at Stages Repertory Theatre, 3201 Allen Parkway. Through February 10. For more information, call 713-527-0123 or visit stagestheatre.com. $25 to $65.
KEEP THE HOUSTON PRESS FREE... Since we started the Houston Press, it has been defined as the free, independent voice of Houston, and we'd like to keep it that way. With local media under siege, it's more important than ever for us to rally support behind funding our local journalism. You can help by participating in our "I Support" program, allowing us to keep offering readers access to our incisive coverage of local news, food and culture with no paywalls.
Make a one-time donation today for as little as $1.