Recovery Laid Bare in Stages' Water by the Spoonful 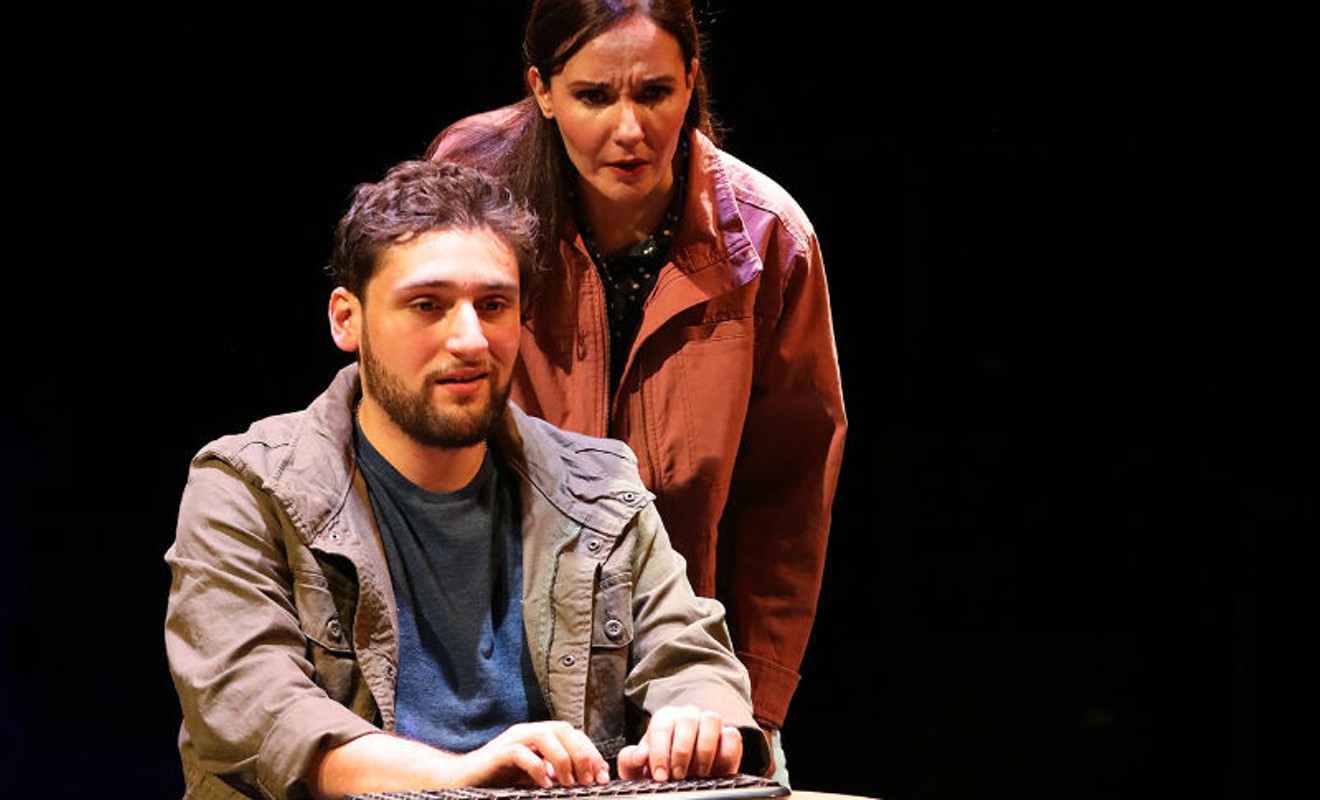 Something special is happening on Houston stages right now and some of it occurs at Stages at The Gordy. Photo by Amitava Sarkar, courtesy of Stages

You may be sick of hearing it, but I’m not sick of saying it: There’s something really special happening on Houston stages right now. Unless you’ve been living under a theater-less rock, you’ve probably heard mention of the fact that three Houston theater companies (Main Street Theater, Stages and Mildred’s Umbrella) are staging the three works in Quiara Alegría Hudes’s Elliot Trilogy. After viewing Elliot, A Soldier’s Fugue last week, this week, attention is turning to the second installment, the Pulitzer prize-winning Water by the Spoonful.

Water by the Spoonful begins with two seemingly disparate, but parallel stories. One centers on Elliot, an Iraq war veteran in his mid-20s, honorably discharged and settled back home in Philadelphia. To show for it, he has a leg injury that resulted in four surgeries, a job at a Subway 30 minutes from home so his friends won’t see him there, and an uncertain dream of being an actor. On top of that, he’s worried about his mother, who has cancer.

His only support is his cousin, Yaz, an adjunct music professor who’s getting a divorce. The second story follows a quartet of users on a recovery website for crack addicts, led by admin Odessa. With Odessa (username Haikumom) is Chutes and Ladders, a paper pusher whose addiction cost him his family; Orangutan, a Japanese-American woman 90 days clean in search of her birth mother; and newbie Fountainhead, who isn’t ready to admit he’s got a problem.

These two seemingly disparate threads run parallel to each other throughout the first of two acts and intersect before intermission. And it’s worth noting that the way they intersect is quite clever and unexpected. Hudes’s skill at crafting this story can’t be overlooked, but it’s the profound sense of empathy she’s brought to the table that makes this play most memorable. And Stages honors Hudes’s deeply affecting drama with a production that’s damn near perfect.

Damn near because of a couple of line miscues, noticeable enough to warrant a mention but, given the strength of the production overall, will be forgiven. Director Jerry Ruiz displays a masterful sense of space and skill in staging, and a seemingly intuitive ability to nurture the play’s stop-and-go coming together of two families. He and the cast deserve a lot of credit for fostering such connection between these characters, a feat considering four of them spend the bulk of the play talking toward and away from each other through machines, looking forward and around, pacing, swiveling, or reading a newspaper while interacting.

Though truly an ensemble piece, Elliot, played by Gabriel Regojo, is the common denominator of the trilogy, and the messy, frantically beating heart of the show. Regojo embodies perfectly Elliot’s unpredictable, restless energy and righteous anger. Opposite him, Patricia Duran as Yaz walks the delicately fine line of being the family’s rock, stable and successful, while struggling with her own guilt and anxiety about how she fits into the world.

As Odessa, Xóchitl Romero is a soothing presence, no-nonsense but fair, and so earnest in her mission. Odessa is the glue that holds her motley little group together, and they are quite a lively bunch to counsel, support and referee.

Jason E. Carmichael is quick with a comeback and a bit of a dweeb with a tight grip on control as Chutes and Ladders. He’s funny, vulnerable, and shares excellent chemistry with Hannah Lee’s Orangutan, which is on display when they are tag-teaming Fountainhead when he first enters the chat and later, as they make their awkward first steps toward an offline friendship. Lee is the picture of neediness, an undercurrent of anxiety growing stronger along with her desperation for real human connection.

The nod to Ayn Rand in the screen name Fountainhead tells you just about everything you need to know about Justin Doran’s character. (Though if you need a hint, Google objectivism.) Doran can deliver quite the smug monologue, and his resistance turned grudging assistance is equally affecting.

Water by the Spoonful is the kind of play that can live or die by its staging, and set designer Inseung Park has envisioned the perfect playground for Ruiz. It’s clean, sleek and sharp, with clear, naturally defined spaces that flow together beautifully as a whole and an eye-catching collection of graffitied windows arching overhead. Despite some cracked sidewalks and sporadically sprouting weeds, this Constructivist concrete jungle, minimalist and economic in design, morphs easily from Philly apartment to Puerto Rican paradise, Japanese train station to IRS office, relying on nothing more than the dialogue and Jodi Bobrovsky’s suggestive, equally efficient prop designs.

It should be said that the set goes a long way in evoking cyberspace, too, with much credit going to Sara Maines’s lighting designs. Maines’s use of unforgiving white spotlights, with other parts of the stage in black, shadowy darkness, hints at the spaceless recesses of the internet, while a blue tinge adds a coldness to the space, warmed up by the bright spots of humanity that inhabit it. Maines also works in close concert with sound designer Julian Mesri to create the play’s cyberspace chats. They’re a two-man band of sorts, hitting every note or, in this case, every log-on, log-off cue.

Though the second part of a trilogy, it's worth noting that Water by the Spoonful (like each of the three plays in the series) can easily be viewed as a standalone. But viewing Elliot, A Soldier's Fugue first will certainly add an extra depth and appreciation to the viewing experience, particularly to the ghost that haunts Elliot, the Arabic phrase he says and the green light that illuminates him. (Luckily, there’s time still to see it.)

The beauty of Water by the Spoonful is in its compassion, in its tender portrayal of survival and the spoonfuls we sometimes have to rely on to carry us from one second, one hour, one day to the next. And it’s hard to imagine a more beautiful production than the one currently running over at The Gordy.

Performances continue at 7:30 p.m. Wednesdays and Thursdays, 8 p.m. Fridays and Saturdays and 2:30 p.m. Saturdays and Sundays on the Lester and Sue Smith Stage of The Gordy, 800 Rosine. Through February 23. For more information, call 713-527-0123 or visit stageshouston.com. $25 to $65.
KEEP THE HOUSTON PRESS FREE... Since we started the Houston Press, it has been defined as the free, independent voice of Houston, and we'd like to keep it that way. With local media under siege, it's more important than ever for us to rally support behind funding our local journalism. You can help by participating in our "I Support" program, allowing us to keep offering readers access to our incisive coverage of local news, food and culture with no paywalls.
Make a one-time donation today for as little as $1.