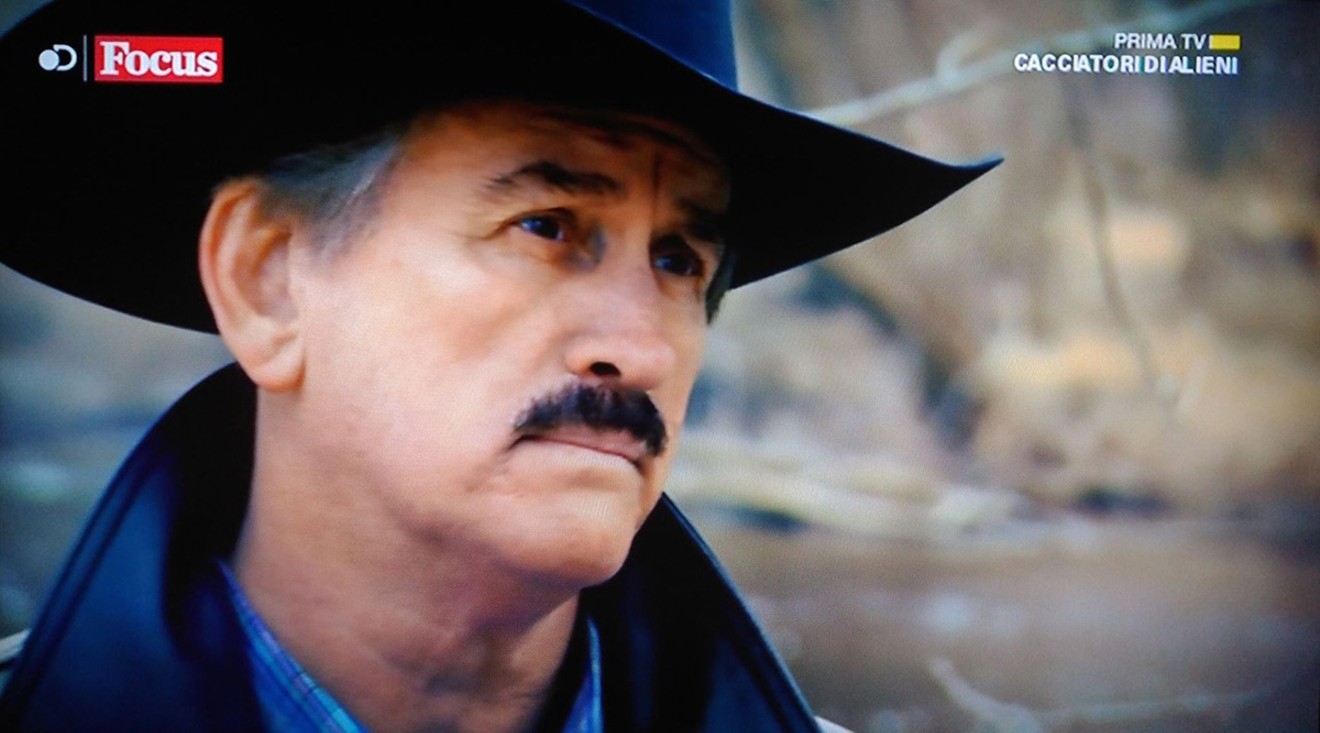 Alien Hunter Derrel Sims has made it his mission to frustrate and defeat the malevolent alien agenda, whatever that may be. Screengrab from Focus TV's Cacciatori di alieni, courtesy of Derrel Sims
Alien Hunter Derrel Sims tells us that, if you've been kidnapped by aliens, chances are one of your family members has also been snatched. "You're not special or unique; none of this weird stuff. They're interested in your lineage," he explains.

Sims says that as a child he was abducted by an alien in Midland and had a later, more violent encounter at the age of 17. He also says that years later his own son had been taken from their ranch near Huffman. He describes himself as the world’s leading expert on alien abductions and has since made it his life's work to frustrate and defeat what he terms a malevolent alien agenda.

He'll share information culled from more than 40 years of investigations at the inaugural Sky Dancer Native UFO Conference, where he'll introduce fascinating statistics (45 percent of abductees are of Native American, Irish, English or Scottish descent), and deliver a keynote presentation, "Physical Evidence of the Alien and Where Are They Now?"

The conference, which is being presented through the prism of the Native American perspective, brings fresh insight to this mysterious subject with presenters from the Cherokee, Zuni Pueblo, Navajo and Apache Nations. Sims describes himself as "part blood, not full blood" and will be speaking from the Cherokee point of view. Topics include paranormal tribal histories, unexplained phenomena and extraterrestrial life.

Other speakers include Clifford Mahooty, a Zuni Pueblo leader and Kachina priest; and Greg Valdez, son of a New Mexico state trooper and author of Dulce Base The Truth and Evidence From the Case Files of Gabe Valdez, a book that delves into cattle mutilations.

"The whole idea is fun and information. I don’t mind telling you, you better be prepared. They’re going to tell you things you haven’t heard before," says Sims, adding that a segment by Stanley Milford and Jonathan "Redbird" Dover just might be too frightening for some. 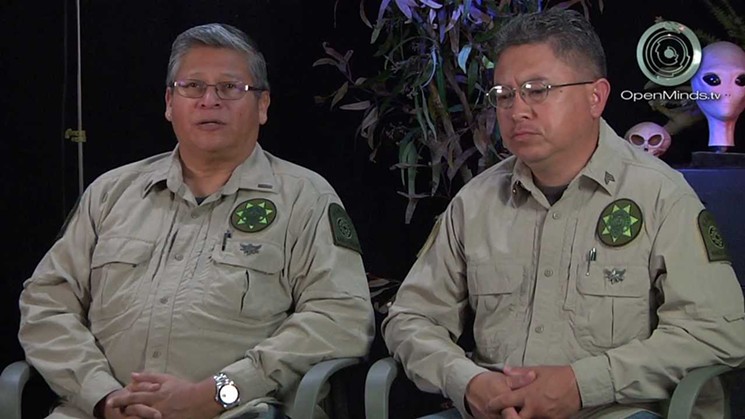 Stanley Milford and Jonathan "Redbird" Dover will present a lecture titled, "Bigfoot, UFOs, Paranormal Events, and Navajo Witchcraft."
Screengrab from video by OpenMindsTV/YouTube.com
"More importantly, [Milford and Dover] are two cops, ex-cops. Their job was to investigate paranormal activities in the Navajo nation. They’re going to be showing stuff on film. One part is a little bit scary; they’re going to be talking about the skinwalkers," says Sims, about the yee naaldooshii, believed to be parricidal evil witches who can transform into any animal at will. "Native Americans can leave the room [if they want]; it is absolutely horrific. These are all police cases they’re going to be showing you."

While Sims is convinced that the alien agenda is malevolent — "I was taken against my will and I don't like that" — he understands that some victims have a more benign outlook, and labels them contactees.

"My general thought after doing this work for more than 40 years and literally 2,000 cases worldwide is that they're not benevolent. I’ve conducted 25 surgical interventions on people who have had small devices installed on them, some people call them alien implants, some of the devices turned out to be extraterrestrial," says Sims. "For me, coming from a military police background and private investigator in the State of Texas for 40 years, and two years in the CIA in covert operations during the Vietnam War, I come from a strong investigative background. I put my police hat on.

"Are they benevolent? It depends on the program they’re running on you. Some events are benign, others are not. My point is whenever I've investigated a case of kidnapping, I never had a parent say, 'Well some kidnappers are good.'

"Whenever you come after my children, we have a serious, serious problem," adds Sims.

Both Sims and Mahooty have been tapped to speak at May's Contact in the Desert in Indian Wells, California — the world's largest UFO conference — where discussions include whether an interstellar object hurtling through space is really an alien reconnaissance expedition.

Sky Dancer, which is produced by Deborah Burns, includes daylong vendor exhibits. And, if you've been looking to purchase a knife, this is the place. Seating is limited for some of the presentations.

Sky Dancer Native UFO Conference is scheduled for 10 a.m.-10 p.m. January 19, Holiday Inn Houston Intercontinental Airport Hotel, 15222 John F. Kennedy Boulevard. For information, visit skydancerufocon.com, $20 to $40.
KEEP THE HOUSTON PRESS FREE... Since we started the Houston Press, it has been defined as the free, independent voice of Houston, and we'd like to keep it that way. With local media under siege, it's more important than ever for us to rally support behind funding our local journalism. You can help by participating in our "I Support" program, allowing us to keep offering readers access to our incisive coverage of local news, food and culture with no paywalls.
Make a one-time donation today for as little as $1.