Editor's Note 5 p.m. 02.28.20: AURA: Haunted at Moores Opera House has been rescheduled for Thursday, March 5. The program had to be postponed because of the major city water main break which closed the University of Houston campus until Saturday.

It's here – rodeo season is upon us. We’ve got just the thing for you if you’re ready to don your cowboy hat and boots, but if you’re not, we’ve got you covered too. From jazz and chamber music to gaming and everyone’s favorite meal (brunch), we’re sure we’ve got something you’ll want to do to keep you busy this weekend.

It’s a tale that most of us can easily recognize. A young princess is cursed by a wronged fairy, and another fairy steps in to change the curse from death to 100 years’ sleep, at which point the princess would be awakened by true love’s kiss. It’s the story of The Sleeping Beauty, and back in 1990, Ben Stevenson premiered his take on the fairy tale, building off Marius Petipa and Pyotr Ilyich Tchaikovsky’s 1890 production and those that followed to create a work that the Houston Ballet still performs to this day – much to the continued joy of Houstonians. Because of its classic choreography, romantic score, and gorgeous sets and costumes (designed by Desmond Heeley and with an original price tag of about $757,000), it’s kind of a no-brainer that when Houston Ballet brings Stevenson’s The Sleeping Beauty back to the Wortham stage, it's one of our best bets. After all, as Stevenson once said, “We all need a certain amount of beauty and love in our lives.” And for a different take on who to root for in this story, read our preview. The AURA Contemporary Ensemble will present a hybrid chamber music-theater program when they perform Haunted this Friday.
Photo by Pin Lim
Note: This even has been postponed because of the city's massive water main break.
If you’re not familiar with AURA Contemporary Ensemble, you’ve been missing out on all kinds of innovative collaborations and programs – not to mention just good music played by highly skilled musicians – coming out of the Moores School of Music at the University of Houston. This Friday, however, you get a chance to see what AURA does best when they perform Haunted, a chamber music-theater hybrid built around a short story by Brendan Stephens, a current student in the University of Houston’s PhD program. In between the scenes of the story – about a girl’s death and the effect it has on her friend, her sister, and her boyfriend (all portrayed by actors from Texas Southern University) – AURA will provide a musical commentary. Two of the four works on the program are from Grammy-nominated composers (Derek Bermel and Christopher Cerrone) and the other two are world premiere pieces (one from Gilberto Hernan Campa and one from recent UH grad Kyle Rivera). 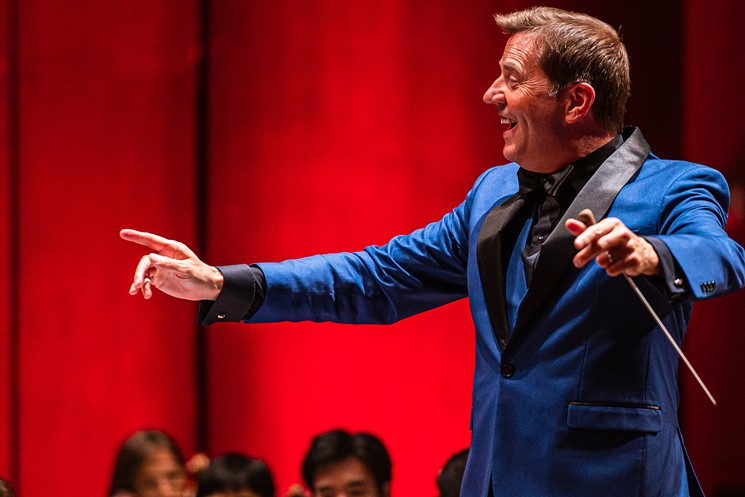 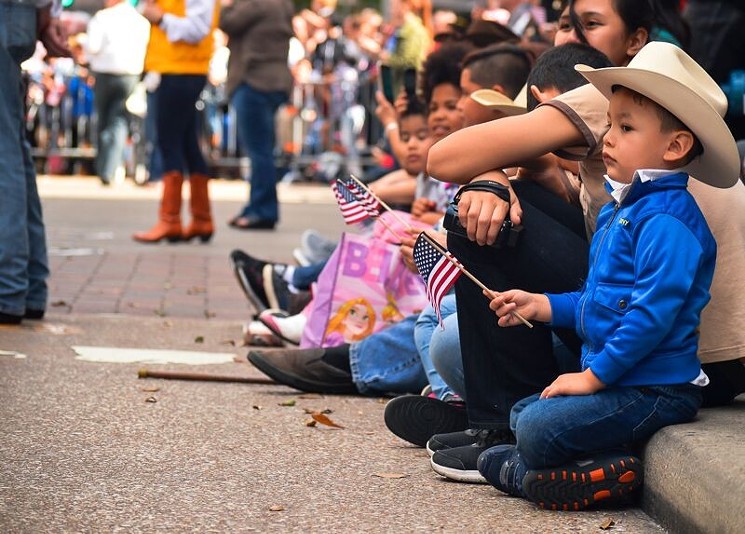 Be ready to arrive early to nab the best spot at the Downtown Rodeo Parade.
Photo by Mohammad Mia
Yes, it’s that time of year again, time for the Houston Livestock Show and Rodeo. With an estimated 2.5 million people predicted to swing by, we’re willing to bet that you, dear reader, will be jamming at one of the concerts, indulging in some fried goodness, or petting a goat very soon. (We’ve already got you covered if you want a sneak peek at what’s to come.) Go Texan Day is Friday, February 28, but our best pre-rodeo bet this week is the Downtown Rodeo Parade on Saturday. This year will feature past and present Rodeo scholarship recipients serving as grand marshals and to mention the horses and floats we’ve come to love and expect. Remember, the early bird gets the worm and the early arriver gets the best spot. And RodeoHouston has already told us the best viewing spots will be on Louisiana, from Bell to Lamar, Lamar, and from Louisiana to Smith. The Houston Outlaws make their first homestand this weekend at Revention Music Center.
Photo by Ben Pursell
Admittedly, as we mosey into Week 4 of the Overwatch League, the Houston Outlaws haven’t been having the best time – chock it up to a couple of losses, missing luggage, and the flu. But the Outlaws did push the Boston Uprising into what is now the longest regular-season match in Overwatch League history, and there’s time still to turn things around. More importantly, Houston eSports fans get to experience the Houston Outlaws Inaugural Homestand this weekend at Revention Music Center. Nine teams, including the Outlaws, and six match-ups, including a match between the No. 1 ranked Philadelphia Fusion and the aforementioned Boston Uprising on Sunday at 1 p.m., in a festival-like atmosphere that promises an experience that any eSports fan won’t want to miss. Single day tickets and weekend passes are still available.

The Houston Outlaws inaugural homestand is scheduled from February 29 and March 1 at Revention Music Center, 520 Texas. For more information, visit outlaws.overwatchleague.com. $50 to $240.

Da Camera will bring the Vijay Iyer Sextet to town to perform music from their 2017 album, Far From Over.
Photo by Stacy Kimball
Vijay Iyer is a jazz pianist and a Harvard professor. He’s a man who studied physics and math before making music his career. And if the album he released in 2017 is any indication, he can also see the future. NPR said the album, Far From Over, created for a jazz sextet, “reflects Iyer's belief that jazz is ‘a category that keeps shifting.’” All which means that when the Vijay Iyer Sextet (featuring Iyer on piano; Graham Haynes on cornet, flugelhorn and electronics; Steve Lehman on alto saxophone; Mark Shim on tenor saxophone; Stephan Crump on double bass; and Jeremy Dutton on drums) comes to town, courtesy of Da Camera, you’ll not only be hearing from an album Rolling Stone called the most exciting jazz album of 2017, you’ll be getting a glimpse of the future, as Rolling Stone added, "If you’re looking for the shape of jazz to come, here it is." AIDS Walk Houston is scheduled for 12 p.m. March 1 at Sam Houston Park, 1000 Bagby. For more information, visit aidshelp.org. Participation is free, and donations may be made online or in person at the walk. Houston BrunchFest is scheduled for 1 p.m. at Midtown Park, 2811 Travis. For more information, visit brunch-so-hard.com. $64 to $105.
KEEP THE HOUSTON PRESS FREE... Since we started the Houston Press, it has been defined as the free, independent voice of Houston, and we'd like to keep it that way. With local media under siege, it's more important than ever for us to rally support behind funding our local journalism. You can help by participating in our "I Support" program, allowing us to keep offering readers access to our incisive coverage of local news, food and culture with no paywalls.
Make a one-time donation today for as little as $1.