10 Best Bets This Weekend in Houston: Star Wars in Concert and at Rice Owls 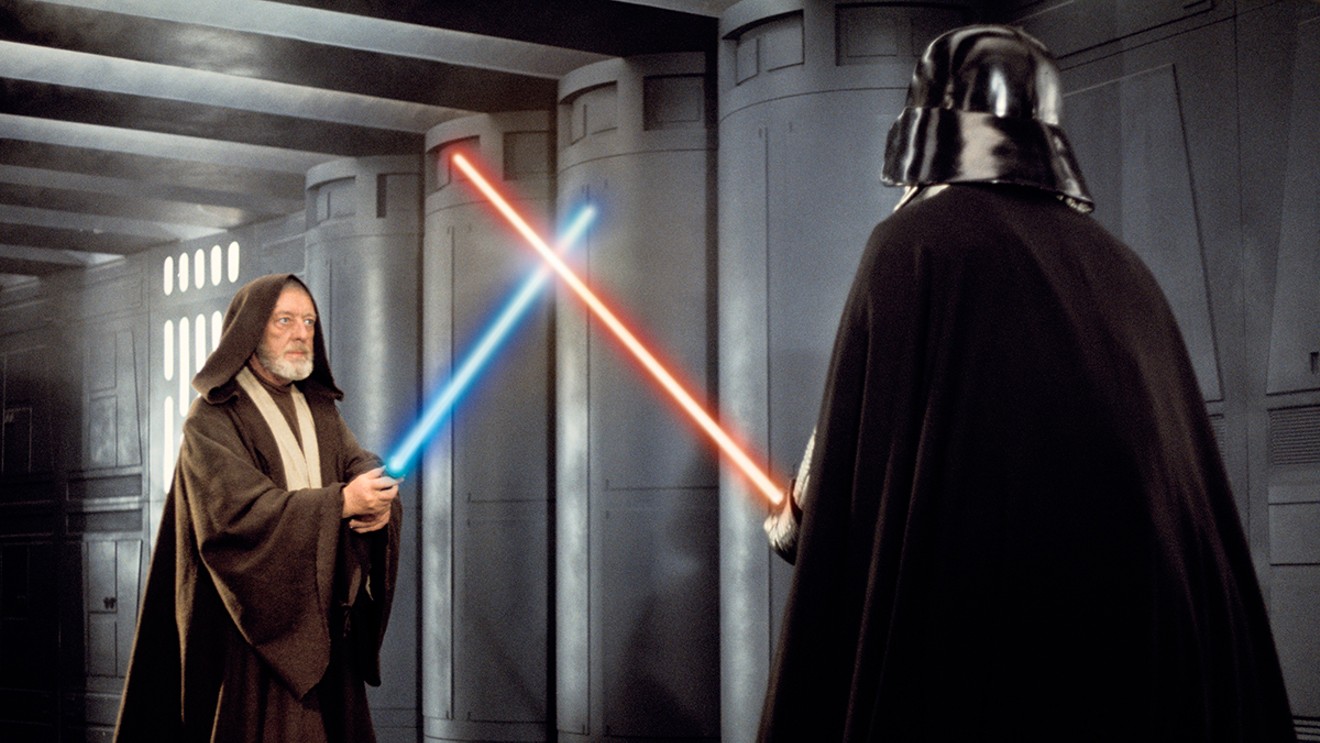 The Houston Symphony performs John Williams' epic score from Star Wars Episode IV: A New Hope during a screening and live concert, March 22-24. © 2018 Photo by and TM Lucasfilm Ltd., All Rights Reserved © Disney
We're just months away from celebrating the 50th anniversary of the Apollo 11 lunar landing, though we're never too far from that final frontier here in Space City. This weekend brings a Star Wars themed concert and screening with Houston Symphony, dueling lightsabers at Rice Owls, and a sci-fi dance of retro-futuristic dystopias with Open Dance Project. Even drummer Mark Guiliana fills in those compositional "black holes" in Da Camera's Space Heroes. Get ready for another great weekend: Five, four, three, two, one ... blast-off! 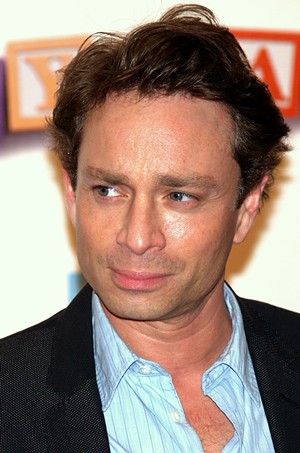 Chris Kattan brings his stand-up to Joke Joint.
Photo by David Shankbone via CC 3.0
What are your Chris Kattan LOL moments? Doug Butabi from A Night at the Roxbury, exotic dancer Mango, or the banana-fueled humping monkey man Mr. Peepers? Brilliant during his eight years as a cast member for SNL, Kattan solidified his spot as a comedic superstar with Hollywood turns in Corky Romano, Undercover Brother, Sharknado 5 and the Adam Sandler vehicles Hotel Transylvania and The Ridiculous 6. But there's so much more to this funnyman, which we'll see when his popular stand-up act touches down in H-Town.

Tradition went out the window two years ago at the Houston Ballet when choreographer Justin Peck let the entire corps de ballet steal the limelight from the principals. He follows up the Year of the Rabbit with the world premiere of Reflections, a study in symmetry, balance and space set to a two piano score by close collaborator Sufjan Stevens. Also on the program for Premieres are the ballet's first outing for Aszure Barton's Come In, a contemporary work for 13 male dancers; and Jirí Kylián's Dream Time, danced to a score by Japanese composer Toru Takemitsu.


The lines become blurred between sound, dance, design and space in this next offering from Asia Society Texas Center, and that's a good thing. Moving Mountains through the Clouds is set to music by the Transitory Sound and Movement Collective and features dance artists Nao Kusuzaki, Jennifer Mabus and Evelyn Toh in response to the Yoshio Taniguchi-designed architecture of the space. The result? Audience members will find themselves immersed in a living sonic sculpture.

The brilliance of George Lucas remains unchallenged, but Star Wars Episode IV: A New Hope just wouldn't have been the same without the moving score of John Williams. Jump inside the Millennium Falcon and return to where it all began when Luke Skywalker leaves his home planet, is forced to battle the evil empire, and discovers the ways of the Force when Houston Symphony plays the score live during a screening of this epic space opera. Star Wars: A New Hope — In Concert is led by Principal POPS Conductor Steven Reineke. This presentation has been licensed by Disney Concerts in association with 20th Century Fox, Lucasfilm Ltd., and Warner/Chappell Music.

Fast forward to 2151 and step inside an Orwellian universe where somebody is always watching and human connection is forbidden, as two young lovers struggle with their desire for intimacy. Choreographer Annie Arnoult is collaborating with Open Dance Project to create Panopticon, a world  of retro-futuristic dystopias that builds on Open Dance's ongoing foray into sci-fi. Audience members will be asked to stand and walk during this hour long immersive production; the performance is wheelchair accessible.

Enjoy Star Wars character appearances, lightsaber giveaways and Rice Baseball Star Wars poster giveaways for the first 200 fans when the Rice Owls go up against UTSA.
Photo by Ari Bard
Let's get ready to rumble during Star Wars Night at Rice Owls this Friday night, with character appearances and a chance to score some awesome merch. The first 200 fans will go home with both a free lightsaber and an exclusive Rice Baseball Star Wars poster. Plus it's the opener for a three game Texas battle against the UTSA Roadrunners, though we know the Force is with the Owls. Come back Saturday during Hometown Heroes Day with American flag themed hats and touch-a-truck, then return Sunday for the second annual Jewish Community Day.

Some might call diamonds their best friend but we say that the Julia C. Hester House, with its valuable programs and services, has been best friend to the Fifth Ward for the past 75 years. To celebrate, Commissioner Rodney Ellis' office (Harris County Precinct One) is partnering up with Discovery Green — the first time the park has expanded its programming outside its downtown location — turning this 75th Anniversary into a community jubilee festival. Don't miss the noontime performance by the Las Vegas-based troupe, Cirque Zuma Zuma, bringing a family-friendly, high-energy show with pulsing African music and talented acrobats from African nations.

Savannah Blue has always been a poet at heart, but when she discovered the competitive nature of poetry slams, she never looked back. Under the umbrella of her nonprofit arts organization Savannah Blue Arts and Outreach, this advocate for performance poetry has brought us the Houston Poetry Slam, Bayou City Poetry Slam, Black Lines Poetry, and a youth program. For this weekend's 2nd Annual Women on the Bayou, expect to hear from fierce and fabulous Austin imports Glori B, Teresa Johnson and Addy Lugo, Seattle's Rio Chanae, Newark's RADI, and Big D's Gabrielle Edwards, among others.

Can there be black holes in music? Drummer Mark Guiliana thinks so, and by removing the guitarist or regular keyboardist from his concerts, he's discovered that there's room to explore in that space within the music. Joining Guiliana in Space Heroes are bassist Chris Morrissey and saxophonists Jason Rigby and Mike Lewis. Guiliana already has been named a Critics Poll Rising Star by DownBeat, and two years ago was named Best Jazz Drummer in the Modern Drummer Readers Poll. See what happens in this original composition written for two horns, designed to let the personalities of these musicians shine, in this presentation by Da Camera.

Walk, bike, two step or hop on board the Pedal Party bus, but leave those automobiles home in this celebration of alternative transportation. Cigna Sunday Streets kicks off the spring 2019 season this month, heading to the popular 19th Street between North Shepherd and Yale in the Heights. Part bike tour, part walking tour, and presented by the Mayor's Office of Special Events, this open air event is designed to promote outdoorsy activities and healthy lifestyles, with a heaping helping of community spirit. Then mark your calendars for the Midtown route on April 28 and an Alief route on May 19.

Cigna Sunday Streets are scheduled for March 24, April 28 and  May 19 from noon to 4 p.m. Sunday. For information and updated route maps, visit houstontx.gov/specialevents/sundaystreets.html. Free.

Technically not on the weekend, but who couldn't resist the popular Inprint Margarett Root Brown Reading Series, where books are cool and hearing from popular authors is even cooler. It's a two-for-one this Monday evening with readings and interviews with poets Carmen Giménez Smith (Milk and Filth, Cruel Futures) and Fady Joudah (Footnotes in the Order of Disappearance: Poems). The reading is presented in collaboration with Tintero Projects and memoirist-performance poet-actress-educator Jasminne Mendez is on point for the on-stage interviews.

The event is scheduled for March 25 at 7:30 p.m. Monday at Rice University, Stude Concert Hall, 6100 Main. For information, call 713-521-2026 or visit inprinthouston.org. $5. Purchase books from Inprint's virtual store on Brazos Bookstore's website here.
KEEP THE HOUSTON PRESS FREE... Since we started the Houston Press, it has been defined as the free, independent voice of Houston, and we'd like to keep it that way. With local media under siege, it's more important than ever for us to rally support behind funding our local journalism. You can help by participating in our "I Support" program, allowing us to keep offering readers access to our incisive coverage of local news, food and culture with no paywalls.
Make a one-time donation today for as little as $1.