The 12th Annual Wiener Dog Races are this Saturday at Sam Houston Race Park. Photo by Jack Coady, Coady Photography
Spring has sprung and we've got all sorts of great reasons to get out of the house this weekend in Houston. Memorial Park plays host to the Bayou City Art Festival, a walkable feast for the eyes; the Houston Polo Club starts back up with the new season; and there's a daylong tribute to Selena this Sunday. Plus we've got a Latino film festival, comedy from Jeff Dunham and also The Tenderloins, and music from both rising stars and top shelf headliners. Keep reading for the scoop on where to go and what to do.

Expect tequila, visiting filmmakers, shorts about social injustice, and some of the most caliente indie flicks from the United States, Latin America, Spain and Portugal during this weekend's 4th Annual Houston Latino Film Festival. Joel Novoa (God's Slave, CW's Arrow) is presenting a Saturday workshop on directing, while cinematographer Orlando Briones will demonstrate how to use the legendary RED Digital Cinema camera this Sunday. Feature films cover myriad subjects, including the Mexican cartel, the race against time, vineyard workers, and how an odd couple is formed after a tragic accident.

Sculptor Keith Bradley.
Photo by Katya Horner
One look at the colorful paintings by Julio C. Garcia and it's easy to see why he was named featured artist during the upcoming Bayou City Art Festival Memorial Park, presented by Art Colony Association, Inc. This Florida-based artist uses the bright, saturated colors of his childhood in Mexico, blending in some Cubist elements to create human forms that are out of this world. Come shop from hundreds of established and emerging artists and find that perfect piece for home or office.

There just might not be anything funnier than seeing wiggly dachshunds, with their short little legs, running for the finish line at Sam Houston Race Park. The 12th Annual Wiener Dog Races return to the track this Saturday, taking off from a miniature starting gate, with eight heats of eight racers each. First and second place finishers earn $200 and $100 for their humans, plus every wiener dog gets its picture in the program. This also is the last day for live racing until April 12th, so don't miss this last hurrah for live thoroughbred racing. Gates open at 10:30 a.m. for simulcast and at 5:30 p.m. for live racing.

'Round here, the accordion has experienced a resurgence in popularity, thanks in no small part to Polish Pete and the Polka Hardly Know Her Band. One listen to their tribute to José Altuve and it's earworm city for the rest of the day. Now everybody wants to get in on the squeezebox action and emerging accordionists from all over Texas are competing in The Big Squeeze 2019, a statewide youth accordion contest with a big finale in May. The Texas tour includes two stops in Houston, where musicians will perform two songs that will be videotaped by Texas Folklife.

Performances/auditions are scheduled for March 30 through March 31 at 2-4 p.m. Saturday (Jax Bar) and 2-4 p.m. Sunday (MECA) at Jax Bar & Grill, 1613 Shepherd and Multicultural Education and Counseling through the Arts, 1900 Kane. For information, visit facebook.com/texasfolklife. Free.


"Hits one here, hits one there, hits everywhere ... Let’s all cheer Altuve." — Polish Pete and the Polka Hardly Know Her Band

Ventriloquist Jeff Dunham has so many alter egos, it's hard to know where he ends and his dummies begin. We've all got our favorites: boggle-eyed skeleton Achmed, frenzied sidekick Peanut, curmudgeon without a filter Walter, José Jalapeño on a Stick, and country boy Bubba J. Now the Texas native and YouTube superstar is out with a new tour and Jeff Dunham: Passively Aggressive touches down in Houston this Sunday.

Paging Cranjis, Cranjis McBasketball. Nobody? Cranjis might not be in da house, but the pranksters from TruTV's Impractical Jokers will be when The Tenderloins Comedy Troupe brings The Cranjis McBasketball World Comedy Tour to Smart Financial Center. The real challenge, of course, is to see how far Joe Gatto, James Murray, Brian Quinn and Sal Vulcano can go without breaking character and cracking a smile. Expect all new material, some stand-up, and screenings of their secret hidden camera videos where they coerce each other into doing public pranks. 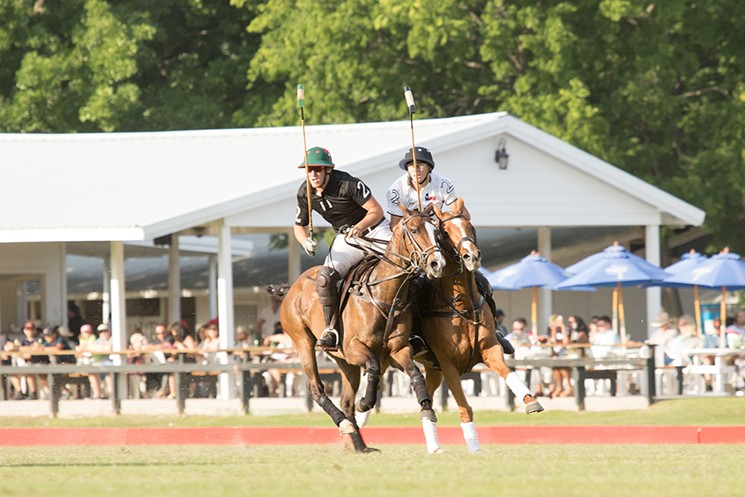 Wondering what to wear to the Houston Polo Club? For men collar shirts are required; pair with nice shorts or casual pants. For the ladies, sundresses, skirts or capri pants are in fashion; heels are not.
Photo by Kaylee Wroe
On your mark, get set, put on something smartly casual, then head over to the Houston Polo Club because the spring season kicks off this Sunday. The Legation Cup presented by Andrea Clouet pits the United States against England, an exciting cross-pond match-up where winner takes the trophy and gets bragging rights. Leave the high heels at home because there is a champagne divot stomp at half time, plus a chance to meet the players afterwards. Upscale concessions are handled by Ruth's Chris Steak House and include champagne, polo peach tea, and buckets of beer.

We will always love you, Selena, and almost 25 years after your tragic death our hearts still burn passionately for your young soul. East End Studio Gallery pays tribute to the Queen of Tejano, Selena Quintanilla-Perez, at this weekend's Siempre Selena Loteria & Market. Expect to laugh a little, remember her sparkly personality, and do some singing and dancing to the music of La Reina de Tejano. It's a daylong affair with an artisan market from 1 to 8 p.m., loteria from 3 to 7 p.m., headliner Jocelyn Rodriguez channeling her inner Selena at 4:30 p.m., and a raffle giveaway at 7 p.m. Bidi bidi bom bom.

The inaugural Kinder HSPVA Lunch Concert Series kicks off at Discovery Green this Wednesday.
Photo by Katya Horner
There's no need for a frowny face just because the weekend is about to come to a close. Next week holds much promise for arts and culture aficionados.

At the intersection of music and art, and to celebrate a rare showing of Cy Twombly's monumental painting, The Treatise on the Veil, Da Camera has planned a unique musical event at The Menil Collection in The Veil of Orpheus: Cy Twombly and Music. We're getting a sneak peek at excerpts from Eurydice, a new opera by rising star composer and MacArthur fellow Matthew Aucoin, before it premieres at New York's Metropolitan Opera. Countertenor Anthony Roth Costanzo and baritone Mark Diamond make their Da Camera debuts in this program that includes Pierre Henry's The Veil of Orpheus, Monteverdi's Possente spirto (from Orfeo), and Harrison Birtwistle's Orpheus Elegies.

Turn office lunch from drab to fab with these lunchtime concerts at Discovery Green, courtesy of the up and coming talents at Kinder HSPVA. The inaugural Kinder HSPVA Lunch Concert Series kicks off this Wednesday with a different focus each week: April 3 is Jazz, April 10 is winds and percussion, April 17 is musical theater, April 24 is strings, and May 1 is mariachi. Pack a picnic lunch, grab a box lunch from The Lake house, or reserve your seat on The Grove's tree-lined patio.

Performances are scheduled for April 3 through May 1 at 11:30 a.m. to 1 p.m. Wednesdays at Discovery Green, 1500 McKinney. For information, visit discoverygreen.com. Free admission.
KEEP THE HOUSTON PRESS FREE... Since we started the Houston Press, it has been defined as the free, independent voice of Houston, and we'd like to keep it that way. With local media under siege, it's more important than ever for us to rally support behind funding our local journalism. You can help by participating in our "I Support" program, allowing us to keep offering readers access to our incisive coverage of local news, food and culture with no paywalls.
Make a one-time donation today for as little as $1.