10 Best Bets This Weekend in Houston: Mother of Dragons, Fringe and AsiaFest 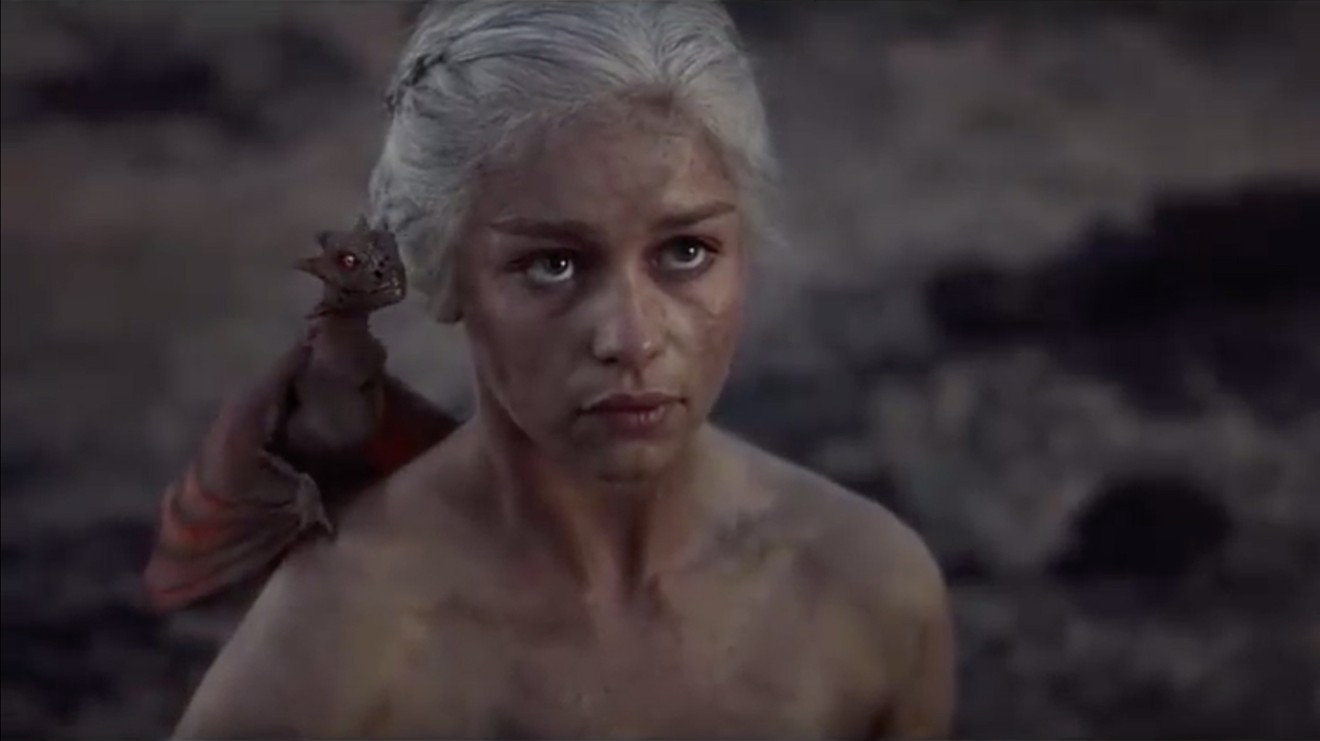 Emilia Clarke joins other celebrities at this weekend's Comicpalooza, May 10-12 at George R. Brown Convention Center. Screenshot from video by Game of Scenes/Youtube.com
It's time to get your cosplay on because Emilia Clarke, Mother of Dragons, is headlining at Comicpalooza this weekend. There's tons more fun to be had outside GRB so our advice is for some strategic planning with your datebook: Brett Cullen is returning to UH, the 'Stros are trying to maintain their lead in the AL West, Apollo and Fringe are at MATCH, Da Camera and Mercury are at Wortham, Market Square Park kicks off summer concerts and we've got AsiaFest on Saturday. And if you just can't get enough of Game of Thrones, head over to Station Theater to watch the "bad man fly."

[Editor's note:] Due to weather conditions, AsiaFest has been rescheduled for the weekend of June 29-30 and the Summer Concert Series at Market Square Park is rescheduled for June 28.

It's always bittersweet when somebody breaks out of the local theater scene and makes it to Hollywood or Broadway; we hate losing good talent but never want to thwart a star's trajectory. Now two Texans are coming back to where it all began to workshop a new play at University of Houston. Sally Mayes wrote the script and stars in Contradiction of the Southern Soul, about an actress returning to east Texas after a family tragedy. Mayes' memory play with music references her early years growing up in Livingston, as well as stints on Broadway in Steel Magnolias and Urban Cowboy. UH alumnus Brett Cullen — emerging from the darkness after just wrapping production of Joker with Robert DeNiro and Joaquin Phoenix — is directing the world premiere.

The guest artist workshop performance is scheduled for May 9 through May 12 at 8 p.m. Thursday through Saturday and 2 p.m. Sunday at University of Houston, Jose Quintero Theatre, 3351 Cullen Boulevard. For information, call 713-743-3388 or visit uh.edu/kgmca/theatre-and-dance/get-tickets/workshop. $10 to $20.

The Lone Star State is embroiled in an epic battle this weekend with the Houston Astros going up against the Texas Rangers in a four-game series. We've got a few cool promos to tell you about, too: Friday has fireworks (natch) and a Pinot in the Park wine tasting, the first 15,000 fans on Saturday get a Justin Verlander replica white jersey, and the first 10,000 fans on Sunday get an Astros clutch. Plus, being that it's mom's special day this weekend, they've got Mother's Day ticket packages with pink Astros jerseys and Kendra Scott pendant necklaces — just in case you forgot to order the flowers.

Emilia Clarke says Game of Thrones fans don't kneel when approaching, but she's totally open to it. Her character in HBO's blockbuster certainly warrants that sort of respect and her title shows why: Daenerys Stormborn of House Targaryen, the First of Her Name, Queen of the Andals and the First Men, Protector of the Seven Kingdoms, the Mother of Dragons, the Khaleesi of the Great Grass Sea, the Unburnt, the Breaker of Chains. Comicpalooza 2019 is this weekend and Clarke is headlining the event where cosplay is encouraged; we don't think there are any icy white wigs remaining in area costume shops. Also whooshing into town are Grant Gustin (Barry Allen/aka The Flash) and John Wesley Shipp (the original Flash); Michael Dorn, Gates McFadden and Wilson Cruz (Star Trek franchise); plus all sorts of photo opps, comics, workshops, films, books, games, art and fun.

Comicpalooza is scheduled for May 10 through May 12 at 10 a.m. to midnight Friday and Saturday and 9 a.m. to 8 p.m. Sunday at George R. Brown Convention Center, 1001 Avenida de las Americas. For information, visit comicpalooza.com. Admission prices vary by experience, ranging from $10 for a children's day pass to $289 for a three day VIP pass; autographs priced separately. 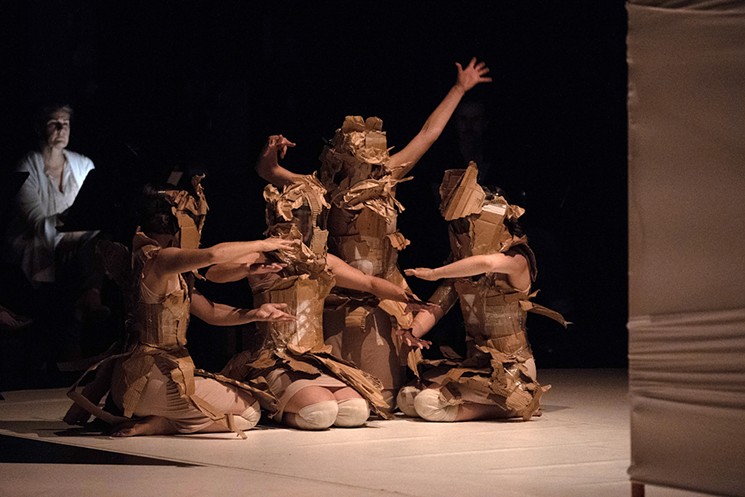 ARCOS Dance is set to perform One Day Stint when Best of Fringe 2019 returns to MATCH this Friday night.
Photo by Alex Masi
A stern side-eye is the appropriate reaction when some yahoo just has to check his phone during a theater or dance performance. So it comes as a surprise to learn that ARCOS Dance, one of the headliners during this weekend's Best of Fringe 2019, actually wants audience members to turn on their phones. During One Day Stint everybody will be asked to crank the volume up on their phones and navigate to a URL; the resulting audience-driven cacophony then forms the soundtrack for a solo dance. The curated program of veteran performers, presented by Pilot Dance Project, also includes a few newbies to the Fringe experience: Call Me Ann Collective, paying tribute to Governor Ann Richards; Cynthia Garcia with a dance about being trapped in dysfunction; and WIP Productions where a woman awakens to find she's gone mute.

We were all a bit shocked when Houston Grand Opera hosted the American premiere of Mieczyslaw Weinberg's The Passenger, told from a former SS officer's viewpoint as she is forced to reflect on her past sadistic cruelty. That opera helped shine light on the genius of the 20th century composer, who often was relegated to the shadows by his more famous friend and fellow composer Dimitry Shostakovich. Now Da Camera is presenting another of Weinberg's works, his Piano Quartet; Daedalus Quartet makes its Da Camera debut with Artistic Director Sarah Rothenberg on piano. And how best to tackle the rest of the program — Mendelssohn's Octet in E-flat Major? Brentano Quartet joins Daedalus on the Wortham stage for this Friday's Weinberg and Mendelssohn. 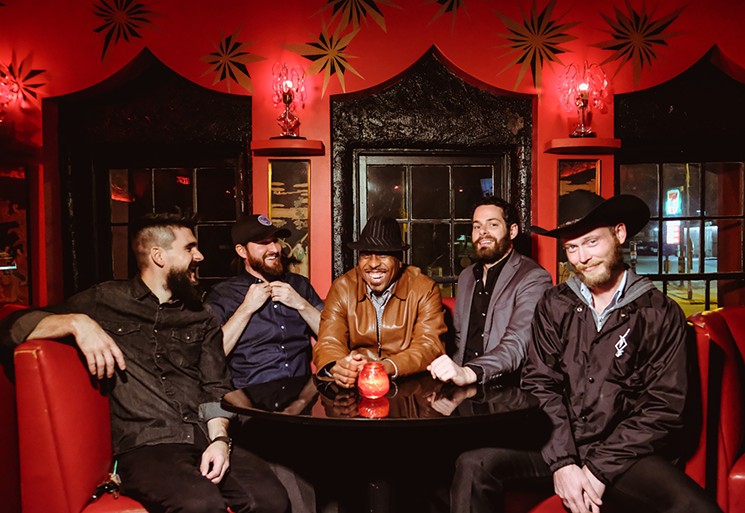 Don't head for the 'burbs; we've got another reason to stay downtown after filing all those TPS reports. Historic Market Square Park is launching a new Summer Concert series with Austin-based soul funk band Tomar and the FCs headlining the inaugural event. Warming up the crowd with its psychedelic soul, rock and roll, and African rhythms is Kalu and the Electric Joint. Nosh on yummies (and purchase beer/wine) from Niko Niko's and remember that on-street parking is free after 6 p.m.

This program year Apollo Chamber Players has been commissioning works that reference the cultural origins of contemporary composers. For Roots, their season finale, they asked Rice University Professor of Music Pierre Jalbert to channel his French-Canadian ancestry; the resulting L’esprit du Nord (Spirit of the North) for string quartet makes its world premiere this weekend. The program also includes a performance of Dvorák's String Quartet No. 14 and Serbian-born Ana Sokolovic's Commedia dell’arte (string quartet) and Vez (solo cello). Those wanting to dig deeper should show up for the pre-concert Q&A at 7:30 p.m.

Let the record reflect that Beethoven's Emperor Concerto was on the program long before Japanese Emperor Akihito broke two centuries of tradition by abdicating the Chrysanthemum Throne. Mercury's season finale, Beethoven's Fifths, includes performances of Piano Concerto No. 5 ("Emperor") and the triumphant Symphony No. 5, both using instruments from the composer's era. Antoine Plante conducts and Mercury is joined by pianist Alon Goldstein on fortepiano. A pre-concert lecture is slated for 7:15 p.m.

Dragon dances, bubble tea and K-pop; we can't think of a better way to kick off Asian Pacific American Heritage Month than with AsiaFest 2019 at Asia Society Texas Center. But one look at the world map and it's clear that covers a lot of culture, so the afternoon also includes Bharatanatyam and Indian folk dance, traditional Vietnamese and Chinese music, and Filipino song and dance, plus vendors serving all of our favorite foods: dumplings, kebabs, poke, boba tea and mochi. Art lovers will want to grab this chance to view both art exhibitions for free — "Super Sarap" and "Site Lines: Artists Working in Texas," while everybody will find something to buy at the international bazaar.

Now that Arya has triumphed over the Night King at the Battle of Winterfell, with a little help from her Valyrian steel dagger, we're getting antsy at the thought that our beloved Game of Thrones is about to reach its climactic conclusion. We need our GoT fix and Station Theater is standing by to help with A Sketch Show of Fire & Ice: Best in the Westeros. Expect a night of comedy and sketches inspired by the HBO series, with nods to Jaime pushing Bran out the window, trial by combat to "make the bad man fly" through the moon door, and other iconic scenes.

A performance is scheduled for May 11 from 8 to 9:15 p.m. Saturday at Station Theater, 1230 Houston Avenue. For information, visit facebook.com/events/430317561094272. $8 to $10.
KEEP THE HOUSTON PRESS FREE... Since we started the Houston Press, it has been defined as the free, independent voice of Houston, and we'd like to keep it that way. With local media under siege, it's more important than ever for us to rally support behind funding our local journalism. You can help by participating in our "I Support" program, allowing us to keep offering readers access to our incisive coverage of local news, food and culture with no paywalls.
Make a one-time donation today for as little as $1.