Best Bets This Weekend: Outbreak, Ballet, and a Haunted House

Principal Jessica Collado in Christopher Bruce’s Hush. Photo by Amitava Sarkar, Courtesy of Houston Ballet
This Friday is Friday the 13th, and with the unluckiest of days upon us – and there’s some other stuff going on too – it seems like a good time to say that people in uncertain times face more stress and anxiety than usual. It’s important to practice self-care and continue engaging in and with activities that support our well-being. If you’re interested in getting out of the house this weekend, we’ve compiled a list of things to do. From film screenings to music and even a haunted house, we’re sure we’ve got something you can enjoy. Just remember to wash your hands.

What’s the appropriate gift to commemorate a 150th world premiere? We’re not sure, but direct your suggestions to the Houston Ballet this weekend when the company debuts its 150th world premiere during Forged in Houston. The mixed repertoire program includes three one-act contemporary ballets, all of which saw (or will see) their world premieres right here in the Bayou City: Jorma Elo’s ONE/end/ONE, set to Mozart’s Violin Concerto No. 4 in D, K. 218, that premiered in May 2011; Christopher Bruce’s Hush, set to the music of Bobby McFerrin and Yo-Yo Ma, that Houston Ballet premiered back in March 2006; and Trey McIntyre’s Pretty Things, set to eight David Bowie songs, that Houstonians have the opportunity to see for the first time ever this weekend. The 150th honor rightly belongs to McIntyre, a former Houston Ballet Academy student and company member before turning choreographer. And if his name is extra familiar, it’s because Pretty Things is McIntyre’s seventh world premiere commission for Houston Ballet. Read the preview here.


It's on our minds anyway, so let's just lean into it with Thursday’s interrupted screening of Outbreak at The Health Museum. The 1995 Warner Bros. film, inspired by Richard Preston's 1994 bestseller The Hot Zone – or, more specifically, the bidding war over Preston’s scary work of nonfiction – centers on Motaba, a fictitious, highly contagious virus like Ebola that threatens not only a California town but the entire country after an infected monkey is smuggled in and then let loose. Luckily, an all-star cast, including Dustin Hoffman, Rene Russo and Morgan Freeman, stand in the way. The "interrupted" part of the evening refers to commentary offered by two local medical and infectious disease personnel who will be on hand to explain the facts and fictions in the film. Note that the movie is rated R, so anyone under the age of 17 must be accompanied by a parent or guardian.

Byron Jacquet in rehearsal for Between Riverside and Crazy at 4th Wall Theatre Co.
Photo by Jeff McMorrough
An ex-cop tries to keep hold of his rent-controlled New York City apartment while dealing with some new roommates (his recently paroled ex-con son, his son’s girlfriend, and a recovering drug addict) in Stephen Adly Guirgis’s Pulitzer Prize-winning play, Between Riverside and Crazy, opening this week at 4th Wall Theatre Company. Houston theaters have been on a hot streak staging Guirgis’s work over the last couple of seasons – think back to The Last Days of Judas Iscariot, The Motherf*cker with the Hat, and Jesus Hopped the ‘A’ Train (also a 4th Wall production) for proof – and we’re willing to bet the streak will continue. In fact, in an interview with the Houston Press, director Bill Pruitt (a four-time Emmy winner with a resume that includes unscripted favorites like The Amazing Race, Deadliest Catch, and Swamp People) says the play “has a touchpoint for everyone looking to improve their lives or understand their lives better.” Read the full preview here.

ScreamWorld has scared Houstonians for 31 years.
Photo by Jef Rouner
If not for the unlucky date, it would be a strange time of year for a haunted house – though, admittedly, for many there is no such thing as a bad time for a haunted house. This Friday the 13th, ScreamWorld will open its doors for one night’s worth of off-season scares, with just a touch of melancholy finality. The 4.5-acre haunted house complex that Houstonians have loved for the last 31 years – with its three haunted houses, outdoor clown maze, and zombie graveyard – is closing, as owner Jim Fetterly is ready to retire. There are at least two interested buyers, one of which may be looking to open another haunted house on the property, as well as others interested in purchasing ScreamWorld and keeping the Halloween tradition alive. But, if it doesn’t come to pass, you won’t want to miss your chance to say goodbye with a jump scare and one last scream. Read more about ScreamWorld’s last scare here.


Get ready for something that promises to leave a good taste in your mouth when the Black Femme Supremacy Film Fest brings their short film program, Taste Test, to the Houston Museum of African American Culture on Saturday. The fest, founded by Nia Hampton, has screened more than 40 shorts created by and about Black femmes since its 2018 inception. The diverse, seven-short program coming to town includes Alicia Robinson's animated Lazy Day, a heart-squeezer about a father-daughter bond that won the fest’s animated short Audience Award in 2019; Lindsey Addawoo and Kyisha Williams’s supernatural Queen of Hearts, a Black feminist reimagining of a Victorian-era queen who can literally rip the hearts out of those who wrong other people; and Britt Sankofa’s Doll Baby, which utilizes stop motion, still life, and plenty of dolls to explore the way the childhood toy can shape an identity (and it also took home an Audience Award at the fest in 2019, this one in the experimental short category). Davóne Tines is one of six vocalists that will join the Houston Symphony for two performances of John Adams's El Niño.
Photo by Nikolai Schukoff
Get ready to hear a familiar story in a new way this weekend over at Jones Hall, where the Houston Symphony will perform John Adams’s El Niño. The oratorio, which was first performed in Paris 20 years ago, centers on the birth of Jesus, but from different and unique perspectives, mixing Bible verses with Spanish-language poetry to create quite a massive work. So big that guest conductor David Robertson will lead not only the Houston Symphony, but the Houston Symphony Chorus, six vocalists (mezzo-soprano Kelley O’Connor, soprano Susanne Phillips, bass Davóne Tines, and countertenors Daniel Bubeck, Brian Cummings and Nathan Medley), and the Houston Grand Opera’s Children’s Chorus. The Guardian says Adams’s “switch to a female, non-European perspective highlights unusual facets of the familiar story, while mirroring the biblical slaughter of the innocents in an account of a massacre in Mexico City in 1968 gives a sharp contemporary twist.” 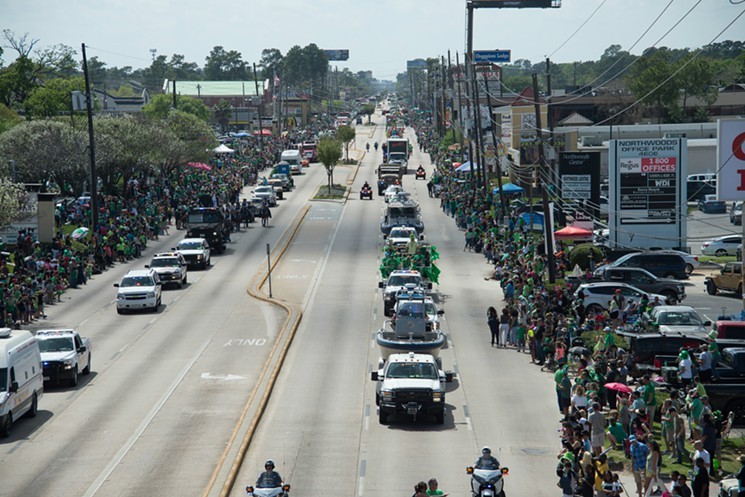 The FM 1960 St. Patrick’s Parade returns to Northwest Houston for its 42nd year.
Photo by Richard Salazar.
There’s no shortage of ways to celebrate St. Patrick’s Day in Houston this year (in fact, you can peruse quite the list here), but our pick is the 42nd Annual FM 1960 St. Patrick’s Parade. Fans of the New 93Q’s Q Morning Zoo radio show will be pleased to see co-host (and avid marathoner) Kevin Kline serve as this year’s grand marshal, leading a series of floats, vehicles, horses, people, etc. along the 3-mile-long route down FM 1960 (from Champions Forest to Kuykendahl) in Northwest Houston. After the parade, head over to Bareback Bar and Icehouse in Spring for award presentations – and it’s partying for a good cause, because money raised by the parade and all official satellite parade events will go to the Cypress Creek EMS Scholarship and Education Fund.


Dig out the bellbottoms, because Pitch Me This (PMT) Productions is bringing their Cabaret Series to Social Beer Garden HTX this Sunday with PMT Pop Up: 70s Cabaret. The singers of PMT, a local production company, will turn their talents to disco (which will be resurrected for at least a couple of hours), along with funk, rock and soul, just as they’ve been doing since 2014. Since then, PMT has been sending its talented singers around the city, and these cabarets are concert-style performances that “pop up” in different downtown venues for one-night-only engagements. The shows are themed – sometimes by decade (70s, 80s or 90s) and sometimes by genre (country, holiday, or Disney) – and backed by live accompaniment in the form of the PMT Band.

PMT Pop Up: 70s Cabaret is scheduled for 8 p.m. March 15 at Social Beer Garden HTX, 3101 San Jacinto. For more information, call 832-516-9167 or visit pitchmethis.com. $10.
KEEP THE HOUSTON PRESS FREE... Since we started the Houston Press, it has been defined as the free, independent voice of Houston, and we'd like to keep it that way. With local media under siege, it's more important than ever for us to rally support behind funding our local journalism. You can help by participating in our "I Support" program, allowing us to keep offering readers access to our incisive coverage of local news, food and culture with no paywalls.
Make a one-time donation today for as little as $1.