Pride Houston 365 Marches On With Month Of Events

Pride flies high this June. Photo by Dalton DeHart
After two years on hiatus, the streets of Downtown Houston will once again overflow with on June 25 as part of the 44th Annual Official Houston Pride LGBT+ Celebration Festival and Pride Houston 365 Parade on Saturday, June 25. And because pride is not just one day but instead all year, the aptly named organizer, Pride Houston 365, has assembled a bevy of events throughout the month to celebrate.

Thasia Madison, co-president of Pride Houston 365, explained why this month and celebrations like this matter.

"[The LGBTQ community] needs that visibility, that awareness of our community. We need that support. With so much anti-LGBTQ legislation that's happening, we need to combat that with love, with peace, with people coming together in unity. Pride Month is just that. It's the love and the light. It's the lifting of our community."

It's hard to argue with her. It's not easy being LGBTQ...although we sure make it look like a lot of fun. Despite the cosmic fabulouslity of the queer community, turbulence abounds both statewide and nationally. It looks as if Roe v. Wade is facing jeopardy, which has implications that could spell demise for same-sex marriage legality. Books are being banned, with many of them stemming from out-of-the-closet authors or detailing queer story lines. Florida Governor Ron DeSantis is pushing the “Don’t Say Gay” bill. Trans athletes in sports are causing a stir, while trans youth are being denied gender affirming healthcare.


Take your children to CHURCH, not drag bars.

Most recently a Texas Legislator proposed a bill that would ban minors from drag events, which would effectively end Drag Queen Story Time at libraries. Even United States Representative Lauren Boebert is taking part in the hate with her tweet "Take your children to CHURCH, not drag bars."

Well, if that is the logic, given the gun massacres in places of worship as well as Catholic sex scandals, Drag Queen Story Time is a much safer place for children to congregate.

Despite the fact the LGBTQ community still faces hate and fear, it has rallied together, and this June shows no slowdown in overcoming adversity. Fittingly, Pride Houston 365 used the theme "the beat goes on" when developing the month of events.

"That theme is dedicated to our history, like Lawrence v. Texas, [which overturned a discriminatory law against same-sex intercourse]. If you look at some of the earliest blues recordings, they were made in Houston. If you look at our history, Houston is a first in a lot of things. It's a nod to Houston's historical resilience as well as our musical resilience. However you choose to look at, the beat goes on. We're still here and we're still striving for what comes next," Kendra Walker, co-president of Pride Houston 365 said.
One of the largest displays of visibility and community is the organization of the Houston Pride LGBT+ Celebration Festival followed by the Pride Houston 365 Parade. The day marks the country's third largest Pride celebration on Saturday, June 25.

And just like the theme of this year's celebration, the beat goes on with several more events throughout the month. The full schedule is below:

Friday Funday Out In Exploration
11 a.m. – 4 p.m.
The Montrose Center
401 Branard
As the Official Pride Queer Youth of Color STEM event for Houston youth, IT professions will lead students through engaging STEM projects. This event is capped to 50 students, so RSVP to secure a space.

Pride Bar Crawl
4 – 11:59 p.m., Saturday, June 18
Various locations
Meet at BUDDY's (2409 Grant Street) for a night full of fun. Get tickets to access perks and the crawl map. A portion of the proceeds go to The Trevor Project.

Lounge One by One Medical
4 – 8 p.m., Thursday, June 23
411 Travis
This wellness event was designed to help people center themselves while celebrating, because it’s all about balance. Enjoy local entertainment, curated activities, intention setting, fresh bites and a sober spritz bar.

Rock The Runway 2022 | Official Pride Fashion Show
6 – 11 p.m., Thursday, June 23
RISE Rooftop
2600 Travis
Rock the Runway will feature some of the hottest models in Houston walking the catwalk in this summer’s latest styles in casual wear, ladies evening wear and much more. This event is free to the first 200 RSVPSs and open to the public.

Eden 2022 | Official Pride Girl+ Party 21+
9 p.m. Friday, June 24 to 2 a.m. Saturday, Jun 25
RISE Rooftop
2600 Travis
Everyone's favorite girl+ party is back. Presented by Pride Houston in association with Jeff Harmon Entertainment, this event is dedicated to the strong womxn of Houston's LGBT+ Community, but as always, male friends are welcome to the party.

Pride Run 2022 5k/10k and 5k Walk
9 – 10 a.m., Saturday, June 25
Hennessy Park
1900 Lyons Avenue
One Love. One Finish. The Pride Run is the Nation’s first intentionally LGBTQIA inclusive synchronized 5k/10k walk and run dedicated to bringing people together to have fun, be active, and support our wonderful and diverse community. 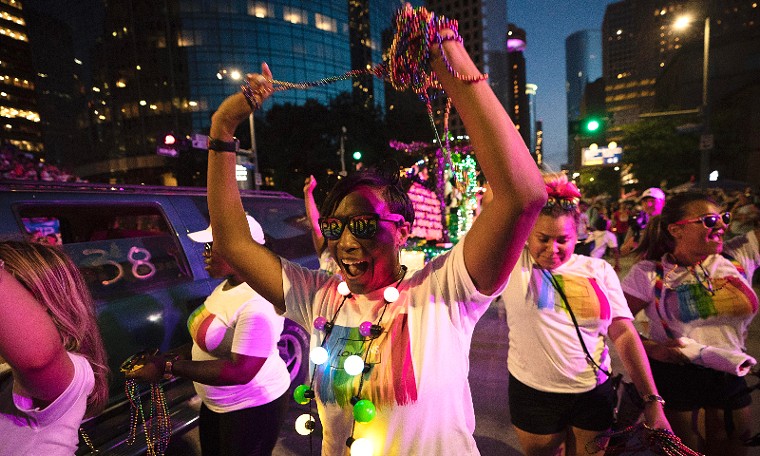 People from all backgrounds will join for one of the country's largest Pride celebrations.
Photo by Dalton DeHart
The organization hosting the event underwent a rebrand of the logo and theme to indicate that pride is a daily celebration 365 days a year.

"We felt that pride needed to serve 365 days a year, whether that means us showing up at other events or partnering with other organizations, and the month of June is just the cherry on top," Walker said.

A year-round approach also means more opportunities for Pride Houston 365 to raise critical funds for grants and youth scholarships, including the Monica Roberts Scholarship Fund. Roberts was a well-known trans activist and award-winning journalist who passed suddenly in 2020. She also served as an honorary grand marshal in 2019's parade.

Walker mentioned events where Pride Houston 365 plans to be present. "The Human Rights Conference, the Heritage Festival, and our luncheon where we award scholarships to LGBTQ youth are coming up. We want to be a year-round celebration that extends beyond June to address the issues we face, brings awareness, and gets the LGBTQ community back into the bigger community."

Whether sashaying at Rock The Runway, having fun at the Pride Run, or serving eleganza during the June 25 extravaganza, Pride Month is going to be a fun ride, dah'ling. And the beat will go on all year.

June is Pride Month, which features events throughout the year. It culminates with the 44th Annual Official Pride Houston 365 LGBT+ Celebration Festival at 1 p.m., 901 Bagby, June 25. The Pride Houston 365 Parade starts at 7 p.m., June 25. For information or to purchase tickets to the events, visit pridehouston365.org. The 44th Annual Official Houston Pride LGBT+ Celebration is free for children 12 and under and seniors 60+. Tickets range $5 - $250 for ages 13 to 59. The parade is free to attend.
KEEP THE HOUSTON PRESS FREE... Since we started the Houston Press, it has been defined as the free, independent voice of Houston, and we'd like to keep it that way. With local media under siege, it's more important than ever for us to rally support behind funding our local journalism. You can help by participating in our "I Support" program, allowing us to keep offering readers access to our incisive coverage of local news, food and culture with no paywalls.
Make a one-time donation today for as little as $1.