Shea Serrano on Carpooling, Hardcovers (and Other Things) Book Cover/Hachette Book Group, Inc.
Shea Serrano spent a lot of time working on his new book, and he really wants you – yes, you – to buy a copy.

“These books take me about two years from the time they’re sold until the time they come out,” The New York Times best-selling author says of his latest offering, Movies (And Other Things). “When I was thinking, ‘Do I want to do this again?’ writing about movies made the most sense because I’m just trying to celebrate all the stuff I like.”

And Serrano likes a lot of stuff. A San Antonio native who lived in Houston for more than a decade before returning to the Alamo City last summer, Serrano has published three books: Bun B’s Rap Coloring and Activity Book in 2013, The Rap Year Book in 2015 and Basketball (And Other Things) in 2017.

Both The Rap Year Book and Basketball made it onto The New York Times’ Best-Seller list, and the latter was also included in President Barack Obama's book recommendations at the end of the year.

“I had a really good time with it,” he says of Basketball. “I liked the structure and the way it allowed me to talk about a bunch of stuff I like without being confined to telling one specific story over 240 pages.”

Utilizing the (And Other Things) tagline – which he tells us he never intended to become a series – Serrano is free to discuss just about anything that might be related to the subject matter, even in the slightest way.

In his new book, for example, he discusses which action movie characters had the best relationship with their dog. It’s a simple idea, but its appeal is founded in Serrano’s ability to humanize (and humorize) the otherwise hardened characters of John Wick, Bob Saginowski and Robert Neville.

The former Houston Press contributor also deliberates what movies might be better (or worse) if they replaced a lead character with Dwayne “The Rock” Johnson, which kills should be in the action movie hall of fame, should such a place ever exist, and whether the raptors from the “Jurassic Park” franchise were truly villainous or simply misunderstood.

Serrano (center) in 2018 at Stevenson Middle School, where he once worked as a teacher and coach.
Photo by Marco Torres
“I wanted this one to be a hardcover,” Serrano says of his new book. “I’d never done a hardcover book before, so that was important to me. Beyond that, anything else that happens after you sell a book is all just a bonus.

“Of course, I would like it to be on the Best-Seller list again,” he adds. “If I could have three in a row, that’d be really cool. I don’t know how many people from San Antonio have done that before, certainly nobody from my side of town, and I’d like to be the first.”

In an email from the publisher, parts of the book are also referred to as “sad,” but Serrano says that's probably an accidental mischaracterization.

“There’s no heartbreaking story in there, but... there’s a chapter about the movie Selena, which is a really important movie in my life and in the lives of a lot of Mexican-Americans,” he says. “I talk a bit in that chapter about being a Mexican-American who lives in America. But that’s a thing where, if a person of color reads it, they’ll go, ‘Oh, I get it.’ And when a white person reads it, they’ll go, ‘Should I say this is sad just to be safe?’”

But what isn't safe is any reporter who might suggest that maybe Jennifer Lopez's career wouldn't have taken off the way it did had it not been for her starring role in the aforementioned movie. We learned that firsthand.

“Jennifer Lopez is a movie star, there’s no way around it,” Serrano says emphatically. “She’s beloved in our community for that movie, for sure, and then we just sort of attached ourselves to her because she was the one out there doing it. 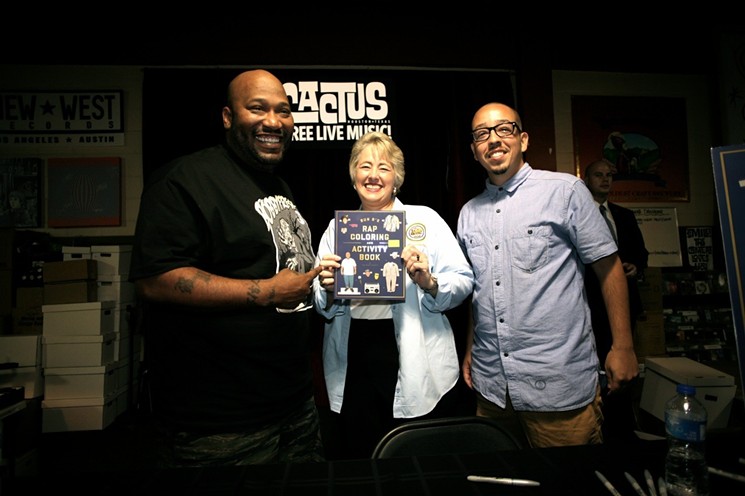 Bun B, Annise Parker and Serrano at Cactus Music in 2013
Photo by Marco Torres
And Serrano has personal experience with unconventional teams. Before he was a best-selling author, he was a middle-school science teacher in Houston. During his time as an educator, he regularly carpooled to work with my friend’s dad. (For the sake of anonymity, we'll call him Kenneth.)

“That’s my homie!” Serrano says of Kenneth, an overt warmth in his tone. “We were good friends, which was the funniest thing to me because he was this 60-year-old, long-bearded white guy. But he was just cool as shit.”

While commuting to and from work, the pair would listen to music together. Serrano rarely picked the tunes – that was Kenneth’s job – but he loved learning about new genres from his colleague.

“He knew so much about music, and that’s all we would talk about,” Serrano says. “He was putting me on all kinds of Texas folk shit that I never knew existed.”

The breadth of Kenneth’s musical knowledge notwithstanding, Serrano noticed one glaring omission: hip hop. Eventually, he decided it was his responsibility, his duty to introduced Kenneth to rap.

“I don’t know if it was his first rap song, but it had to have been one of his first five,” Serrano says with a laugh. “This, to me, was such an interesting experiment. Because I was going to be able to, for the first time, play a rap song for this guy.”

After much deliberation, Serrano chose Outkast’s “Elevators” as Kenneth’s primer. The lead single from the Atlanta duo’s sophomore album features lyrical acrobats, a history lesson and a catchy chorus, making for an encompassing yet accessible outline of genre.

With Movies Serrano hopes he can share his love of film (and other things) with even more Kenneths. His writing is equal parts relatable and singular. He boasts an extensive familiarity with pop culture, but his musings are oddly particular, usually humorous and always insightful.

Two years removed from Basketball Serrano hopes everyone who buys a copy of Movies will enjoy it. He wants to reach the Best-Seller list again, but otherwise his ideations of success are grounded in the book being appreciated by his many fans.

“I just want to sell a bunch of copies,” he says. “If I sell a ton of copies, then it’ll feel like a success.”

Movies (And Other Things) is available today.
KEEP THE HOUSTON PRESS FREE... Since we started the Houston Press, it has been defined as the free, independent voice of Houston, and we'd like to keep it that way. With local media under siege, it's more important than ever for us to rally support behind funding our local journalism. You can help by participating in our "I Support" program, allowing us to keep offering readers access to our incisive coverage of local news, food and culture with no paywalls.
Make a one-time donation today for as little as $1.