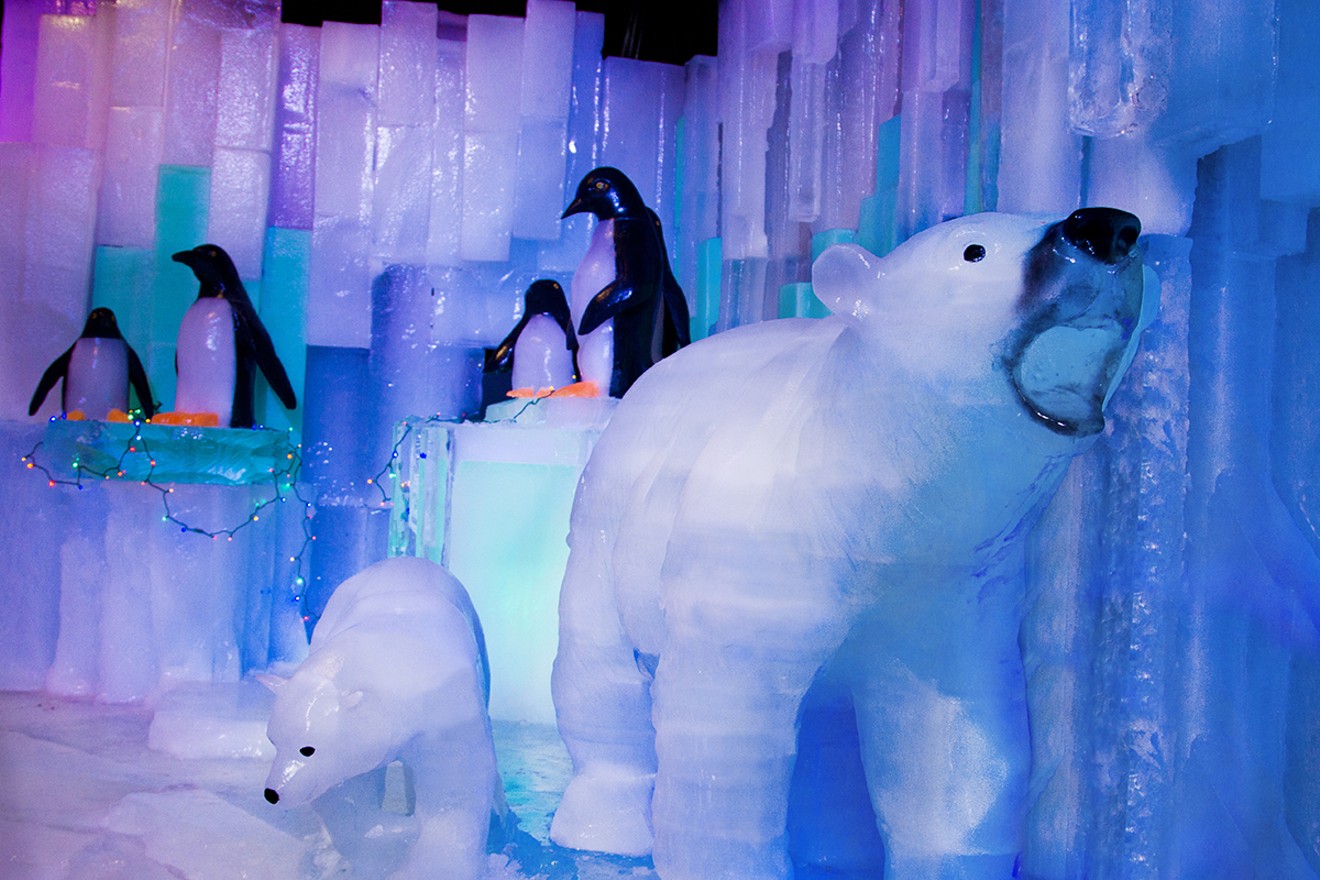 ICE LAND by the numbers: two million pounds of ice, 1,000 parkas, and a 28,000 square foot interior that's chilled to nine degrees. Photo courtesy of Moody Gardens
What's up is down, what's wrong is right, and — in what must certainly be an alternate universe — polar bears and penguins have finally met in the middle. It's a "cool" concept on the part of Moody Gardens, theming ICE LAND: Pole-to-Pole so that the Arctic polar bear and the Antarctic penguins can be found in the same place, but the sculptures carved out of 300-pound blocks of colored ice aren't exactly chilling out together.

ICE LAND is kept at nine degrees so visitors will want to put on a parka (those are provided) before entering the South Pole section to encounter penguins. A 30-foot glacier slide separates the penguins from the North Pole, an area that has reindeer, whales and aquatic scenes. "[The slide] is a favorite for kids and adults," says Jerri Hamachek, marketing and public relations manager. The two million pounds of holiday- and animal-themed sculptures finish up with Rudolph (he of the red nose) and Santa Claus, as well as a teaser for next year's ice concept. The 21 and up crowd might want to stop in for a pour at Shivers, a full-service bar made out of ice. 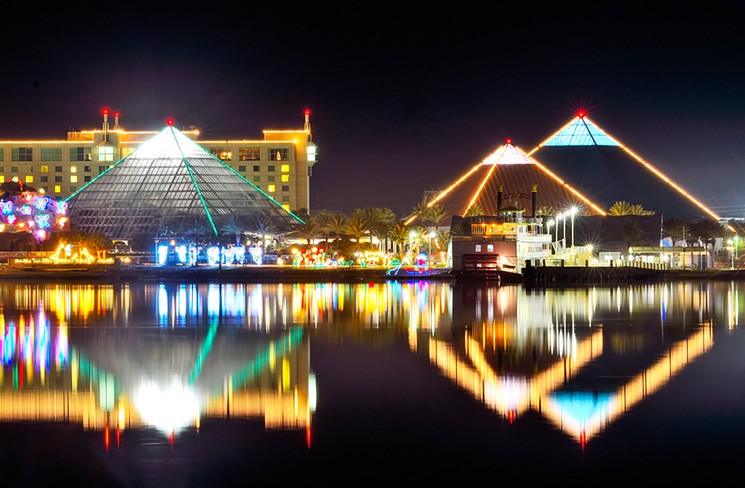 Festival of Lights is a mile long trail filled with sound-enhanced lighting and animated displays themed to holiday music. Bring a non-perishable food item on Thursdays for special discounts.
Photo courtesy of Moody Gardens
Moody Gardens actually has eight holiday attractions, and opening day festivities for the 17th Annual Festival of Lights — a mile long trail with more than one million lights — are a sort of National Lampoon's Christmas Vacation meets Las Vegas affair. "We have a tradition where Santa parachutes in, which is a big exciting thing for the kids," says Hamachek. After some musical entertainment, dance performances and speed painting by Ange Hillz, Santa takes on the duties of Clark Griswold. "At 6 p.m. Santa flips the switch for the whole Festival of Lights; that's when we officially open." Don't worry folks; we don't expect Galveston to suffer a blackout: Hamachek says they've got it down to a science.

Scenes along the FoL trail are enhanced with sequencing, music and animations and include the nativity, The Nutcracker, The Twelve Days of Christmas, angels, a train station and an area dedicated to Christmas along the Gulf Coast. "We also have several different lighted tunnels that you'll walk through," says Hamachek. Admission also gains visitors access to the Bay Area's only outdoor ice skating rink.

In addition to train rides and photos with Santa, other can't miss activities include seeing holiday films in 3D on the largest screen in Texas and experiencing Rudolph in 4D. "The seats rumble, there's snow that falls, maybe some wind in your face, it syncs with the story that's being told. Even your sense of smell is being engaged," says Hamachek.

With eight holiday attractions at one venue, it's easy to see why this is the most wonderful time of the year.

The 2018 Holiday Season at Moody Gardens runs daily from November 17 through January 6. ICE LAND opens at 10 a.m. and Festival of Lights opens at 6 p.m., Moody Gardens, One Hope Boulevard, Galveston, 409-744-4673, moodygardens.com/holiday_season/plan_your_visit, $5.95 to $64.95. Hours vary on value days, Thanksgiving and Christmas.
KEEP THE HOUSTON PRESS FREE... Since we started the Houston Press, it has been defined as the free, independent voice of Houston, and we'd like to keep it that way. With local media under siege, it's more important than ever for us to rally support behind funding our local journalism. You can help by participating in our "I Support" program, allowing us to keep offering readers access to our incisive coverage of local news, food and culture with no paywalls.
Make a one-time donation today for as little as $1.