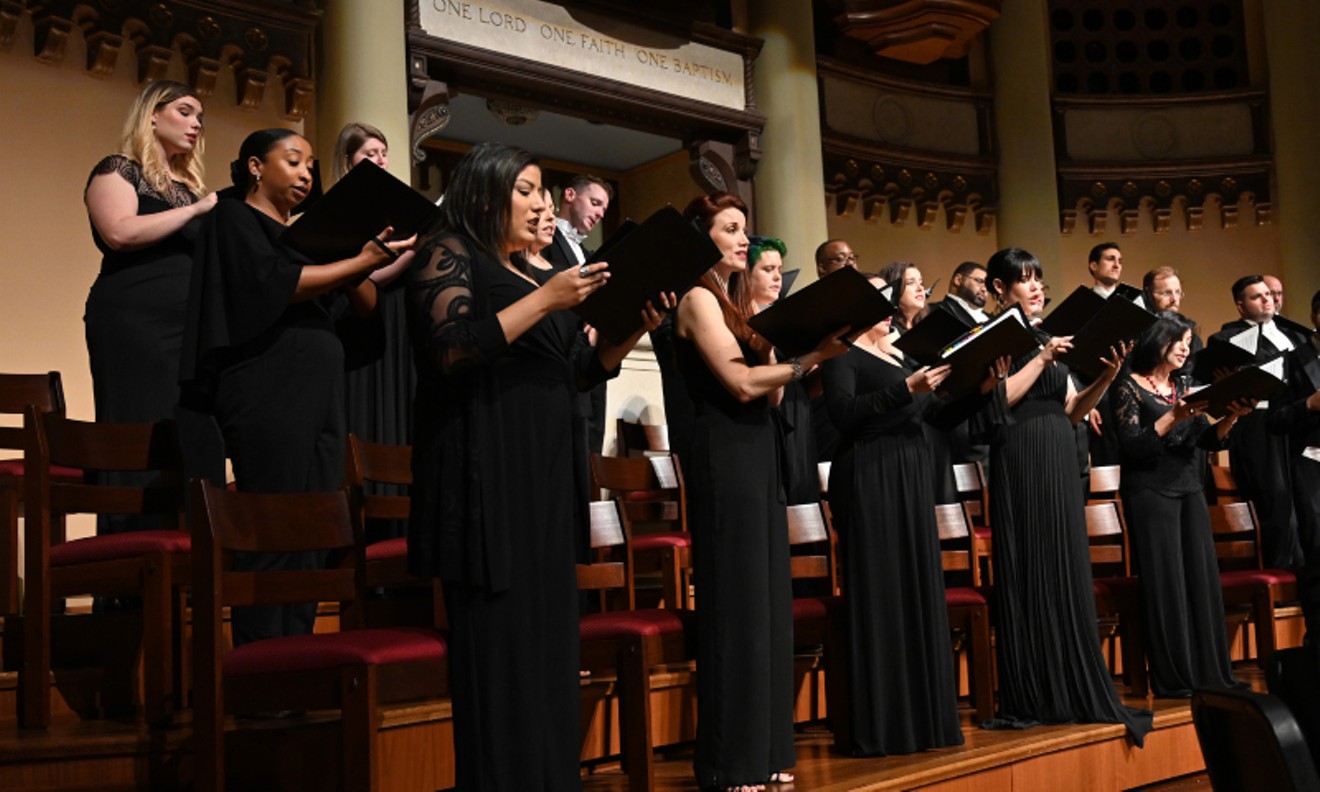 Brahms' requiem for the living will get the royal treatment during a special performance this weekend. Photo by Jeff Grass Photography
With so much of 2020 and 2021 bringing unparalleled death and loss, sometimes we need a reminder that we are still very much alive. This weekend, the Houston Chamber Choir will present “Ein deutsches Requiem” by Johannes Brahms – known better as his requiem for the living – to do just that as part of the choir’s “To Bring Comfort” concert. It takes place Saturday at 7:30 p.m. at South Main Baptist Church, 4100 Main Street, and will be available on virtual release starting November 22.

“With our season themed ‘Sing out the new day,’ we wanted this concert to proclaim the hope and sense of renewed joy we were having as we move into a new phase of COVID-19. I also wanted to recognize the fact that everybody has been through a lot these last 18 months, and some people in particular have suffered significant losses, so Brahms’ requiem suggested itself to me on a couple of cases,” said Bob Simpson, founder and artistic director of the organization.

Simpson is correct in his observation. First, it is a requiem, and because so many people have lost their lives recently, it is completely appropriate to pay homage to them and to reflect. Second, Brahms wrote it to comfort the living. The very first words are, "Blessed are those who morn." It is only in the last movement the choir sings, "Blessed are those who are of the dead."

“The piece really does have something special to say about our moment now as we move ahead and reflect on all the anxiety and uncertainty and also take on the sense of hope that we are experiencing now. The Brahms requiem is the perfect expression of that,” Simpson added.

Founder and Artistic Director Bob Simpson will lead the Grammy Award-winning Houston Chamber Choir this weekend.
Photo by Jeff Grass Photography
Brahms’ requiem stands out against other requiems for a few reasons. There’s speculation regarding the inspiration for it. Brahms might have been looking for comfort after his mother’s passing around this same time period. Also, it might be that he and his mentor Robert Schumann had discussed writing a piece like this, and Schumann may have leaned toward a German requiem rather than the more traditional ones in Latin.

In writing the piece, Brahms picked his own text out of The Bible.

“He knew his Bible very well – and he handpicked passages that he felt reflected his personal theology. Here, we have a piece that has a completely different approach than the traditional requiem, and it focuses on hope and the sense of wellbeing that he found in Scripture,” Simpson said. “It’s a piece that is predominantly in the major keys. This isn’t an accident. He wasn’t writing a mournful piece. He was proclaiming great hope and great promise. We’re presenting it because we hope it’s a community rallying point to take stock of what has happened but give us a sense of courage and forward motion to take on the hope of the future.”

Adding to the concert, the choir will be performing Brahms’ own four-hand piano arrangement featuring noted pianist Brian Connelly, artist teacher of piano at Rice University’s Shepherd School of Music, and Yvonne Chen. They will play a 19th century Bösendorfer piano similar to one Brahms would have played.

“It’s not a modern concert grand piano. It has less iron in the structure, so the strings are under less pressure. There’s a gentleness to the sound that turns the requiem into a chamber piece. There’s an intimacy that this accompaniment allows us to explore. They’ll provide an important part to this piece by providing intimacy and approachability that makes it even more touching under these circumstances,” Simpson described.

The concert will also honor the researchers and medical professionals who have stood by to comfort the ill and their families and also perform the work of researching and delivering vaccines. Houston Chamber Choir is collaborating with the Houston Methodist Center for Performing Arts Medicine (CPAM) for “To Bring Comfort.” The concert opens with the premiere of “Hymn for Strength,” a new composition with words by Houston Poet Laureate Outspoken Bean and music by CPAM Director Todd Frazier. This new work will be performed by a choir comprised of representatives from Houston's healthcare community, led by M.J. Gallop.

“Todd dedicated this to the Texas Medical Center’s healthcare employees, caregivers and first responders fighting COVID-19 in our community and around the world. For me, that adds a very special dimension to this concert,” Simpson said.

Houston Chamber Choir’s “To Bring Comfort” plays 7:30 p.m. Saturday at South Main Baptist Church, 4100 Main Street, and will be available on virtual release starting November 22 on the Houston Chamber Choir Digital Stage. For tickets or information, call 713-224-5566 or visit houstonchamberchoir.org. $10 to $25.
KEEP THE HOUSTON PRESS FREE... Since we started the Houston Press, it has been defined as the free, independent voice of Houston, and we'd like to keep it that way. With local media under siege, it's more important than ever for us to rally support behind funding our local journalism. You can help by participating in our "I Support" program, allowing us to keep offering readers access to our incisive coverage of local news, food and culture with no paywalls.
Make a one-time donation today for as little as $1.