Market Square Park Gets In The Groove With DiverCity Project 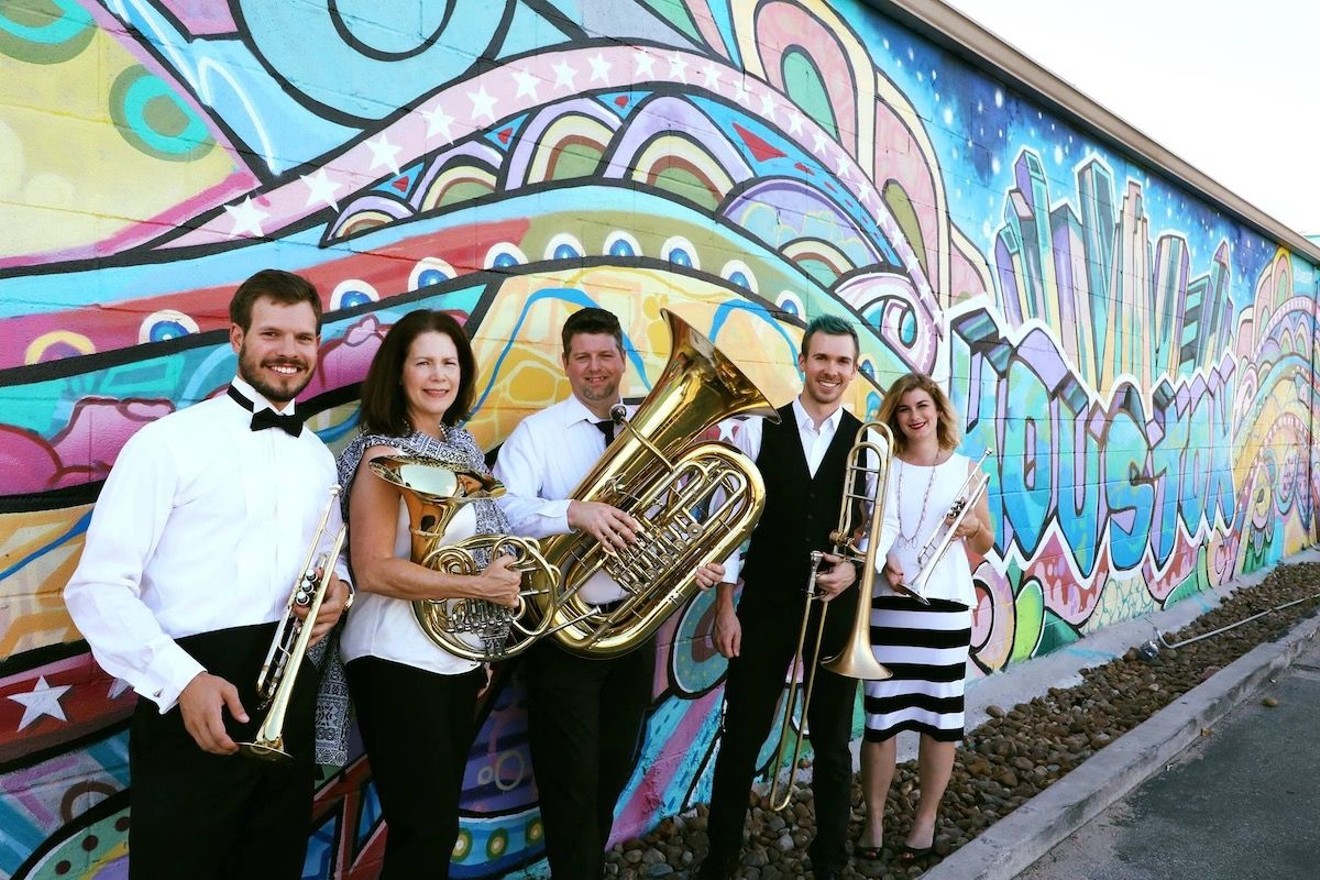 Russell Haehl (trumpet), Mary Gold (horn), Allyn Lindsey (tuba), Ryan Rongone (trombone) and Sarah Perkins (trumpet) make up the members of Houston Brass Quintet. Photo by Roetographer
"Houston is so Plain Jane," said no one ever. Our richly cultured city has no shortage of diversity, and we don't need to drum up the stats to support that statement. To boot, the plethora of festivals, museums and traditions make our city's coat of many colors even more fun. Thus, Downtown District is the joining the hoopla by launching DiverCity Project. This bi-monthly concert series, held at Market Square Park, showcases the city's well-seasoned musical influences through performances highlighting a multitude of genres. Thanks to funding from Houston Arts Alliance, the organization is bringing in Houston Brass Quintet for six hourlong concerts with themes including jazz with African roots, Middle Eastern, Western Bluegrass and more.

Houston Brass Quintet has planned five mini-concerts, each held on a Saturday afternoon, to represent a different musical influence found in the city. The sixth concert will capstone the series with an original composition by local composer Stephen Bachicha, including movements that coincide with the previous weeks' themes. Several of the concerts will incorporate guest groups to bring in the variety of musical flavors.

The schedule goes as follows:
The park itself provides a great setting for the brass band.

"As a musician, it's a fun place to perform because the building around the park provide a good acoustic place," said Russell Haehl, artistic director for Houston Brass Quintet. "You can hear the reverberation echoing. There will be people talking in the background and the buses passing by. It adds to the community feel of the concert. It will be a relaxing day out at the park."

The concert series makes for a great excuse to spend time in Houston's revitalized Downtown area, but it also provides a source of entertainment for the more than 10,000 residents who choose to make Downtown their home, and it capitalizes on the area's reputation as accessible artistic epicenter.

"Because of our proximity to the theater district, [DiverCity Project] is a good tie-in because it puts performance art front and center," Cañizares said.

Downtown District has hopes to extend DiverCity Project into an ongoing showcase series, spotlighting different forms of expression in a variety of places throughout Downtown. Enthusiasts can keep an eye out for dance and visual art as potential upcoming iterations for the series.

"We're constantly trying to activate underutilized spaces and nonconventional spaces, and this gives us that opportunity," Cañizares said.

As with all things related to Market Square Park, the concerts are free to attend. Blankets, lawn chairs and picnics are welcomed. Food, beer and wine are available for purchase at Niko Niko's, but leave the glass containers and outside beverages at home.

DiverCity Project takes place at 1 p.m. bi-monthly from March 7 to May 16 at Market Square Park, 301 Milam. The April 18 concert starts at noon. The 32nd annual Art Car Parade, also located downtown, is scheduled for the same day. DiverCity Project provides a 1-2 punch for parade attendees. Park once and stay all day for an afternoon filled with music, lunch at one of the many restaurants surrounding Market Square Park, and Houston's quirkiest parade. For information, visit marketsquarepark.com. Attendance is free.
KEEP THE HOUSTON PRESS FREE... Since we started the Houston Press, it has been defined as the free, independent voice of Houston, and we'd like to keep it that way. With local media under siege, it's more important than ever for us to rally support behind funding our local journalism. You can help by participating in our "I Support" program, allowing us to keep offering readers access to our incisive coverage of local news, food and culture with no paywalls.
Make a one-time donation today for as little as $1.