Opening Night with Beijing-born pianist Yuja Wang kicks off Houston Symphony's 2018-2019 season. Photo courtesy of Houston Symphony
The strings have been tuned, the brass has been polished and, after a long hot summer, Houston's classically trained musicians are ready to roll out a season of wonderful. It all begins with Mercury's free concert at Miller Outdoor Theatre, a battle of the bands between Vivaldi and Paganini. But which heavyweight composer will win it all?

Houston Symphony is bringing Beijing-born pianist Yuja Wang to the stage with all of the virtuosity and charisma one would expect from an opening night event. After an evening of show-stopping Ravel, we expect you'll be converts, too. But don't overlook the bright neon lights of Houston Symphony's pre-season offerings: Viva Las Vegas with the best from Frank Sinatra, Elvis Presley and Chuck Berry; and the Hollywood-famous compositions of John Williams in Rebels, Raiders & Superman.

ROCO has performances scheduled all over town, bringing their board game-inspired season, Games People Play — including Checkmate, Queen of Hearts and Ticket to Ride — to venues large and small. 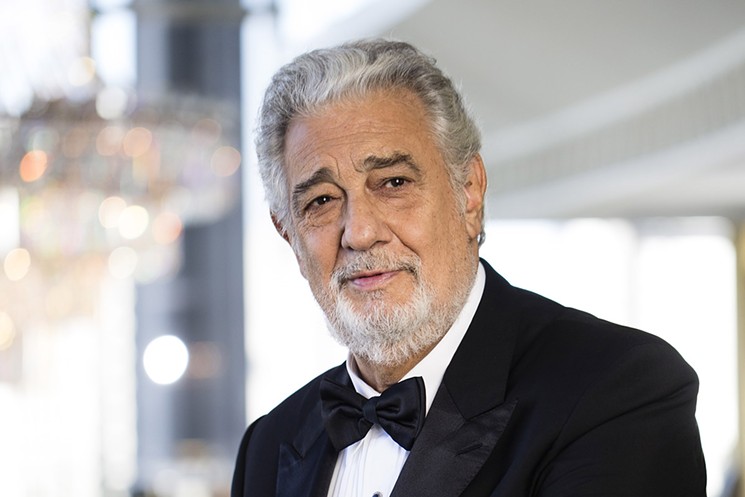 Plácido Domingo returns to Wortham Theater Center for a sold-out, one-night-only concert event marking the reopening of the Wortham Theater Center after Hurricane Harvey.
Photo by Kaori Suzuki
Perhaps the biggest excitement of all is that Houston Grand Opera will finally — finally — return home to Wortham Theater Center after last fall's flooding. It's a serendipitous homecoming: Plácido Domingo was there 30 years ago when the venue first opened — singing the role of Radames in Verdi’s masterpiece Aida — so it's only fitting that he'll be here again as HGO returns to its creative home. (Concert-only tickets are sold out; check the box office for gala dinner package availability.)

It's an exciting season for Opera in the Heights, too. After being named a Houston Theater Awards finalist for Best Musical with last year's Candide, we're all looking to see if lightning will strike twice. Donizetti's opéra comique, La Fille du Règiment — with its famous aria challenging the tenor to hit all those high Cs — opens the season.

In a rare Houston appearance, legendary pianist Richard Goode will be tinkling the ivories with Da Camera. To celebrate Artistic and General Director Sarah Rothenberg's 25th year with the chamber music and jazz organization, she'll join Goode to perform Schubert’s Fantasy in F Minor for piano four-hands. Rothenberg last performed this masterwork in 2007 with Leon Fleisher.

For some international flavor, Houston Symphony brings back its popular (and free) Fiesta Sinfónica. Other cross-cultural offerings include the South African musical stage play Africa Umoja!, with its special tribute to the late Nelson Mandela; a celebration of International Day of Peace at Rothko Chapel; and we'll be treated to a world premiering composition by Cuban-Spanish composer Leo Brouwer with Brazilian Beats, presented by Apollo Chamber Players.

Hometown talent Ronnie Coleman Jr. may have made international headlines with his "Bayou City Funk," but the local artist and his band Merlot Music are keeping it local when they perform live versions of hits from Coleman's catalog.

Da Camera opens its season with legendary pianist Richard Goode; he'll be joined by Artistic and General Director Sarah Rothenberg who is celebrating her 25th year with the organization.
Photo by Steve Riskind
Discover more classical music goodness below:

September 21, Re-Gifting with Royalty, Ars Lyrica at The Hobby Center

September 21, International Day of Peace with Silkroad Ensemble, Rothko Chapel in partnership with Moody Center for the Arts

September 22, ROCO in Concert: Checkmate, ROCO at The Church of St. John the Divine

September 29, This Is Why I Sing, Houston Chamber Choir at South Main Baptist Church

September 29, Rhythm & Wind, WindSync at Miller Outdoor Theatre
KEEP THE HOUSTON PRESS FREE... Since we started the Houston Press, it has been defined as the free, independent voice of Houston, and we'd like to keep it that way. With local media under siege, it's more important than ever for us to rally support behind funding our local journalism. You can help by participating in our "I Support" program, allowing us to keep offering readers access to our incisive coverage of local news, food and culture with no paywalls.
Make a one-time donation today for as little as $1.