Of the more than 200 images that will go on view June 23, music lovers can look forward to images of Selena, Salt N' Pepa, Run-DMC, David Bowie, Grace Jones, Diana Ross, Cardi B and Queen Bey herself, wearing that fabulous floral headpiece from when Tyler Mitchell photographed her for Vogue's September issue.

Royal watchers know that Cecil Beaton did portraits for the British royal family from 1930 until his death in 1979, and the exhibit includes his photos of debutantes, ball gowns, and Princess Natasha Paley.

It will be one of the most truly all-generational shows we've seen in a while: movie fans and those who follow Hollywood celebs will see photos of Marlene Dietrich, Gloria Swanson and Audrey Hepburn; while the younger crowd will dig seeing pics of Matt Dillon and Rami Malek.

"Because of the wide chronological range of the show and the thematic groupings, it will appeal to everybody. There’s certainly going to be other faces and names that everyone will recognize and appreciate and have a favorite. Even back to old Hollywood stars from the late 1930s to fashion icons to present day," says Lisa Volpe, MFAH's associate curator of photography. "We’ve been sure to include Houston personalities: James Harden, Simone Biles, Solange, and of course Tyler's cover for Vogue."

Volpe tells us that the exhibition was originally organized by the J. Paul Getty Museum and curated by Paul Martineau, Getty's associate curator of photographs. MFAH has added from its own collection and supplemented with local loans and 16 costumes (including attire gifted by Lynn Wyatt and Carolyn Farb).

But the true story here is the history of photography — from gelatin silver prints, negatives and darkrooms to inkjet prints and digital photography — as well as the evolution of clothing advertisements to an art form. And yes, the exhibit includes a trio of vintage Brownie cameras.

"While we’re celebrating the idea of fashion designers, we did want to keep the focus on fashion photography. We do have moments when we talk about the development of color photography and how magazines embraced color, a section on photography experimentation, and photographers that were responding to the cultural shifts in the 1920s and 1930s by applying photographic techniques," says Volpe.

James Harden, GQ, 2018, on view in "Icons of Style: A Century of Fashion Photography."
Photo by Erik Madigan Heck, © Erik Madigan Heck / Trunk Archive, courtesy of Museum of Fine Arts, Houston
Volpe points out how pioneering fashion photography emphasized the outfits with clearly visible silhouettes, and then contrasts those early efforts with the chaotic photo of James Harden shown here.

"This is by a younger contemporary fashion photographer Erik Madigan Heck; he was introduced to us through his gallery, Staley-Wise Gallery, that has a specialty in fashion photography. What we love about Erik's work is he’s turning typical fashion photography on its head. Erik plays with that, the background and the outfit are so similar they almost fade together," says Volpe. "That’s so exciting, this new direction."

The exhibition begins with the early 20th century when Vogue and Harper's Bazaar sought out avant-garde photographers, then moved to the recruitment of famous actors as models, and through evolutions of style from Art Deco to Surrealism. If the 1950s marked the Golden Age of fashion photography, full of glamour and couture, then the 1960s and 1970s were a time of catalyst and inclusion, bringing along with it the use of more African-American models. 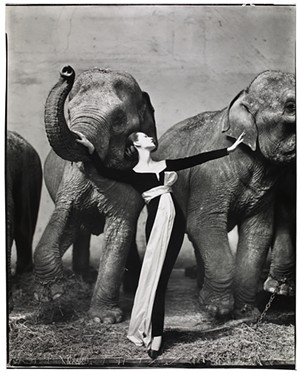 Shown: Dovima with Elephants, evening dress by Dior, Cirque d’Hiver, Paris, August 1955
Photo by Richard Avedon, © The Richard Avedon Foundation, courtesy of Museum of Fine Arts, Houston
Volpe has been tapped for more than a few lectures (members, preview and public) about the "Icons of Style" exhibit, where she'll present an overview of the show. She's also planning a lecture, "Making an Icon," that explores the background behind Richard Avedon's iconic photograph of Dovima for Harper's Bazaar, wearing an evening dress by Dior, posed between elephants at a Paris circus in 1955. At the time, Dovima was one of the last great models of haute couture, before models morphed into girls-next-door types, and the gown she is wearing was the very first Dior dress designed by Yves San Laurent. The composition also marked a departure from the stiff mannequin-like poses, and opened the door to a new era in fashion photography.

"Icons of Style: A Century of Fashion Photography" is scheduled for June 23 through September 22 at 10 a.m. to 5 p.m. Tuesdays and Wednesdays, 10 a.m. to 9 p.m. Thursdays, 10 a.m. to 7 p.m. Fridays and Saturdays, 12:15 to 7 p.m. Sundays at the Museum of Fine Arts, Houston, Caroline Wiess Law Building, 1001 Bissonnet. For information, call 713-639-7300 or visit mfah.org. Free to $17.
KEEP THE HOUSTON PRESS FREE... Since we started the Houston Press, it has been defined as the free, independent voice of Houston, and we'd like to keep it that way. With local media under siege, it's more important than ever for us to rally support behind funding our local journalism. You can help by participating in our "I Support" program, allowing us to keep offering readers access to our incisive coverage of local news, food and culture with no paywalls.
Make a one-time donation today for as little as $1.