Glide, skate, and celebrate LGBTQ+ pride at Rainbow on ICE. Photo by Katya Horner
Discovery Green, the beloved crown jewel of downtown's public park space, hosts more than 600 events per year and attracts more than 1.5 million visitors annually, so to the untrained eye, it might seem hard to find new ways to create and sustain programming that is fresh and new year over year. Yet, leave it to the park's staff, a team of savvy drag queens and one resourceful architect-cum-designer to create a new look and feel for this year's eighth annual Rainbow on ICE, taking place Friday, January 11 from 7 to 10 p.m.

"We love the fact that so many of our rainbow events - ICE, Green and our roller skating rink - become part of what people do during specific times of the year. For us to have a night to celebrate community is important to us, and we love doing it," said Barry Mandel, president and park director.

Discovery Green’s Rainbow on ICE merges a night of skating along with jaw-dropping entertainment throughout the evening. Local performance troupe Drag Houston assembled their live staged production of the hit single and viral sensation music video to Ariana Grande’s “thank u, next”. They’ll pay tribute to pop culture movie sensations such as, “Legally Blonde”, “13 Going on 30”, “Mean Girls” and “Bring It On!” as well. Add in a fashion show and the pumping beats from DJ Joe Ross, and it's a night guaranteed to stand out as one of the most memorable evenings at The ICE.

"The last time I was at Discovery Green I played the violin and ice skated on the rink to a rendition of ‘Let It Go.’ During Rainbow on the Green in 2016, I recreated part of Lady Gaga’s Superbowl Halftime Performance," Trailz said. "Every time I get a chance to perform at Discovery Green, I try to show a different side of myself. People have responded positively to that, and it shows in the increased size of our audience."

Trailz says to expect surprises, and from the sounds of it, the group is well on its way to making the night special.

"Drag Houston has been preparing and rehearsing for four weeks prior to the big event," added Reign. "We wanted to not only bring Ariana Grande’s music video to life, but we would also like to expand and bring forward performers from the movies referenced in the music video as well as a group performance of Ariana Grande’s biggest hits." 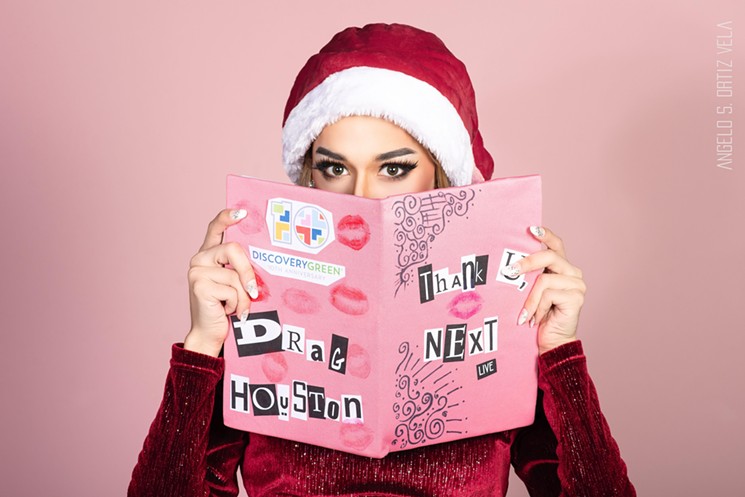 Ariana Grande's latest hit is the inspiration behind this year's entertainment at Rainbow on ICE.
Photo by Angelo S. Ortiz Vela
The festivities also include a fashion show featuring the designs of Yahiara Dehill.

Dehill graduated from Prairie View A&M University with a Bachelor of Science in Architecture. She was fascinated by green Architecture and environmentally friendly designs made out of recycled materials. Two years after she graduated, she was given the opportunity to be a part of a fashion show called Rubbish to Runway, a charity show where artists create fashion pieces out of trash or upcycled garments. She was bit by the fashion bug and has been designing ever since.

"She is married, and her husband does drag sometimes too and showcases some of her outfits. She’s done a lot of work at Hamburger Mary’s," Mandel said. "A bunch of my folks have gotten to know her and the performers [at Hamburger Mary's], and they thought it would be great to showcase outfits she’s made."

He added, "She's made lavish dresses out of newspapers, playing cards and materials like that. We thought it would be cool to do a fashion show on ice to showcase these outfits."

For skaters planning to attend, Mandel recommends arriving early as it will be easier to rent skates. The ICE opens at 5 p.m. on Friday, a good two hours before the event starts.

For those unable to make it to Rainbow, fret not. The ICE, powered by Green Mountain Energy, stays open through January 27. And there's always the Ariana Grande video of "thank u, next" to keep you full until the next Rainbow event.


Rainbow on ICE takes place 7 - 10 p.m., Friday, January 11 at Discovery Green, 1500 McKinney. For information, visit www.discoverygreen.com. The event is free to watch. To access the rink, general admission costs $11 and skate rental costs $4, tax included.
KEEP THE HOUSTON PRESS FREE... Since we started the Houston Press, it has been defined as the free, independent voice of Houston, and we'd like to keep it that way. With local media under siege, it's more important than ever for us to rally support behind funding our local journalism. You can help by participating in our "I Support" program, allowing us to keep offering readers access to our incisive coverage of local news, food and culture with no paywalls.
Make a one-time donation today for as little as $1.