The Ultimate Christmas Show (abridged) and Who's Holiday!, an adult-themed How the Grinch Stole Christmas parody told in Seussian rhyme, are being shown in repertory in Stages' Arena Theater. And never fear, Panto fans, because Buttons is back, although this year's audience participation comedy deviates from the fairytale themes of previous years to embrace a galaxy far, far away. 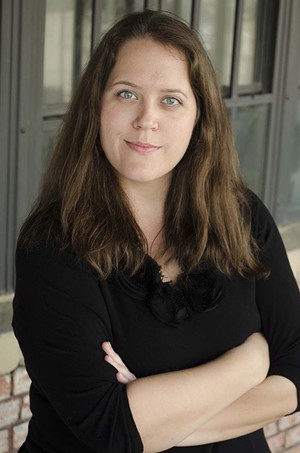 Playwright Elizabeth A. M. Keel.
Photo courtesy of Elizabeth A. M. Keel
Ryan Schabach (Buttons) and Elizabeth A.M. Keel co-wrote the script for Panto Star Force, making its world premiere, and Keel tells us that Schabach "lives and breathes gags and bits." As for how their collaborative process worked, Keel says she only had to begin a sentence before the Panto veteran chimed in to complete the thought.

"To make a holiday metaphor, we started with the structure of the plot as our tree," says Keel. "And then we hung as many colorful jokes, rock song parodies and delightful references on there as it could hold. If we could make each other laugh, we knew we were on the right track."

Keel says they wrote the script so that even those unfamiliar with the Star Wars franchise will still be able to enjoy a joyful musical comedy with a compelling story. "We approached the project on a vast Cartesian grid: we're reaching vertically from ages three and up, and across the spectrum of never-seen-'em to the most die-hard Dagobahns," she adds. So everybody will know exactly when to laugh, boo and hiss at the actors.

Even though this year's Panto is intergalactic, they're not deviating far from the formula. "I imagine that any returning fans of Panto looking forward to seeing Genevieve Allenbury back onstage are in for quite a treat. I'm afraid she's turned to the 'baddie side' this year," says Keel. "[And] it wouldn't be Panto without Buttons. I understand that a #buttonsfanclub has formed over the years; I promise the spaceships won't leave without him."

This combination play of song, dance, buffoonery, slapstick and cross-dressing also includes local references. "Even though we are traveling through space, it is to planets such as Cypress and Montrose," says Keel.

It is the Houston premiere for The Ultimate Christmas Show (abridged), a comedy that had its world premiere in 2011 and which throws every holiday tradition into the blender to celebrate Christmas, Kwanzaa, Hanukkah, Ramadan, the Twelve Days of Christmas and — the biggest fake news of all — the family newsletter. Julia Taber directs; Ronnie Blaine, Joseph "Joe P" Palmore and Gabriel Regojo take the stage.

In spite of the Dr. Seuss theme, Who's Holiday! is an adults only production and won't be suitable for anybody easily offended. For the rest of us, we'll be treated to an irreverent look at aging and jaded Cindy Lou Who who now lives in a trailer park and can trace her demise back to that fateful night in Whoville. Sally Edmundson directs; Bree Welch stars in this one-woman show.

Who's Holiday! is scheduled for December 5-30, 7 and 9:30 p.m. Wednesdays through Sundays, Stages Arena Theatre, 3201 Allen Parkway, 713-527-0123, stagestheatre.com, $25.60 to $72. (Check dates to verify which play is showing.)
KEEP THE HOUSTON PRESS FREE... Since we started the Houston Press, it has been defined as the free, independent voice of Houston, and we'd like to keep it that way. With local media under siege, it's more important than ever for us to rally support behind funding our local journalism. You can help by participating in our "I Support" program, allowing us to keep offering readers access to our incisive coverage of local news, food and culture with no paywalls.
Make a one-time donation today for as little as $1.