Houston Chamber Choir's presentation of Sergei Rachmaninoff's "All-Night Vigil" will be performed twice this weekend. Photo by Jeff Grass Photography
Houston Chamber Choir will present Sergei Rachmaninoff’s “All-Night Vigil” on Saturday and Sunday at Rice University. The choir will offer this masterpiece within the warm acoustics of the Edythe Bates Old Recital Hall and Grand Organ at Rice University’s Shepherd School of Music.

"This is an evening service that Rachmaninoff set multiple prayers to music using traditional chants as the thread that connects each of them. He composed around those prayers and chants to great effect," explained Houston Chamber Choir's founder Bob Simpson.

Wisdom and understanding are gifts of inner contemplation often enhanced by surrounding darkness. The choir will explore these gifts in a religious context in what is considered by many to be Rachmaninoff’s greatest work.

"Having already written large sacred work, but having been dissatisfied by it, Rachmaninoff thought he could do better. And so in 1910, he finished a setting of the liberatory of St. John Christmas, which is parallel to the service that would be most often done on Sundays...like the Eucharist in a liturgical church in the United States," Simpson said. "He found that he really wanted to do more than that, and thought he could be more successful. And so he turned in 1915 to the 'All-Night Vigil,' a service that is celebrated every Saturday night prior to Sundays and on special occasions. It's a very long service, and it can take a majority of the evening if all of the component parts are put into place."
click to enlarge

Performing with no accompaniment is not an easy challenge, but Houston Chamber Choir is up for the challenge.
Photo by Jeff Grass Photography
Of particular note, the Orthodox Church does not employ instruments, so all of its music is acapella. This piece, therefore, was written only for voices. In other words, the Houston Chamber Choir will be vocally naked and must maintain an intense focus on the pitch...or else, the performance will go awry.

"One of the great advantages I have is working with professionally trained musicians who are able to maintain pitch, who are skilled at making sure that their toning is spot on at all times. Having said that, these lines tend to be very long, and the general tempo is more sustained and slower. So it takes a huge amount of energy to maintain the energy and huge amount of breath control and support," Simpson said.

He also noted there will be 15 movements, so the choir won't sing without interruption.

"Before each movement there are tones that will be played on chimes that will establish the pitches for the next movement. We will have checkpoints along the way. But within the movements, we're going to rely completely on our ear and our ability to, once having started at a particular pitch level, maintain our pitch to the very end."

The “All-Night Vigil” was written during World War I. The sense of spiritual transcendence in the work was the composer's response to the chaos and suffering around him that he saw firsthand - a theme that resonates to this day.

"The juxtaposition of this beautiful work by a Russian to the atrocities that are now being carried out by Vladimir Putin are in stark contrast. I think this actually provides us with a unique opportunity to distinguish between the great works of art that the country of Russia has produced and its current leaders."

History shows that Rachmaninoff hated the communists. He fled Russia for the United States because he would not and could not tolerate the Russian form of government, and he never returned.

"He called himself the most Russian of Russians. But he was invited back a number of times and would never, ever accept. He refused to go back, so he lived in exile. He was grateful to be in the United States. He very much found the promise of freedom and the promise of living in peace because the United States opened its arms to those from other countries. It was his salvation," Simpson recalled. 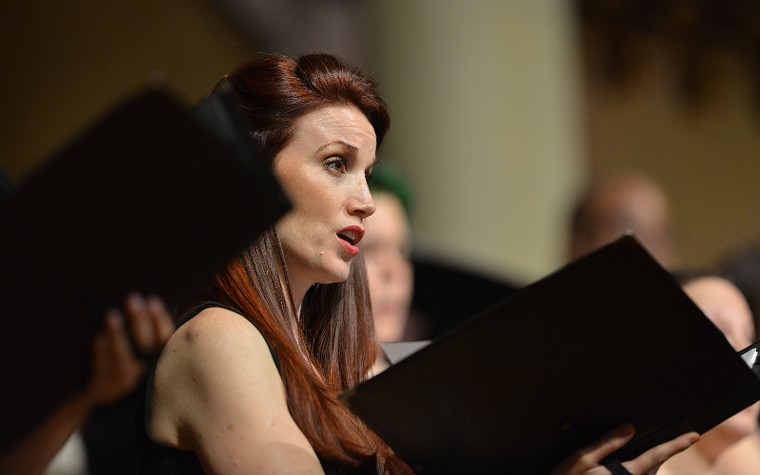 "It really was only in existence since the 1880s. Tchaikovsky was the first person to write an elaborate setting with the liturgies. So when you think about starting in the 1880s, and Rachmaninoff wrote the Vespers in 1915...by 1917, the whole field was obliterated by the Bolshevik Revolution. So we're really only talking about a 37 year period in which Russian sacred music for the Orthodox Church flourished. It's quite a remarkable little succinct moment in time. It came in a blink of the eye," Simpson said.

Houston Chamber Choir presents the "All-Night Vigil" at 7:30 p.m. Saturday and 3:30 p.m. Sunday at Edythe Bates Old Recital Hall and Grand Organ in the Alice Pratt Brown Hall at Rice University, 61090 Main. The group will release a virtual performance at 2 p.m. Sunday, May 15. For information or to purchase tickets, cal 713-224-5566 or visit houstonchamberchoir.org. $10 - $25.
KEEP THE HOUSTON PRESS FREE... Since we started the Houston Press, it has been defined as the free, independent voice of Houston, and we'd like to keep it that way. With local media under siege, it's more important than ever for us to rally support behind funding our local journalism. You can help by participating in our "I Support" program, allowing us to keep offering readers access to our incisive coverage of local news, food and culture with no paywalls.
Make a one-time donation today for as little as $1.