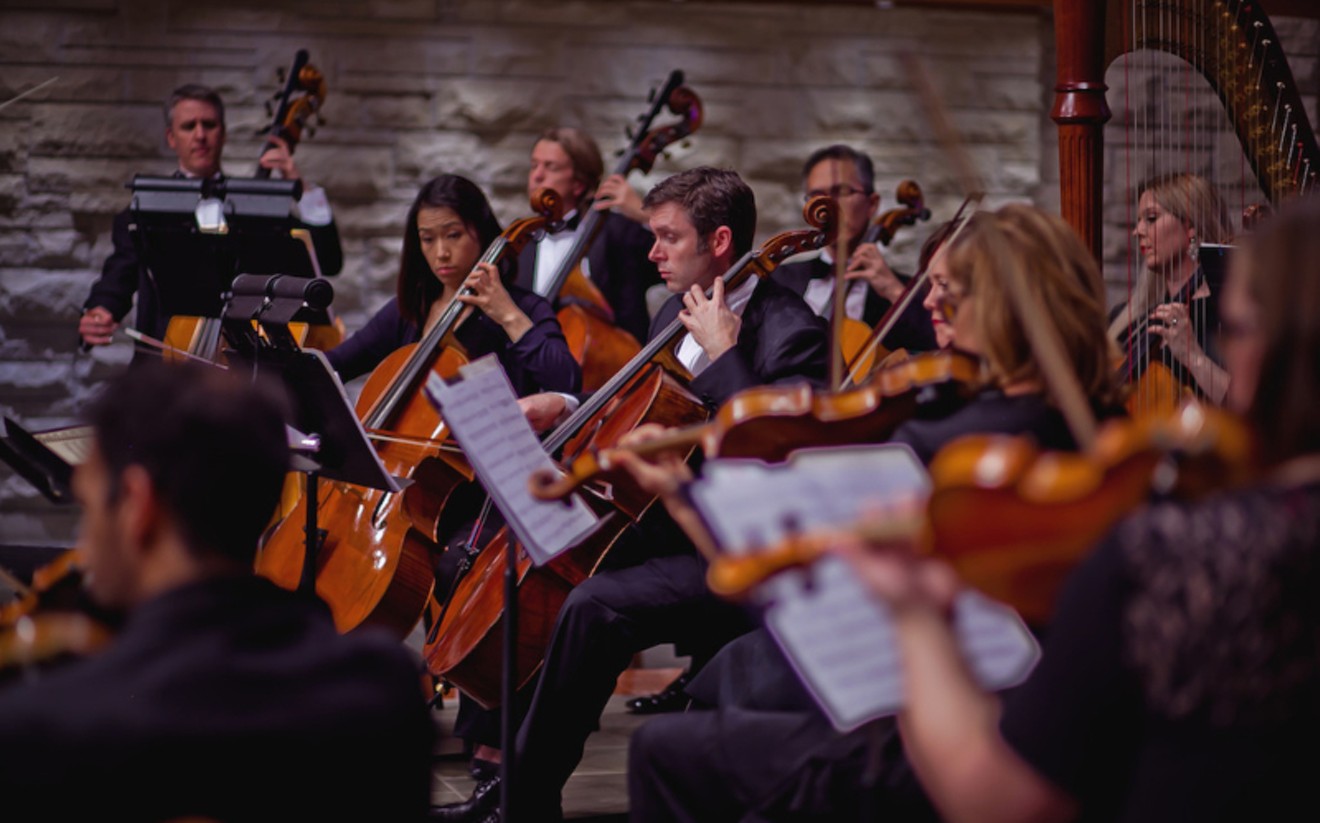 ROCO has just what Houston audeinces need this month: a conversation about climate change, and then a meditation piece. Photo by Joel Luks
There's nothing like a one-two punch to keep Houstonians alert to what's happening in the fine arts scene. ROCO is stepping into the ring this month to deliver what will be the battle royal of chamber music.

First up, the nature-themed A Stitch in Time concert takes place November 13, complete with a full-orchestra and specially-commissioned projects. The show features the Texas premiere of a new cello concerto by acclaimed composer Mark Adamo, "Last Year," which is an extended exploration of climate change, with each movement representing one of the four seasons.

November 19 brings Huang Ruo’s "A Dust in Time Passacaglia for Strings" at Asia Society Texas Center. The piece is structured similarly to a Tibetan sand mandala, and it essentially is a slowly-unfolding, 60-minute uninterrupted musical meditation.

ROCO's promise to bring living composers to the front of the conversation is as evident as possible in these two presentations, and the timing couldn't be better.

For Stitch in Time, Houstonians have experienced climate change first-hand in spades. For a city's weather known to mostly never dip below the 40s, we went through a freeze in February. Then, we experienced mercury-bursting temperatures in the summer, complete with electricity blackouts. Last month, we saw high winds that knocked out power lines. Mother Nay has a mark on Houston, and that's not even considering what is happening in other parts of our country or the world.

If you’re an artist putting out material that is relevant, yes, of course climate change will be a topic of conversation because we’re all living it.

"I don’t prescribe what composers do," said Alecia Lawyer, ROCO's Founder, when speaking about the newly commissioned pieces. "I find it really unusual that there are so many pieces about climate change. It’s what people are talking about and worried about. It wasn’t that we 'needed' to do a bunch of stuff about climate change. Instead, that’s just what people are talking about."

And that's the natural result when working with living composers. This isn't Beethoven's world anymore (although he will be present in the programming later in the day). This is our current world, and it deserves a current voice.

ROCO takes that same approach to its programming, and when the group is in organic, natural dialogue with those artists, this is the result. Composers are thinking about what they’re doing, who they are, and what's important in their lives, and that ends up being reflected in the programming.

Thus, climate change takes the shotgun seat for the November 13 concert. It will be conducted by Jeri Lynne Johnson in her ROCO debut, and the evening will feature the world premiere of Hilary Purrington’s FIFteen Project commission "Threshold," Jonathan Peters’ "Arthropod Suite," and Beethoven’s "Symphony No. 8 in F Major."

Regarding the "Arthropod Suite," Lawyer said, "Each movement is based on a bug, or a butterfly, or some other type of arthropod. It’s so cute and clever. The Houston Museum of Natural Science and Houston Arboretum gave us photos of their bugs and insects, and we’ll project those as the music is playing."

"Each movement is based on a bug, or a butterfly, or some other type of arthropod. It’s so cute and clever. The Houston Museum of Natural Science and Houston Arboretum gave us photos of their bugs and insects, and we’ll project those as the music is playing."

As for the Beethoven piece, Lawyer references the controversy about the metronome and its involvement in this particular composition. In a post-interview side discussion, she mentioned more about the "scandal."

She noted, "In 1815, Johann Nepomuk Maelzel, the inventor of the panharmonicon, patented a metronome, and Beethoven was enraptured. He immediately added specific tempo markings even to pieces already published, and to the Eight Symphony. But here’s the problem: some of his markings seem almost impossibly fast; the last movement in particular requires, I would imagine, a good deal of (let’s say) caffeine to play as marked. This has led to an interesting argument in the field of Beethoven interpretation: Is the tempo marking correct, as some claim? Did the late-Romantic penchant for slowing down Beethoven just acclimate us to lumbering symphonies? Or is the marking wrong?"

Grab your tickets now to find out. And stay tuned for the reference to "Squid Game" that Lawyer has planned, although she declined to offer any more information other than "it will be happening."

On November 19, ROCO’s Connections series continues with "A Dust in Time Passacaglia for Strings" at Asia Society Texas Center.

"I’m happy if people want to sit on the floor [and meditate]," Lawyer added.

And what could be more topical at this moment? The last few years have wrought all types of stress to our everyday lives, and never before has a need for mental health been more prevalent. Providing a break to our cerebral cortex is not exactly why ROCO planned this piece, but it certainly is a fringe benefit.

During the performance, images of a monk's mandala will be drawn and then erased throughout the hour. Lawyer describes the concert and accompanying performance as being created live from the central essence point, expanding outward to its fullness and color, and then subtracted inward to its central essence. It's a spiritual life cycle and journey, traveling from nothingness into fullness and back into nothingness.

"I view it as a meditation and a journey. My faith in God is a big part of my life, and I’ve leaned on that. I have a 22-year-old and 18-year-old. Their age group is suffering with mental health and a sense of complete isolation – not just with COVID-19 but with their own individual journeys," she said. "Everyone is looking for a journey. I invite people to journey with their spirit in a way that they feel safe doing during this performance."

Using music as a meditation ... or even as healing ... that's something we can all get behind. If these last few years have taught us anything, it is to let go, find something that brings us peace, and lean into the discomfort of not knowing what comes next but with complete faith that an answer will arrive. The soothing comfort of a sand mandala and ROCO's music can do just that if you let it.

ROCO's "Stitch in Time" concert takes place at 5 p.m. Saturday at The Church of St. John the Divine, 2450 River Oaks Boulevard. "A Dust In Time" takes place at 7 p.m. November 19 at Asia Society Texas Center, 1370 Southmore Boulevard. For information or tickets, call 713-665-2700 or visit ROCO.org. Free to $35.
KEEP THE HOUSTON PRESS FREE... Since we started the Houston Press, it has been defined as the free, independent voice of Houston, and we'd like to keep it that way. With local media under siege, it's more important than ever for us to rally support behind funding our local journalism. You can help by participating in our "I Support" program, allowing us to keep offering readers access to our incisive coverage of local news, food and culture with no paywalls.
Make a one-time donation today for as little as $1.