Climb every mountain, ford every stream, follow every rainbow, with Houston Symphony. Photo by Cameron Bertuzzi
The duo of Richard Rodgers and Oscar Hammerstein II embody the greatest musical theater writing partnership of the 20th century. They gifted the world with Oklahoma!, Carousel, South Pacific, The King and I and The Sound of Music, which amounted to a whopping 34 Tony Awards, 15 Academy Awards, two Grammy Awards and two Pulitzer Prizes. So, naturally, when the Houston Symphony ends its 2020-21 Bank of America POPS season May 28 - 30 at Jones Hall (and via livestream), it makes perfect sense to take a trip down memory lane with the songs from Broadway's golden age in "Find Your Dream: The Songs of Rodgers and Hammerstein."

In keeping with the "duo" theme, the concert will host another performing couple; Santino and Jessica Fontana who will join as guest vocalists. Those names might be familiar. Jessica has performed on Broadway in Baby It's You and Cinderella. Her dashing beau, Santino, has starred on the CW hit TV show Crazy Ex-Girlfriend and won a Tony Award for his performance in Tootsie. Oh yeah...he was also the voice of Prince Hans in the 2013 blockbuster hit Frozen. (Cue the screaming teenage girls.) The Fontanas, who made their Houston Symphony debut in 2016's Very Merry POPS concert, will once again grace the stage, backed by the orchestra and maestro Steven Reineke.

The couple described to Houston Press what people can expect from the concert.

Santino said, "The set list includes their greatest hits along with great orchestrations and arrangements, most of which are from the Broadway productions. With the pandemic, the symphony had to pull back on the number of players to adhere to safety protocols, and these charts were written for a number of musicians that is typically the size of a Broadway orchestral pit."

Given the couple's familiarity with Broadway, that should work in their favor. Also, for the crowd's benefit, the couple has performed many concerts together, which adds an interesting dynamic since the on-stage chemistry is baked into the relationship. They first met in 2011, and their whirlwind romance and eventual nuptials in 2015 were covered by The New York Times. The couple are so perfectly synced that they more often than not finish each other's sentences.

"It’s a mixed bag [performing with your spouse] because you’re both excited that your spouse is there, and you’re more nervous than normal because it’s your spouse," Santino said. "It’s fun and surreal because it’s the person you spend all your time with - especially this year while wearing your pajamas and lounging on the couch in front of them. It’s also comforting. You feel instantly comforted by seeing your partner's face up there," Jessica added. 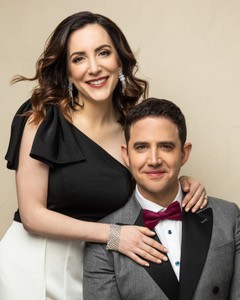 Jessica and Santino Fontana are this weekend's special guests with Houston Symphony's "Find Your Dream: The Songs of Rodgers and Hammerstein."
Photo by Matthew Murphy
The "Find Your Dream" concert will mark the first time The Fontanas have performed with others in the room since the start of the pandemic. It brings with it a feeling of relief and hopefully a signal that the performing arts industry is turning the corner on COVID-19.

"We feel relieved because we’re fully vaccinated. The Houston Symphony has been very thorough with the safety protocols, so we feel protected in that way. We can't predict what it will feel like being on stage since it's our first time performing in person, but we’re thrilled for the opportunity, and this is the beginning of the next phase of whatever the new normal will be," Jessica said.

As previously mentioned, Santino is no stranger to working without a live audience. His work as a voice actor in Frozen has given him plenty of experience...or at least five days' worth of experience.

"The movie took two-and-a-half years to complete, but I worked only five days. And one of those days was just me making grunt noises. It was bizarre putting in such a small amount of time for something that became a huge success. I also had a huge secret [since you never see my face in the movie]. We went ice skating one Christmas, and there were girls dressed as Elsa. It would blow their mind if I told them who I was. It’s a real gift to be a part of Frozen," he said.

The stories of his involvement with the movie only get better from there.

"We went to Canada once, and we drove through customs. They asked me what I do for a living, and I told them I’m an actor. They asked if I've appeared in anything they would know, so I told them about Frozen. The second you tell someone about that, they want pictures. They know the music. They’ve seen the movie, or their family has seen it. It’s an amazing club to be a part of," he said.

Whether its working on one of the largest Disney successes or finally getting back to the stage, it's an obvious observation that The Fontanas love musical theatre. America, by large, has found an appreciation for musical theatre as well.

Jessica said, "I think most musicals are inherently joyful. When you can’t speak about being overcome with emotions, you sing. And when you can’t sing, you dance." Santino followed, "Musicals remind us about the human condition. When you’re expressing things you're feeling so greatly, you do it with amazing songs. We’ve all been pent up and trapped this last year, and now is a great time to be reminded of what it's like to express oneself."

As Rodgers and Hammerstein messaged to the world via one Mother Abbess to an impressionable Maria, we must "climb every mountain, ford every stream, follow every rainbow, 'til you find your dream." It looks like this couple has done just that, singing once more on stage in the art form they both love so much.

Houston Symphony's "Find Your Dream: The Songs of Rodgers and Hammerstein" takes place at 8 p.m. Friday and Saturday and 2:30 p.m. Sunday at Jones Hall, 615 Louisiana. For more information, call 713-224-7575 or visit houstonsymphony.org. Livestream tickets for Saturday's performance are available for $20.
KEEP THE HOUSTON PRESS FREE... Since we started the Houston Press, it has been defined as the free, independent voice of Houston, and we'd like to keep it that way. With local media under siege, it's more important than ever for us to rally support behind funding our local journalism. You can help by participating in our "I Support" program, allowing us to keep offering readers access to our incisive coverage of local news, food and culture with no paywalls.
Make a one-time donation today for as little as $1.