A Stoppard, A Diva, A Deadbeat: Just Some of Main Street Theater's 2019-20 Season

Celeste Roberts playing Maria Callas in Master Class Photo by RicOrnelProductions
There's comfort, challenge and collaboration among the main stage offerings in the new season announcement today unveiled by Main Street Theater. To start with, there's a Tom Stoppard play, something Main Street has always loved and felt at home with (Coast of Utopia). In The Hard Problem, Stoppard explores what makes humans any different from advanced artificial intelligence.

There's also comfort to be found in returning to the same writing team that gave Main Street its winter holiday play for the last two years with Miss Bennet: Christmas at Pemberley. Lauren Gunderson and Margot Melcon have written a related play, The Wickhams: Christmas at Pemberley, now from a different perspective when the despised Mr. Wickham becomes an unexpected guest.

In Master Class by Terrence McNally, Celeste Roberts takes on the challenging, larger than life role of the opera diva Maria Callas who reflects on her celebrated if not always happy life as she runs a dance class.

Challenge and collaboration come with Pulitzer Prize nominee Elliot, A Soldier’s Fugue, the first part of a trilogy about a Puerto Rican military family by Quiara Alegría Hudes. The day after Main Street's opening night, Stages Repertory Theatre will open with Water by the Spoonful, Part II. The two plays will run concurrently. And Mildred's Umbrella will host a reading of The Happiest Song Plays Last — the final part of the trilogy.

Molly Smith Metzler (Orange Is the New Black, Shameless), offers her take on new motherhood in Cry It Out as two neighbors commiserate over their sudden at-home-with-baby status with its special challenges all their own.

"I seek out plays that will evoke a sense of curiosity in both our audiences and our artists," Main Street Theater Executive Director Rebessa Greene Udden says.

The sixth play of the 2019-20 season will be announced later.

As a special extra, Guy Roberts of Prague Shakespeare Company returns to Houston and Main Street to present his one-man, special version of Hamlet in which he plays all 17 characters in a 90-minute run.

Here, in more detail are the upcoming adult and youth seasons at Main Street.

If there are nothing but facts and matter, what is consciousness? This is what scientists have deemed “the hard problem.” In Tom Stoppard’s brilliant and most recent play, Hilary, a young psychology researcher at a prominent brain science institute, is nursing a private sorrow while delving into examination of the hard problem at the think-tank. Is the day coming when the computer and the MRI scanner will answer all the questions psychology can ask? Or is there more to being human… Hilary’s personal journey alongside her professional exploration takes the audience on a ride through the mind and heart like only Tom Stoppard can. 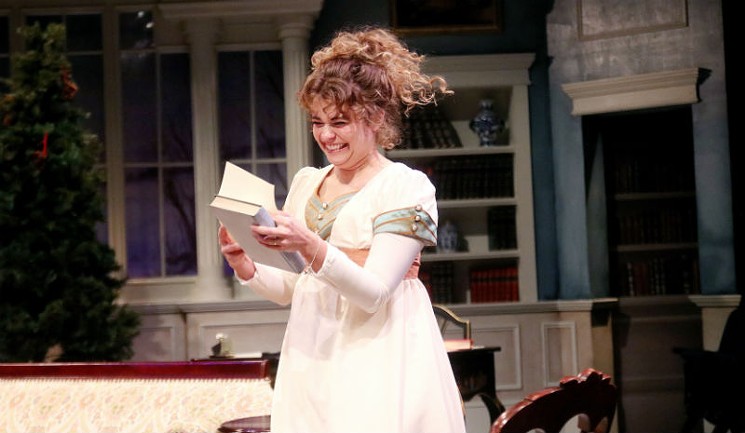 Skyler Sinclair will reprise the role of Lydia, the sister with the unfortunate husband.
Photo by Pin Lim

Regency romance is back for the holidays with Lauren Gunderson and Margot Melcon’s The Wickhams: Christmas at Pemberley—a companion piece to the duo’s delightful Miss Bennet: Christmas at Pemberley—both continuations of Jane Austen’s popular novel, Pride and Prejudice. As the events of Miss Bennet unfold upstairs at Pemberley, the servants below stairs find themselves in the midst of a different holiday scandal. An unwelcome visitor has stumbled into the hall in the middle of the night—Mr. Darcy’s nemesis and Lydia’s incorrigible husband, Mr. Wickham! Skyler Sinclair will reprise the role of Lydia from Miss Bennet in The Wickhams.

Elliot Ortiz is a young soldier, like his Pop was before him, like his Abuelo before that. But despite the things they share—their love of music, their love for each other, and their experiences of war—even when they desperately need to communicate, they just can’t seem to make it work.

This powerful portrait of a Puerto Rican military family by Pulitzer Prize winner and Tony Award® nominee Quiara Alegría Hudes (In the Heights, Water by the Spoonful) is a breathtaking symphony of music, memories, and the things that mark our bodies…and our souls.

Houston audiences will have the rare opportunity to follow Hudes' Elliot Trilogy playing concurrently. Main Street's production of Elliot, A Soldier's Fugue, Part I of the Trilogy, and Stages Repertory Theatre’s production of Water by the Spoonful, Part II, which open 1 day apart in February. Mildred’s Umbrella will produce a staged reading of the final installment of the trilogy, The Happiest Song Plays Last, during the first week of March 2020.

On maternity leave for the first time, Jessie and Lina tiptoe to their shared backyard for a precious cup of coffee and a chat during naptime. This new comedy takes an honest look at the absurdities of being home with a baby, the dilemma of returning to work, and how class impacts parenthood and friendship. A whip-smart exploration of new motherhood from Molly Smith Metzler (Orange Is the New Black, Shameless), Cry It Out captures the belly laughs, raw rage, and secret confidences that come with the early days of parenthood.

Inspired by a series of master classes the great diva conducted at Juilliard toward the end of her career, this fiery drama puts Maria Callas at center stage again as she coaxes, prods, and inspires students—"victims" as she calls them—into giving the performances of their lives while revealing her own. As she slips off into memories, we experience her days at La Scala, her marriage to Meneghini, and her great doomed love for Aristotle Onassis. But the dazzling theatricality comes from Callas' emotional explosions, her cutting wit, and the soaring music as each student sings an aria that exposes the Divina's vulnerabilities … and her genius.

Season Extra
Prague Shakespeare Company’s
Hamlet
By William Shakespeare
Adapted, Directed, and Performed by Guy Roberts
One man. Seventeen Characters. Ninety Minutes. In his tour-de-force one-man presentation of Hamlet, Guy Roberts presents unique insights into the mind of Shakespeare’s greatest and most famous creation. Using only Shakespeare’s words, in a conflated text that incorporates the First Folio (with additional text from the First and Second Quarto), the audience experiences the world of the play through Hamlet’s eyes – only seeing and hearing the scenes and moments that the character Hamlet himself experiences in the play. Taking this singular journey with the Prince of Denmark, audiences will understand the actions, themes and motives of the play’s main character as never before. Whether seen as story of devastating human domestic passions or a suspenseful political mystery of intrigue, revenge and betrayal, the tragedy of Denmark’s “sweet prince” continues to challenge and inspire.

Originally performed 10 years ago in Prague and on tour in Houston, TX USA (in association with Classical Theatre Company, JJ Johnston Artistic Director, who also co-directed the Houston version with Roberts), the production drew rave reviews. This new version builds on Roberts’ ten years of growth as an artist since the original production. PSC Artistic Director Guy Roberts starring as Hamlet, states, “People change, grow and develop, as does a cultures’ response to an artistic work. The world is very different today than it was ten years ago, and so my Hamlet must likewise grow and change. It would be impossible and ill-advised to simply remount a decade old success. It is incredibly exciting for me to once again, after ten years, examine Hamlet, the play and man.”

And in children's theater:

A Year with Frog & Toad
Based on the books by Arnold Lobel
Family Performances: September 29 - October 26, 2019
School Matinees: September 24 - October 25, 2019
Recommended for Pre-Kindergarten and Up

The Best Christmas Pageant Ever
Based on the book by Barbara Robinson
Family Performances: November 10 - December 21, 2019
School Matinees: November 5 - December 19, 2019
Recommended for Kindergarten and Up

The Musical Adventures of Flat Stanley
BASED on the book Flat Stanley by Jeff Brown
Family Performances: March 1 - April 4, 2020
School Matinees: February 25 - April 3, 2020
Recommended for Kindergarten and Up