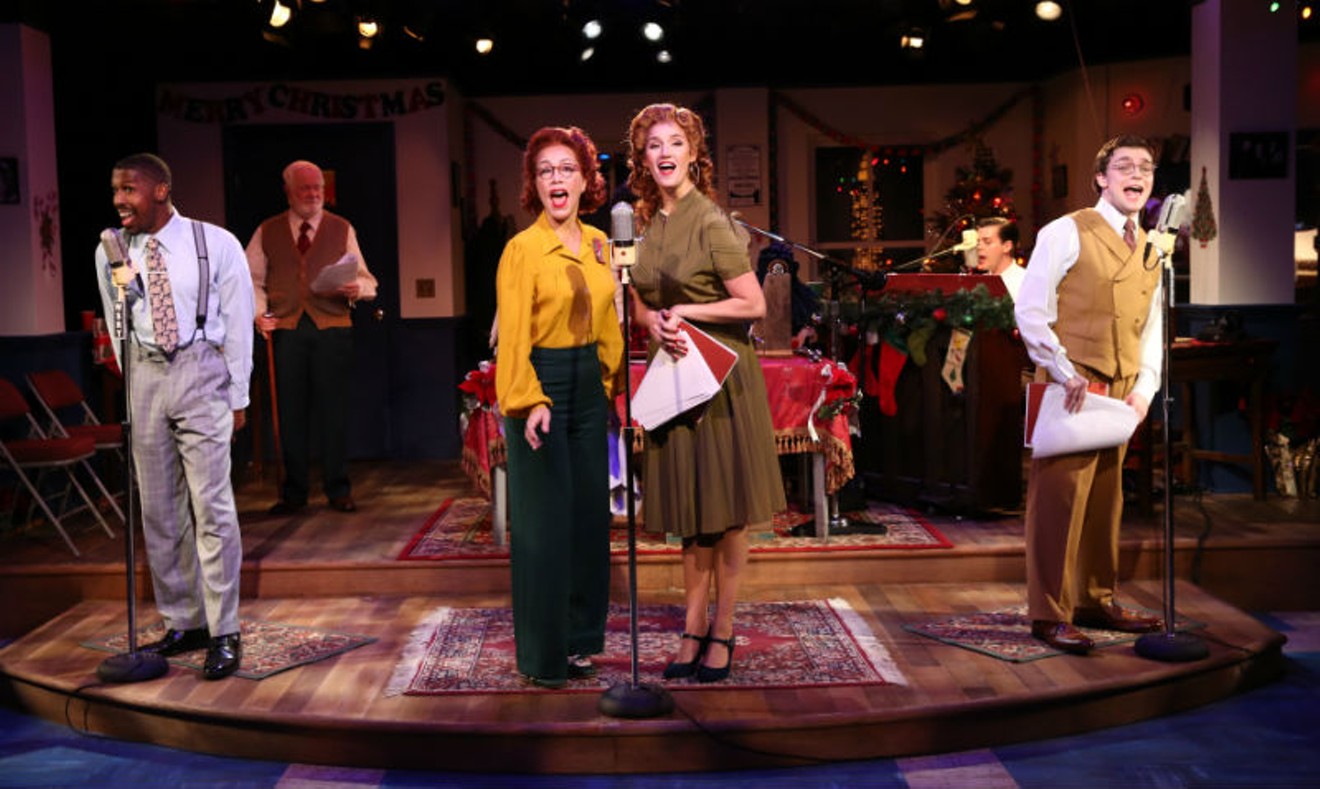 The cast of Stages' production of Miracle on 34th Street: A Live Musical Radio Play Photo by Amitava Sarkar
In one of two final productions in the theater space that has been their home base for 34 years, Stages Repertory Theatre is putting on the iconic Miracle of 34th Street - with a twist.

Miracle on 34th Street: A Live Musical Radio Play looks at the story from the aspect of seven radio voice actors from 1947 bringing to life the classic tale of the last-minute Santa Claus for the Macy's Thanksgiving Day Parade who believes he is the real Kris Kringel.

And with all the audience members cast as the "live studio audience" expect to see applause signs light up asking you to clap your hands at appropriate moments.

Mitchell Greco is the director/choreographer in charge of the two-act production and said besides the fact that he loves directing shows for the holidays, he just couldn't pass up the chance to try something new.

"It's based off the 1947 Lux Radio [Theatre] broadcast of Miracle on 34th Street. Since there wasn't really television yet they would take adaptations of popular movies and make radio plays of them to be broadcast to listeners at home to enjoy. They often included some of the original stars of the movies.

"This version is based off that broadcast. It's been expanded a little bit with some original music as well as traditional Christmas music you'd expect to hear," Greco says. It takes place in a radio recording studio in New York City.

"It's not something I’ve done before," Greco says. "I love directing shows for the holidays. I love the material and getting to work with people over the holidays is really fun. Radio plays, they’re done all over; they're wildly popular but I'd never seen one. And the music, the arrangements are beautiful."

The requirements for actors in this production included flexibility and a high level of musicianship, Greco says. "Every actor plays more than one character. You get to see them change their voice and their physicality as seven actors play over 40 characters. And a really good musical ear because the score is arranged in a way that it evokes the Big Band music of the 1940s, really dense chord structures to give it that authentic sound. So they have to be spectacular musicians on top of everything else."

Another challenge in the production was that all the sound effects had to be created live, Greco says. "So instead of a recorded sound of a car, we have to make what a car sounds like. How to make these sounds from the materials they would have had available in 1947. So there was a lot of playing around with that."

"There was a little bit of playing around with the casting of who gets what character. It's been a lot of fun," Greco says.

Performances are scheduled through December 15 at 7:30 p.m. Wednesdays and Thursdays, 8 p.m. Fridays and 2:30 p.m. Saturdays and Sundays in the Arena Theatre at Stages Repertory Theatre, 3201 Allen Parkway. For information call 713-527-0123 or visit stagestheatre.com. $25-$77.
KEEP THE HOUSTON PRESS FREE... Since we started the Houston Press, it has been defined as the free, independent voice of Houston, and we'd like to keep it that way. With local media under siege, it's more important than ever for us to rally support behind funding our local journalism. You can help by participating in our "I Support" program, allowing us to keep offering readers access to our incisive coverage of local news, food and culture with no paywalls.
Make a one-time donation today for as little as $1.