Rec Room with Julia Fox as Gretel adds a wonderful Gothic perspective to the Engelbert Humperdinck work Hansel and Gretel. Photo by Natasha Gorel
Hansel and Gretel
German composer Engelbert Humperdinck was Richard Wagner's protege. He helped stage the premiere of Parsifal at Bayreuth, the theater Wagner built for himself, and even wrote some connecting music for the “Transformation Scene,” when the set couldn't be changed quickly enough. Humperdinck was also Wagner's most devoted acolyte, in thrall to opera's mythic monster. He tried his entire career to get out from the shadows, but he was hooked. Wagner's influences on harmony, texture, and orchestration obsessed him. You can almost hear the Titan humming in the background during certain passages of Hansel and Gretel (1893), Humperdinck's greatest success. Although there's plenty of heavy neo-romanticism throughout the score, H&G is leavened, saved, if you will, by a youthful naivete and an abundance of folk tunes and dances, bird song, heavenly choir, and that plangent soft “Evening Prayer.” The Grimm tale is buoyed and sweetened.

Rec Room, in a reprise of their holiday hit from last season, adds a wondrous Gothic perspective. Splendidly so. This is both dream and nightmare, a tale of two rambunctious tykes lost in the wood at the mercy of an evil witch, who keeps them captive long enough to fatten them up so she can bake them into gingerbread. Talk about your fairy tale archetypes! Director Matt Hume adds a plethora of his own fantasies: pill-popping harassed mom; ne'er-do-well father who carries a six-pack with his bindlestiff of sausages; a cake that descends from on high to tempt the kids; fey Dew Fairy; creepy Sandman who resembles Disney's crone from Snow White; and, of course, the Witch herself, tossing flour like pixie dust as she wields a cleaver – Julia Child on meth. And let's not forget the most marvelous magic trick of all – that enchanted forest.

Conjured out of the larger of the small Rec Room theaters on Jackson Street by designer Stefan Azizi, the woods are this production's prima donna – forbidding, haunting, beautifully dank, dark and inviting. Wreathed in banks of fog, the spectral forest creaks underfoot and overhead, all vines and shadows. A Victorian lamppost recalls Jack the Ripper. It's just the right type of spooky for this updated opera classic.

Rec Room has rearranged the singers this year, adding a frisson of gender displacement that keeps the tale both relevant and edgy. Mezzo Megan Berti, so utterly psychotic as the Witch last time, is cast as Hansel. Her voice is rich and resonant, each word completely clear as crystal. She has great fun being a boy, but I do miss her demented wicked Witch. She was unassailable.

Tenor Chaz Corder, studying for his Masters in Music at the University of Houston, supplies this year's manic energy to the Witch, flinging his Rastafarian dreadlocks with panache and cooking up a storm. As Mother, he's a harried gorgon, throwing back pills to keep an even keel, or chugging back Dad's beer and then crushing the can. A ball buster.

Soprano Julia Fox reprises the role of Gretel, a tomboy in crotcheted Afghan. (Clair Hummel's costumes are a crafty melange of thrift store punk.) Fox's diction gets lost in the higher register, but her character remains. We always know what she's thinking. Soprano Julia Engel sings both Father and that creepy Sandman with assurance. She also gets to sing one of the loveliest final scenes in all opera, when Dad and the children reunite after outwitting the witch. The trio of female voices prompts comparisons to the lush final trio in Strauss' Rosenkavalier.

Humperdinck's gargantuan orchestra is reduced to solo piano, but Catherine Schaeffer (spelled by Keith Weber in some performances) plays as if channeling Horowitz. Whatever layers and textures are naturally missing is amply compensated by her delicate phrasing. She loves her Humperdinck.

If you're worn out by visions of sugar plums, Scrooge, or ugly sweaters, sample Rec Room's Hansel and Gretel. This Germanic bonbon, infused with Rec Room's ultra-grunge spike, is the ideal antidote. 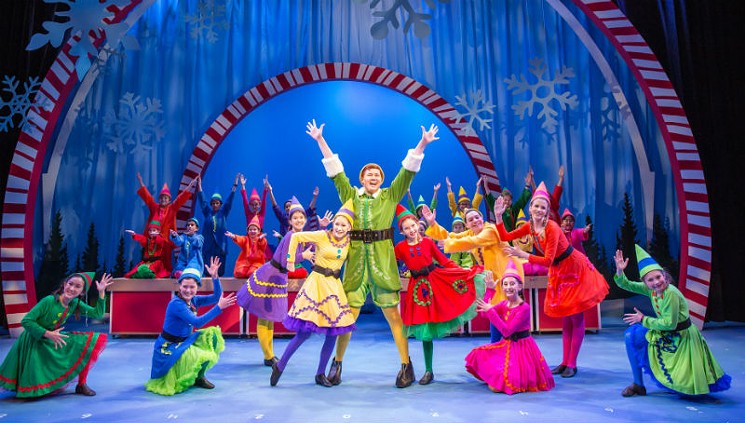 Marco Camacho delivers a star turn as Buddy in Elf, the Musical.
Photo by Christian Brown
Elf, the Musical
Listen, even Santa delivers his goodies outside the loop, so there's no reason you shouldn't hitch up your four-wheeled sleigh and fly over to Queensbury Playhouse at Town and Country Village for Elf, the Musical. (By the way: when did that idiotic tagline, “the musical” get added to a show's title. Do producers really think the audience is so clueless that we're waiting for Elf, the Interpretive Dance? or Elf, the Graphic Novel?)

Anyway, go. It's the show for the holidays, as long as you're aware that “holidays” implies “all about Santa.” That certain babe in a manger – pretty much the reason we celebrate – is never mentioned in any Broadway Christmas musical. The Great White Way only knows leggy Rockettes, sparkly trees, spinning Nutcrackers, and Christmas dinner at a Chinese restaurant. Never, ever, bring religion onto the stage if you want a successful seasonal run.

Elf (2010) never had a successful run on Broadway, even though its creators were – and still are – lauded showbiz veterans. The music's by Matthew Sklar (The Wedding Singer, The Prom [Broadway's newest smash]); the lyrics by Chad Beguelin (Aladdin); the book's by Thomas Meehan (Annie, Hairspray, The Producers, Young Frankenstein) and Bob Martin (The Drowsy Chaperone, The Prom); and the direction/choreography's by Casey Nicholaw (Spamalot, The Book of Mormon, Mean Girls). It is an impressive roster, but Broadway's a crap shoot, always has been, always will be. You never know what will grab the public and make them spend a lot of money to see a show. There is no magic formula for a hit.

Elf seemed destined for stardom since it was based on the hit holiday movie starring Will Farrell. The film was feel-good, quirky, and suited Farrell's loopy Everyman persona. The original Broadway version was all capital letters – Pizzazz. Dance routines. Nice but generic songs about family, happiness, and then more Pizzazz and Dance routines. After 57 performances during Christmas rush, Elf deflated, only to return in the 2012 holiday season after major botox. Still no classic, this latest incarnation has toured the country during December, and this is the version Queensbury reinvents with such elan.

What the company does to Elf is nothing short of miraculous, including Marco Camacho's star turn as Buddy, the human raised by Santa, who thinks he's an elf. His performance is one of the wonders of the Houston musical world, a defining moment in his career. He fills the stage – and Queensbury's new digs are as large as any old Broadway house – with such joy, such unabashed innocence, such love of performing and knowing just what to do – that whenever he's not on stage, the show gets smaller. We don't want subplot, we want more Buddy!

It's not Queensbury's fault when the show drags, the lapses are built in and have never been successfully fixed. Act II is better because it moves faster. Who can beat that opening number, “Nobody Cares About Santa,” where disgruntled Santas – at a Chinese restaurant, naturally – bemoan kids' lack of belief in them. It's Elf's showstopper, a rousing '50s blues pastiche that recalls Frank Loesser's Guys and Dolls. The sextet, with Buddy, shimmies and boogies, a chorus line in frayed red and white.

Putting on a show has never looked like so much fun. There's no reason you shouldn't join in. 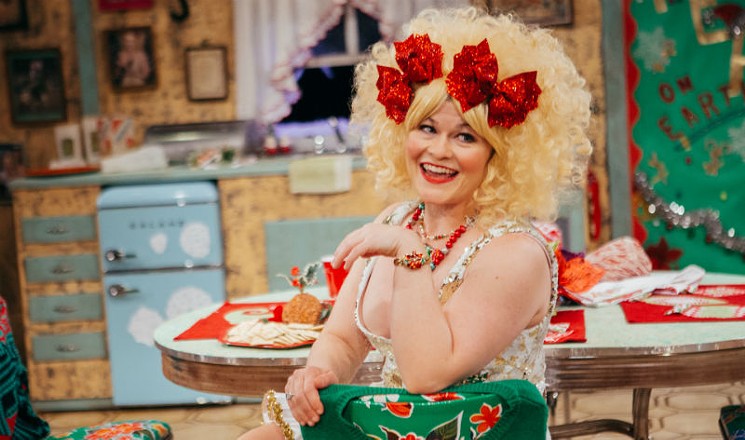 Bree Welch in Stages Repertory Theatre's production of Who's Holiday.
Photo by Os Galindo
Who's Holiday

If gay sassy Crumpet
From Santaland's missing,
Then it's Cindy Lou Who
This season you're kissing.

For holiday cheer
And R-rated delight,
Stages' Who's Holiday
Is sassy and bright.

In one act, in rhyme,
Like all Who's will do,
Her life's a poem
As she spins it for you.

Cindy's life's been a mess
She admits from the start,
While popping her uppers –
Not so good for her heart.

She drinks to excess,
But how can we blame her.
With a story like hers
It's hard to defame her.

She married the Grinch
Aroused by green weenie;
But he turned abusive –
What a horrid jade meanie!

Life in the cave
Was stinky and rough,
And innocent Cindy
Soon had enough.

When the Grinch attacked her
That most fateful night,
He fell down the hill
When she dodged to the right.

The Green One was dead,
But the smell remained;
Charged with his murder,
Poor Who was arraigned.

She served her hard time.
And many years later,
She lives in a trailer,
To all Whos – a traitor.

She planning a party
On Christmas eve.
When all send excuses,
She will not grieve.

Dressed up like a tree
In holly and bows,
Andrew Cloud's costume
Garishly glows.

And look round that trailer,
So prickly depicted,
By designer Jon Young
As camp unrestricted.

Cindy raps to the audience
While offering hors d'oeuvre,
She's smutty and chipper,
And has no reserve.

She's still a survivor,
So full of good cheer;
In hopes that her daughter
Soon will appear.

Cindy's wish may be granted,
I'm not going to tell.
Leave your kiddies at home –
All's well that ends well.

Who's Holiday continues through December 30 at 7 p.m. and 9:30 p.m, Wednesdays through Sundays at  Stages Repertory Theatre, 3201 Allen Parkway. For information,l call 713-527-0123 or visit stagestheatre.com. $28-$87.
KEEP THE HOUSTON PRESS FREE... Since we started the Houston Press, it has been defined as the free, independent voice of Houston, and we'd like to keep it that way. With local media under siege, it's more important than ever for us to rally support behind funding our local journalism. You can help by participating in our "I Support" program, allowing us to keep offering readers access to our incisive coverage of local news, food and culture with no paywalls.
Make a one-time donation today for as little as $1.