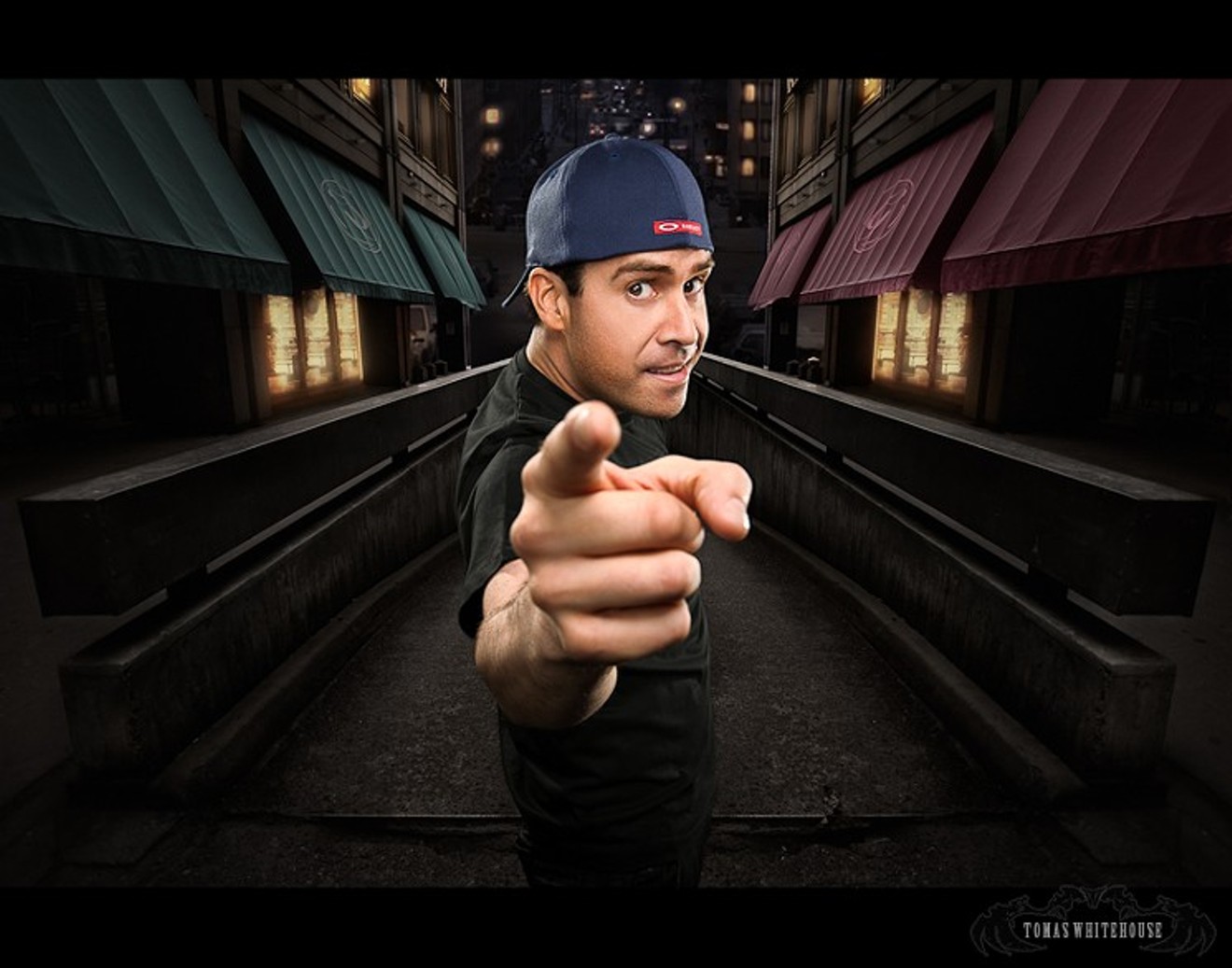 Pablo may even impersonate YOU! Photo by Tomas Whitehouse

For decades, comedian Rich Little was informally known as the “Man of a Thousand Voices” because of his uncanny ability to pinpoint verbal and non-verbal tics to form impressions both unique and uncanny.

Pablo Francisco, former MadTV cast member and an expert impressionist in his own right, estimates his
number to be a bit lower than Little’s famous tally. “I would say, let me do the calculations here,” the Arizona-born funny man thinks, “I’d say… about 28! I can’t go a hundred, a MILLION! Unless I want to do the Indian guy at the 711 – ‘You want hot dog?’ So we’re always trying to do them, but it’s so difficult these days because there are so many celebrities now. It’s so hard to pinpoint.”

Though the 45-year-old wit’s last special They Put It Out There debuted on Comedy Central back in 2011, Francisco proudly shares that he’s working on solidifying new material with the intent to record again soon. “Its gonna be a good thing! We’re working on a new hour of comedy. We’re gonna throw some old hits and some new hits and mix them up together and just celebrate the good summer. And I forget its summer time, I must be scorching hot in Houston, right? All the radiation! We tell people you want to start the party at the Pablo show - you get smashed, get the Ubers and the Lyfts and all these crazy devices that get people around.”

Audiences can expect Francisco to fly through his Rolodex of pitch-perfect character voices including Arnold Schwarzenegger, Michael J. Fox, Fozzie Bear, Busta Rhymes, Morgan Freeman and Mark Wahlberg. “We really got to [talk about] Mark Wahlberg, he’s in every movie,” the comic observes. “I’m surprised its not just like Mark Wahlberg at the ATM like: HEY MAN, YOU WANNA GET 20 DOLLARS? So you’re getting a little bit of Mark Wahlberg and the movies. Not too much politic, that’s a vicious circle. But other than that man, we’re gonna get down to simple stuff and make fun of it.”

While Francisco vows to the keep the night a-political, that doesn’t mean he’s averse to latching into the President’s strange way of speaking. “Usually [the impression] can start as soon as you see them on television. You got TRUMP, trying to get that one down. But then you also got that roommate or friend of yours that comes over, and just starts doing one - and you’re like how’d you do that? How’d you do Gene Simmons? They’re like, ‘You gotta sound like an old Jew’, and so usually it starts at the house. Then you try it in the living room, then you move up to the kitchen, then you finalize it in the shower. Then you’re like, I got it down this time!”

Sometimes an old impression finds new relevance, as has happened with Francisco’s dead-on Keanu Reeves ear-worm. After launching two of the biggest films of the summer, the comic has a whole new avenue to play off. “I’M LOVING IT! Now he’s going into [a third] Bill and Ted’s Adventure, he’s doing another one of those I hear, so its now like JOHN WICK IS BACK, UH-YEAH! Back and forth, here we go again! I think John Wick has topped the Avengers movie now, so someone take the Hulk to therapy for crying out loud? And Thor keeps on hooking up with his brother again! There’s something a little sketchy there.”

While often Francisco can latch into a specific ‘hook’ for a new voice, other nuts are just much harder to crack even for the heightened listener. “You gotta get a line. Like for the movie previews guy, it was ARE YOU READY? This summer… one friend of mine nailed him immediately, I can’t believe how good he is. Sometimes you got a facial expression you gotta nail, or sometimes it's just punching at the voice. Chris Rock took like two months. I had to have him call the answering machine so he could say ‘WHAT’S THE DEAL?’ Then it just slowly starts metamorphosing into the Chris Rock. Everybody does a Christopher Walken, but I just can’t… DO… Christopher Walken, you know? It sounds like [Jackie Mason], the ant eater from Pink Panther! Or Vin Diesel? He’s like, he’s like breathing backwards or something. Sometimes it takes a minute, sometimes it takes a year.”